Free from the NBA, Ray Allen has written the memoir "From the Outside"

A conversation with Allen about his new memoir, perseverance, race and why he will never "shut up and dribble" 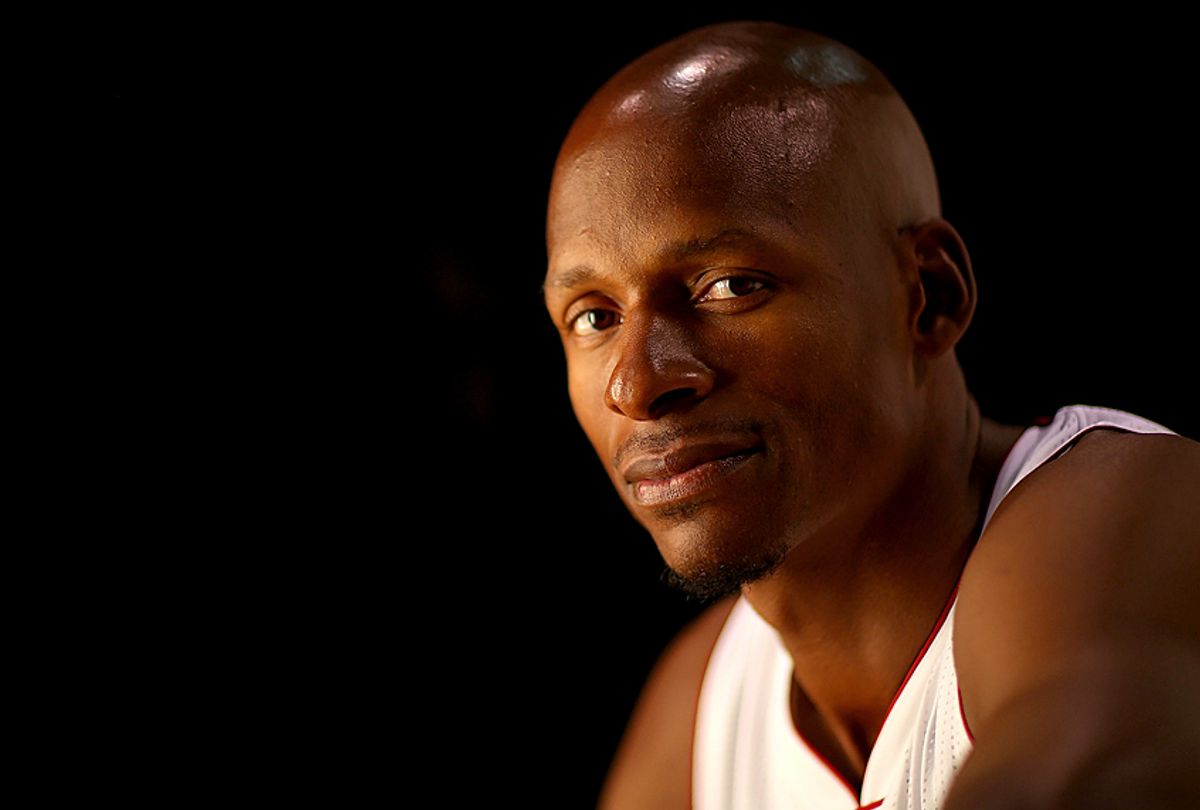 Ray Allen is unspeakably polite. While we are on the phone for this interview, he pauses briefly to listen and engage graciously with a fan who approached him on the street, and then apologizes to me before returning to my question. He also apologizes to me when he gets excited and thinks he’s cut me off. He says thank you when I comment on his phenomenal performance in Spike Lee's 1998 "He Got Game." Whenever I say anything remotely positive, even if it's in passing to a bigger point, Allen makes sure to acknowledge it. And it’s a telling quality of this superstar athlete, soon to be inducted into the Basketball Hall of Fame, who still holds the record for career three-pointers in the NBA, and has just released a memoir that chronicles his career and life, "From the Outside: My Journey Through Life and the Game I Love."

Allen has always been known for his work ethic, discipline and attention to detail. He was described as the first to arrive at the arena before a game. He had the perfect jumper. His post-game interviews were always conducted after he changed into a suit and tie. He was known for his graciousness to ball boys. He didn’t drink. He took meticulous care of his body. He's an avid reader. Paul Pierce once called him "the Barack Obama of the NBA."

But in "From the Outside," Allen goes deeper, telling the story of "how my life transformed around the game of basketball," he says. From a military kid to a first round draft pick to a two-time NBA champion and 10-time All-Star, Allen raises the curtain of the polite, reserved and professional athlete to reveal a vulnerable human always ambitious for himself while always holding himself accountable. He's candid in this memoir about his teammates, his family and his journey to legend. Yet I wondered, who is Ray Allen now that he's no longer in the NBA — now that his identity and sense of belonging is no longer tied to professional basketball? The answer is, he's free.

I was reading some interviews of yours and you said you knew you were always going to write a memoir, and in fact, you started writing one really early on when you first got drafted. Why was now the time to release it?

I wouldn't say that it was just "now is the time." I started writing it in 2015 and it's kind of when I knew I really wasn’t going to come back and play anymore. But I believe that everybody should write a book, because everybody has their truths that they have to deal with, good and bad stuff, and we have to figure out how to navigate through that. For me to be able to write a book, I get to tell people amidst all the great things that I’ve experienced in my life, I had so many travails that I had to deal with in order to get to where I was. And if you give up when you’re going through a tough time, then you never realize what good is in store for you on the other side.

The title is pretty deep. It already starts from a vulnerable place. I know that your dad being in the Air Force and moving around a lot contributed to you feeling like an outsider. I’m curious if you ever felt like that feeling went away?

No. It never goes away, because even this week when I was in San Antonio and I was around a lot of Hall of Famers, you’re the new kid again. No matter how you look at your life, if you strive to continue to improve, get better and do the things necessary to learn the world and be better in the world, there’s something new that’s always placed on your plate . . . . I’m doing something new that I’ve never experienced before and I have to be willing to be open to it. So it requires me to have conversations with people, with myself, ask questions, be vulnerable and so, in a sense, you’re always on the outside. I think a lot of times that’s the tough thing with a lot of people is they don’t want change. They don’t want to do anything different, so they’re always in a world that they’re comfortable with.

How did you cope or navigate with being an outsider throughout your life and career?

Well, basketball certainly helped. Sports helped, because I didn’t just play basketball. So all the different sports that I played allowed me to adapt into environments that I was in. That’s where you develop your friendships, you learn trust and camaraderie, and sacrifice and how to work together. You’re always trying to figure out how to belong, where you can belong, where you can fit in. When you finally do, you have this community that you’re now a part of and you build friendships and relationships with. And when you’re a military child, when that gets removed from you, you have to do it all over again.

Boston is a place really notorious for racism. How did you navigate that while there? Did it affect you?

No, I didn’t deal with it personally — anything extraordinary from anybody else. It was a city just like anything else. There are places I went, people didn’t know who I was and they treated me as a black man. Either I walk into a store and you think that I’m going to steal something or not be able to afford it. That existed everywhere that I have lived in my career, my life. I didn’t think Boston was any different. You get different treatment as a professional athlete when you move through America, especially for those that know you. In Boston, it was a little bit more difficult because we barely went outside because of that thinking — that adoration that was poured on you as a sports hero in Boston.

It’s pretty remarkable that your first acting experience was working with both Spike Lee and Denzel Washington in "He Got Game" at 22 years old. And you were incredible. What lessons do you carry from that experience?

That I can do anything, that I can do anything I can set my mind to. And I always knew it, but this reinforced it. I was nervous at first, because when you think about doing a movie and doing it with the people I did the movie with, it’s even more incredible. So when you start thinking about it, it can become intimidating. But when you focus in, you get rid of all the distractions you have in your life; it’s amazing what you can accomplish.

How does that focus and discipline continue to inform your life now that you’re retired?

My brain is programmed to think the same way at all times. So no matter what it is that I do, I hone in, lock in and do what it is that I need to do. There’s no distracting me. When I focus, I have tunnel vision. It’s like time to do this task and perform it without any interruption or distraction and I want to do it well, so I focus in, extremely. That’s probably the biggest takeaway from anything in my life, is if you want to do something well, you have to learn how to put everything else in its place and then focus on that one thing and one idea.

Since the release of the book, a lot of the media attention has been about your description of your relationships with Kevin Garnett and Rajon Rondo. Is there a part you wish people would focus on more? Or other takeaways you hope people leave with?

It’s like anything else, people are going to focus on what they want to focus on. But I would just advise people to read the book instead of trying to sensationalize it and take it out of context. Like I’ve seen people take those segments out of context and then make that like the story of the book.

It’s a shame with the media, because a lot of those people will never read the book and I think for most people, it’ll shine light on what we deal with as professional athletes. Everything is not always great, even when you win the championship, you’re still going through turmoil.

You've talked about feeling like were treated unfairly when you left Boston for Miami. It made me think about the way Lebron was treated when he first left Cleveland in 2010 and people feeling like they have ownership over you.

It’s always unfairly placed, because we’re supposed to be property of either that fan or that city, and we are our own entities. So when we make choices and decisions, they get to be our choices and decisions. I’ve been traded and it’s a terrible feeling to get traded somewhere; sometimes it’s good for you, sometimes it’s not so great for you. But whenever you have the opportunity to push your own agenda, you have to do that because you don’t have that too often. If you sign a five-year deal, you’re five years in a place where hopefully it’s a great five years, but a lot of times it’s not.

It's been great to see players combatting the gross "shut-up-and-dribble" comment from Laura Ingram.

But don’t slander me or anybody else because you’re mad that we think the way we think. We all grew up differently, and it’s okay. But if you sit in my shoes and understand, and if I sit down to talk to you, then I will definitely help you to understand where I come from and why I think the way I think. But you can’t just sit here and think about this world from a singular point of view, like this world is not just about you, this world is not just about me. I’m not over here singing my song because I want people to give to Allen University. I want everybody to be great. Because the problems that exist in this world is that we only think about what’s good for us.

Do you feel free now?

I do feel unencumbered. When you have a voice, a lot of times you have to be careful what you say, because if somebody’s writing your check, you have to be in accordance with what they believe in or make sure that your views don’t disrespect your corporation or your franchise. Now I speak solely for myself. I sit on a few different boards, so I try to help raise awareness and money and different things. But for the most part, I’m not owned or operated by anybody. I can do the things that I want to do and I can travel the world and I can touch people and ask people what they need and how can I help them and it’s all on my terms. And there’s nothing in the world like it.