The king of Wakanda had some difficulty early on, but he eventually got the hang of "Black Jeopardy" 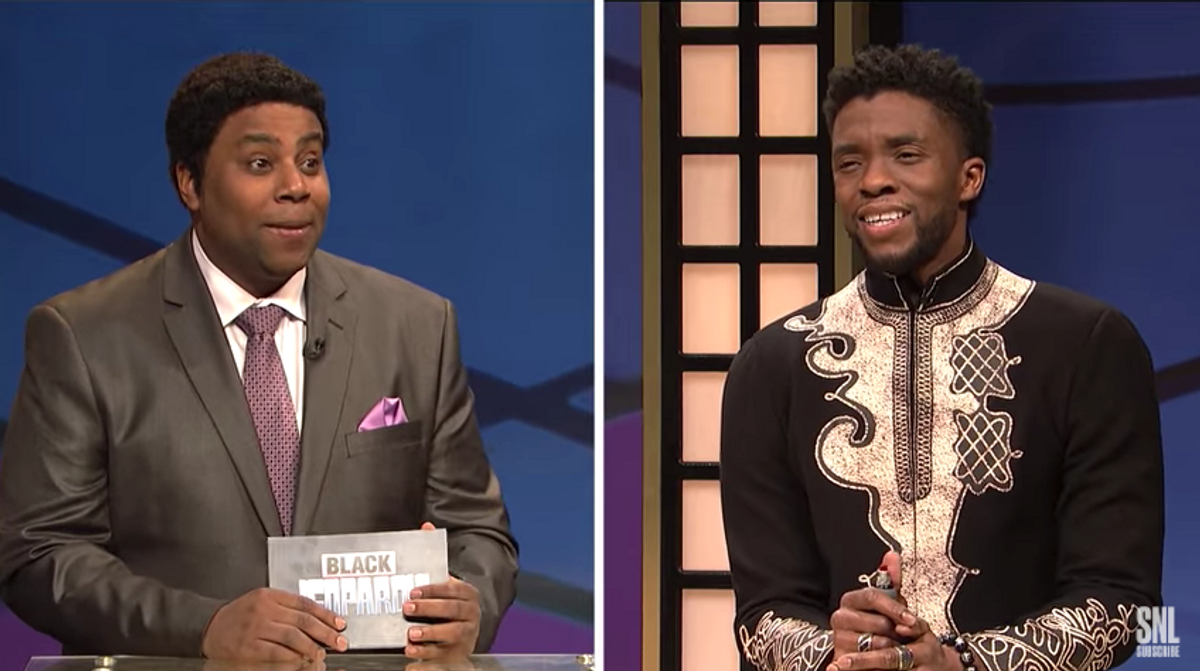 Chadwick Boseman, one of the stars of the record-setting blockbuster Marvel film "Black Panther," hosted "SNL" on Saturday, and he certainly lived up to the hype.

In the recurring infamous sketch on the show known as "Black Jeopardy," Boseman played as his "Black Panther" character, T'Challa, who is the leader of Wakanda — a utopian African nation.

"This might be the blackest 'Black Jeopardy' yet," gameshow host Darnell Hayes, played by Kenan Thompson, announced. This time around the categories included "Grown Ass," "Aw Hell Naw," "Fid'na," "Girl, Bye," "I ain't got it," and "White People."

Boseman's T'Challa, of course, didn't exactly fit in with the other contestants. He struggled to answer questions about paying cable bills, parenting and law enforcement.

Under the category "Fid'na" T'Challa responded to "this is the reason your cable bill is in your grandmama's name" and said, "What is, to honor her as the foundation of the family."

In another attempt, T'Challa answered to "you send your smart-ass child here 'cause she thinks she grown," with the answer "What is, to one of our great free universities, where she can apply her intelligence and perhaps one day become a great scientist."

When asked "the policeman says there’s been some robberies in your neighborhood and asks if you have 'any information,'" Boseman's T'Challa answered with, "What is, not only do I tell this man what I know, but I also assist him in tracking down the offender."

He added, "After all, our ministers of law enforcement are only here to protect us. Is this correct?"

With a scrunched up face Hayes told him, "I mean, it should be!"

"But I don’t think you’ve spent much time here in America," he quipped.

In the end, T'Challa finally understood the game when the topic of a white woman making potato salad came up.

The prompt read, "Your friend Karen wants to bring her potato salad to your cookout." To which Boseman replied, "It is noble she would volunteer to cook for everyone, and although I have never had potato salad, I sense that this white woman does not season her food."

"And if she does," T'Challa continued, "it is only with a tiny bit of salt, and no paprika."

"And she will probably add something unnecessary, like raisins," T'Challa said.

"So, something tells me that I should say, Aw hell naw Karen," T'Challa answered, "keep your bland-ass potato salad to yourself."

Watch the hilarious sketch in full: