We are failing Puerto Rico: Why short-term disaster relief is a disaster

The rapid, reactive approach to disaster relief doesn't work. There is a better way 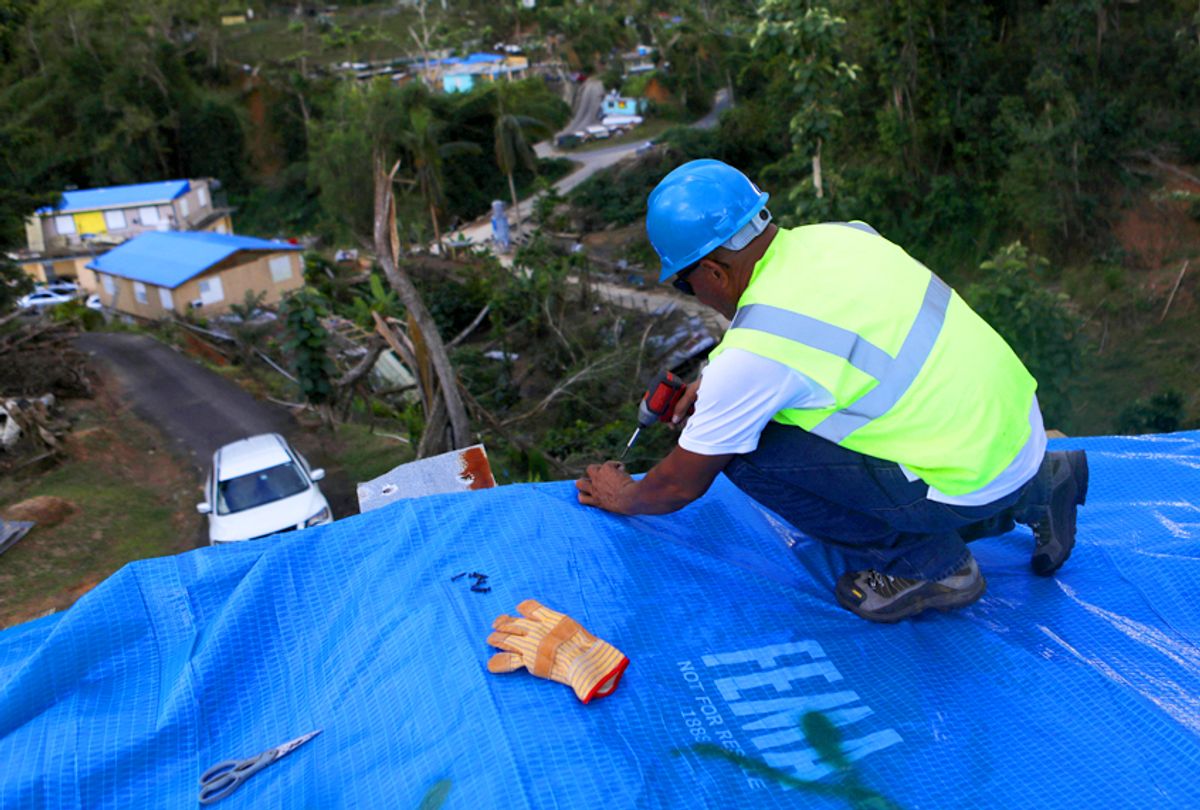 A contractor helps apply a FEMA tarp to a home damaged by Hurricane Maria in Morovis, Puerto Rico. (Getty/Mario Tama)
--

When natural disasters strike, stories of the damage — along with heartbreaking photos and video — dominate news coverage for a week or two. Celebrities tweet to raise awareness. Charities and governments pump in short-term emergency funds.

And then, attention invariably fades. Affected communities suffer in isolation for years after the short-term relief is exhausted. This rinse-and-repeat cycle is failing vulnerable communities.

There's a better way. When disaster occurs, charities and government agencies need to channel funds to deliver long-term infrastructure support, rather than just short-term relief of emergency food, water and tents. Those groups must tailor their aid to the local community to make at-risk areas more resilient to future tragedies.

Consider how the short-term, reactive approach is failing Puerto Rico.

Last year, Hurricanes Irma and Maria demolished Puerto Rico's electric grid and water infrastructure. Six weeks after the back-to-back hurricanes hit, a quarter of the island's 3.5 million residents had no access to safe drinking water. For months after, nearly half of all Puerto Ricans lived without power.

Now, over six months later, thousands of residents are still without electricity.

FEMA, the federal agency responsible for disaster response, was unprepared for the hurricanes. After the disaster, it hastily struck aid delivery deals with incompetent and inexperienced contractors. FEMA inked one contract for 30 million self-heating meals. By the deadline at which 18.5 million of the meals were due, Puerto Ricans had received only 50,000 — none of which were self-heating.

Hurricanes strike the Gulf Coast and U.S. territories in the Caribbean all the time. Why didn't FEMA have vetted, experienced contractors on standby to respond as soon as disaster struck?

Rebuilding homes and infrastructure without proper resiliency strategies in place, only to spend billions more rebuilding when they are destroyed in the next disaster, is wasteful.

For Americans, natural disasters are at least partly predictable — they often recur in similar areas. Five Midwestern states comprise America's "Tornado Alley." About 15 named storms have emerged in the Atlantic every year since 2000. California can expect to suffer several wildfires every summer.

When a disaster does strike, humanitarians should focus on the long term and on making vulnerable communities more resilient. This is where the expertise of architects and urban designers can really make a difference. They can create rebuilding schemes that respond to the needs of local community members — something aid agencies have often struggled with.

Aid groups can look to Chile as a model. In 2010, an earthquake and tsunami crippled the La Poza community of Constitución, Chile.

Corporate donors hired renowned architect Alejandro Aravena to help rebuild. The architect didn't impose his own vision on the project. Instead, he surveyed local residents about what they needed. They noted several priorities — protection of homes from floods, large public spaces, and access to the local river.

Based on a community vote, Aravena designed a forest between residences and the river. The trees would deplete up to 70 percent of the power of any future tsunami. Escape paths through the forest would enable residents to leave quickly if necessary. Plus, the forest served as a public space.

The work of award-winning architect Shigeru Ban in Nepal offers another example. In 2015, an earthquake ravaged the country. Ban developed a multi-part plan for providing both immediate and long-term help to victims.

Ban once noted, "Each disaster is different, so I have to go there to find out the particular problems to solve." He's right. Locally tailored, forward-looking disaster responses are the strategies aid organizations need to adopt.

Farzana Gandhi is an associate professor in the Department of Architecture at New York Institute of Technology. She is a registered architect in New York and a LEED accredited professional.