Rick Scott is running for Senate, setting up a tight race in the biggest swing state 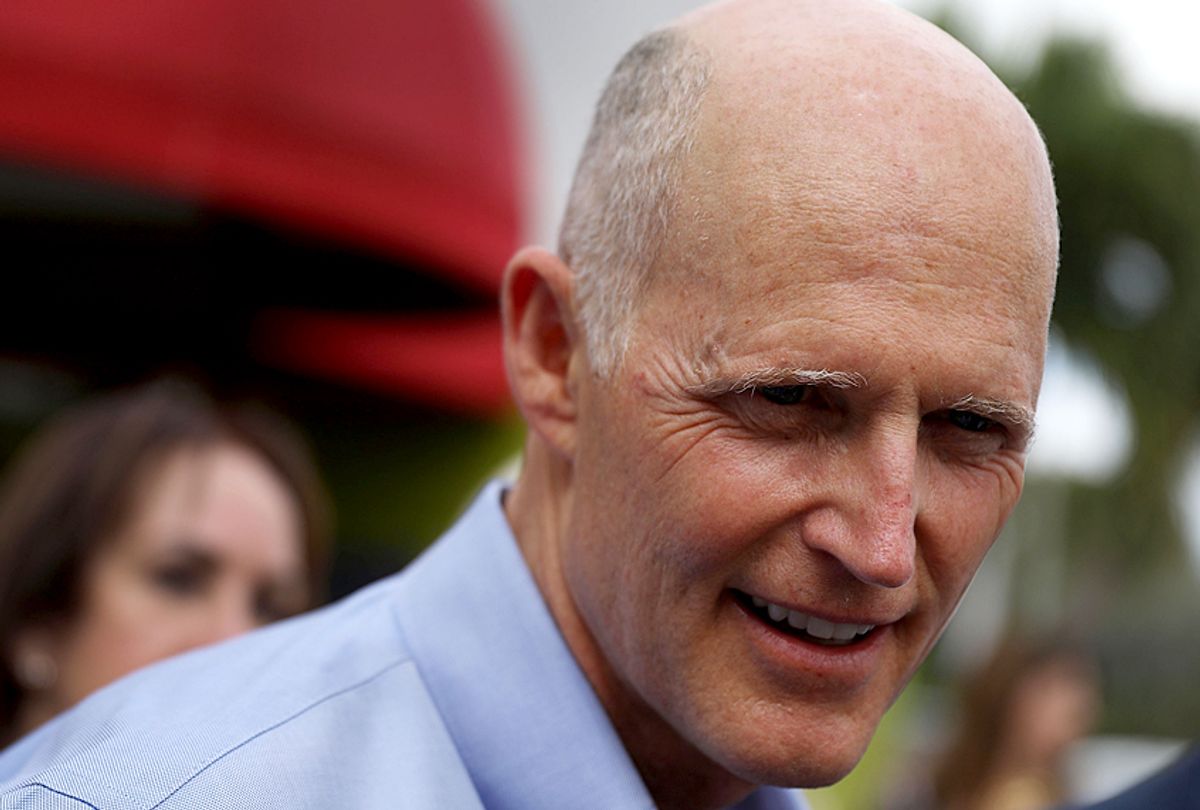 Florida's Republican Governor Rick Scott officially announced his bid for the U.S. Senate on Monday, setting up a face-off in a crucial swing state between a candidate with close ties to President Donald Trump and an incumbent Democrat.

The race could certainly prove itself to be a barometer for candidates who have been strongly supported by the president and whether or not it's a recipe for success. However, Scott has sought to make it apparent that he is his own man, regardless of who supports or doesn't support him.

He continued, "I run on what I believe in. I’ve been very clear. People ask me that a bunch of times, about 'Are you this or are you that?' No. I’m Rick Scott. I grew up poor. I believe in jobs."

Scott is set to challenge Sen. Bill Nelson, the only statewide elected Democrat in Florida, Politico noted. And the election is expected to be one of the most expensive Senate races ever.

After Monday's announcement, the Florida Democratic Party immediately began to push back and painted Scott as someone who only works for his donors.

"For eight years, Rick Scott has put himself and his political interests above the people he serves, and in the Senate he would do the same thing," FDP Chair Terrie Rizzo said in a statement. "Here's his record: lost jobs, low wages and an economy that works for himself and his political donors, not to mention higher healthcare bills, a broken public education system and scandal after scandal."

The statement continued, "There is no limit to Rick Scott's dishonesty and Floridians don't trust him to look out for them in the Senate. Floridians deserve better than Rick Scott."

The FDP also unveiled a digital clock aimed to highlight Scott's unwillingness to disclose his financial assets. "As a candidate for U.S. Senate, Rick Scott can no longer hide behind his so called blind trust, and will have to disclose what's in it, and how he increased his wealth by at least $46 million during his time as governor," a statement from the party read.

However, last year was an uplifting year for Scott, who saw a 7-point net jump in his approval ratings, according to a recent Morning Consult poll. During the fourth quarter of 2017, 58 percent of Florida voters approved of his job, while only 31 percent disapproved. Scott has also done well with independents and even among some Democrats. In the final six months of last year, "his approval numbers among independents also increased, from 47 percent to 53 percent, along with an 8-point gain among Democrats."

Nonetheless, the race is expected to be a tight one, as Nelson has put up promising numbers as well. The sitting three-term senator is on the more popular end of the spectrum when it comes to Senate ratings, with an approval rating of 51 percent, according to Morning Consult.

Democrats with the Senate Majority Super Pac have promised a "six figure" digital advertisement campaign that harps on "how Scott cut K-12 education by $1.3 billion in his first year in office, failed to expand Medicaid under Obamacare and was rocked by a Medicare fraud scandal that happened under Scott’s watch at his former hospital chain, Columbia/HCA, in the 1990s," Politico reported.

Those attacks, however, have failed in past elections against Scott, and his pivot to increase education funding is now something he has touted as an achievement as governor, Politico noted. Scott has also dominated his previous elections by pouring his own funds into them. His 2014 reelection cost more than $100 million, $13 million of which he funded with his own money. As a novice in 2010, he poured $73 million of his own money into his election victory. Democrats will almost certainly be forced to dedicate a copious amount of funds towards the race, just to attempt to hold the seat. The GOP will take less of a hit because of Scott's personal funds.

The silver lining for Democrats? Politico explained how Scott's victoryies may not have been all they were talked up as:

But for all of the talk of Scott’s toughness and his unexpected wins, Democrats point out he has won ugly and has never received 50 percent of the statewide vote, or won by more than 2 percentage-points.

The Democrats also have the ability to tap into Scott's strong relationship with Trump. The president's ratings have struggled a bit in Florida, although it's important to note that there has been an upward trend in those ratings as of late.

Still, it could potentially serve as the party's strongest weapon and also help to drive turnout.

In the wake of the shooting in Parkland, Florida has become a pivotal battleground on the issue of gun control. To some degree, Scott conceded on guns and recently broke with the National Rifle Association and signed a set of modest regulations into law. On the other hand, Nelson was one of the prominent voices that called for sensible gun measures at the CNN town hall in the state, only weeks after the shooting — an event not attended by Scott.

It's still very early, and polls have indicated a close race in which Nelson is shown to have a slight edge. Nelson held a 46-42 percent advantage over Scott in a February Quinnipiac University poll, while a University of North Florida poll from the same month showed a 48-42 percent advantage for Nelson. RealClearPolitics indicated that the average for the race at the moment gives Nelson a marginal lead with 45.8 percent, to Scott's 42 percent.

Meanwhile, polling from the Republican-affiliated Associated Industries of Florida showed an advantage for Scott as wide as 7 points, Politico noted.

The election will be one of the most closely watched in the upcoming November midterms, as Democrats have anticipated a so-called blue wave, with its voters eager to push back against the Trump administration. The president has also sought to make immigration a top priority, which could prove to only hurt conservative lawmakers in swing areas.