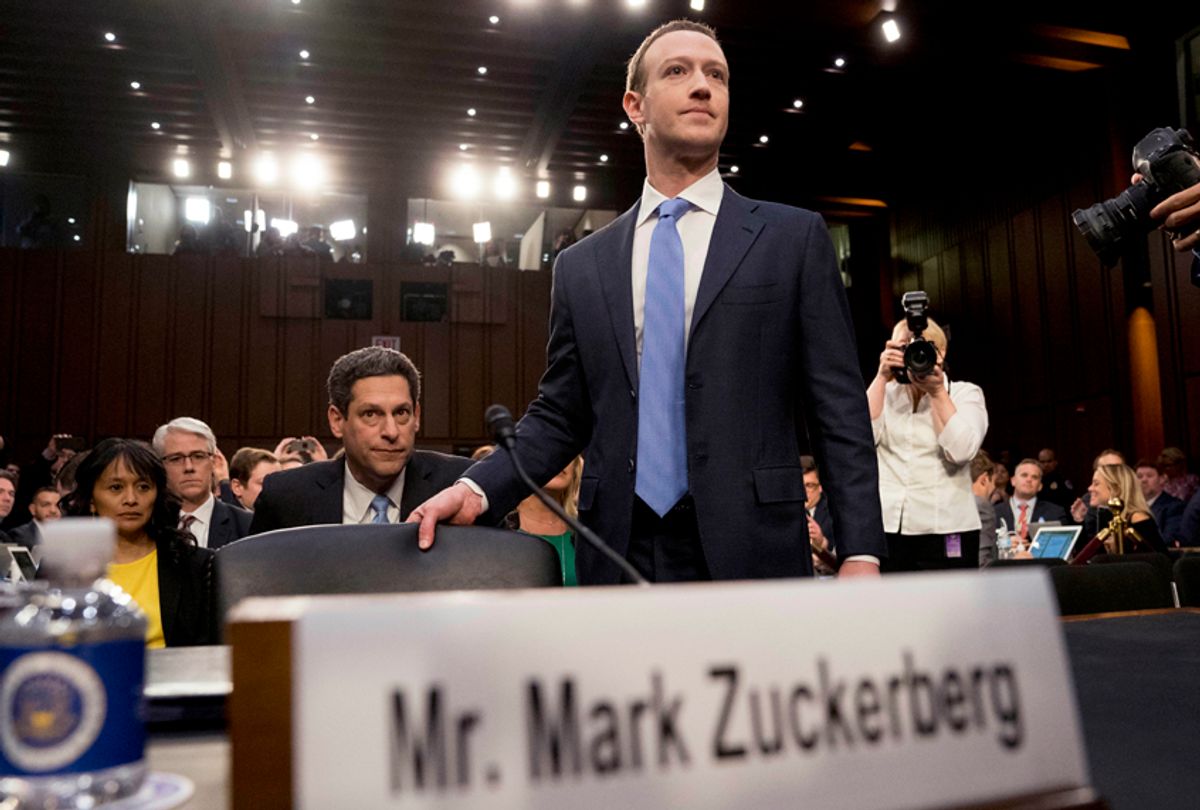 Mark Zuckerberg arrives to testify before a joint hearing of the Commerce and Judiciary Committees on Capitol Hill, April 10, 2018. (AP/Andrew Harnik)
--

Today’s Senate hearing on Capitol Hill was historic for many reasons, one being that the public got a unique opportunity to observe a highly-divided Senate band together to criticize CEO Mark Zuckerberg and his social media empire, Facebook — which has ironically been blamed for increasing partisanship and balkanizing the country.

An estimated 44 senators gathered together in a joint session before two Senate panels, the Commerce and Judiciary committees, a rare show for Congress. Their primary topic of discussion was the effects of data analytics firm Cambridge Analytica pilfering the personal data from 87 million Facebook users — yet each Senator had their own agenda when it came time to fling questions at Zuckerberg.

Together, Republican and Democratic Senators demanded details on how Facebook collects its users' data, and improvements on how to prevent it from happening again in the future.

"I’m not convinced that Facebook’s users have the information they need to make meaningful choices," Senate Commerce Chairman John Thune, R-S.D, said. "In the past, many of my colleagues on both sides of the aisle have been willing to defer to tech companies’ efforts to regulate themselves. But this may be changing."

“If Facebook and other online companies will not or cannot fix these privacy invasions, then we will,” Sen. Bill Nelson, D-Fla., warned.

From Kamala Harris to Orrin Hatch, each senator had their five minutes to grill Zuckerberg on Tuesday.

Here are some of the more memorable moments from today's five-hour hearing:

First and foremost, Zuckerberg repeatedly apologized for the scandal that led him to testifying in front of Congress in the first place. Zuckerberg's opening remarks were boilerplate: “Facebook is an idealistic and optimistic company and for most of our existence we focused on all of the good that connecting people can do,” he told a joint hearing of the Senate Commerce and Judiciary committees. "But it's clear now that we didn't do enough to prevent these tools from being used for harm as well."

Zuckerberg would continue to apologize and take responsibility for the mess, but this seemed to only further incense the pack of Senators, who— in their own words — were looking for solutions, not apologies.

Sen. Lindsey Graham, R-S.C., asked Zuckerberg:“Who’s your biggest competitor?” Zuckerberg couldn’t provide him with a direct answer, and instead began to explain that Google, Apple, Amazon, and Microsoft are “overlapping” with Facebook.

“I’m not talking about categories. I’m talking about real competition you face. ‘Cause car companies face a lot of competition. They make a defective car, it gets out in the world, people stop buying that car, they buy another one. Is there an alternative to Facebook in the private sector?”

Zuckerberg says: “There will always be a free version of Facebook”

In an eyebrow-raising moment, Zuckerberg assured Senators that there will always be a “free” version of Facebook. This happened during Senator Orrin Hatch's (R-Utah) round of questioning.

“You said back then that Facebook would always be free,” Hatch said to Zuckerberg, referring to a 2010 meeting as part of the Senate Republican High Tech Task Force. “Is that still your objective?”

“Senator, yes,” Zuckerberg replied. “There will always be a version of Facebook that is free. It is our mission to try to help connect everyone around the world and bring the world closer together. In order to do that, we believe we need to deliver a service that everyone can afford.”

Some are speculating that a paid version of Facebook could be in the works.

During the hearing, it was revealed that Facebook didn’t notify the Federal Trade Commission (FTC) after learning about the Cambridge Analytica data leak in 2015. Instead, Facebook executives reportedly trusted that Cambridge Analytica had deleted the data as the company had requested.

"We considered it a closed case. In retrospect that was clearly a mistake. We shouldn't have taken their word for it," Zuckerberg said.

This is eyebrow-raising because Facebook signed a consent decree with the FTC in 2011 which said that Facebook would notify users is their data was shared beyond specified privacy settings.

“There are a great many Americans who I think are deeply concerned that Facebook and other tech companies are engaged in a pervasive pattern of bias and political censorship,” Cruz said.

Cruz then asked if Facebook is a “neutral public forum?”

Zuckerberg said that Facebook is a platform for all ideas. Cruz asked Zuckerberg about the political ideologies of his employees, and asked why Palmer Lucky was fired; an employee who was alleged to have backed a pro-Donald Trump organization. Zuckerberg said he wasn’t fired because of his political beliefs.

Zuckerberg concluded that political biases in the company are a “fair concern,” but explained that Silicon Valley is traditionally left-leaning and progressive.

Democratic Sen. Kamala Harris of California started her questioning by saying she was “concerned.” Indeed, she gave Zuckerberg a tougher round of questioning than her predecessors. First, she recalled all of the questions she’s noted that Zuckerberg couldn’t answer, including not being able to name a competitor.

Harris then asked who made the decision in 2015 to not tell users that there had been a data breach.

“Did anyone at Facebook have a conversation at the time you became aware of this breach, a conversation where in which the decision was made not to contact the users?” Harris asked.

“In retrospect, that was a mistake,” Zuckerberg responded.

Harris then ran out of time.

“Here is what everyone is trying to tell you today: ‘Your user agreement sucks,’” Kennedy said. “The purpose of the user agreement is to cover Facebook’s rear-end.”

Sen. Chuck Grassley says Congress gets along better than the public may think

In his concluding remarks, Sen. Chuck Grassley, R-Iowa, rambled about media bias and called on Zuckerberg to help combat public cynicism for government.

“I hope that everyone will do whatever they can to help increase respect for government,” Grassley told Zuckerberg.

He also said that Congress gets along better than what the media depicts.

Tomorrow Zuckerberg will testify again — this time, before the House of Representatives.