The perfect parental dread of "A Quiet Place"

The horror movie that asks the parents in the audience, "Who are we if we can't protect them?" 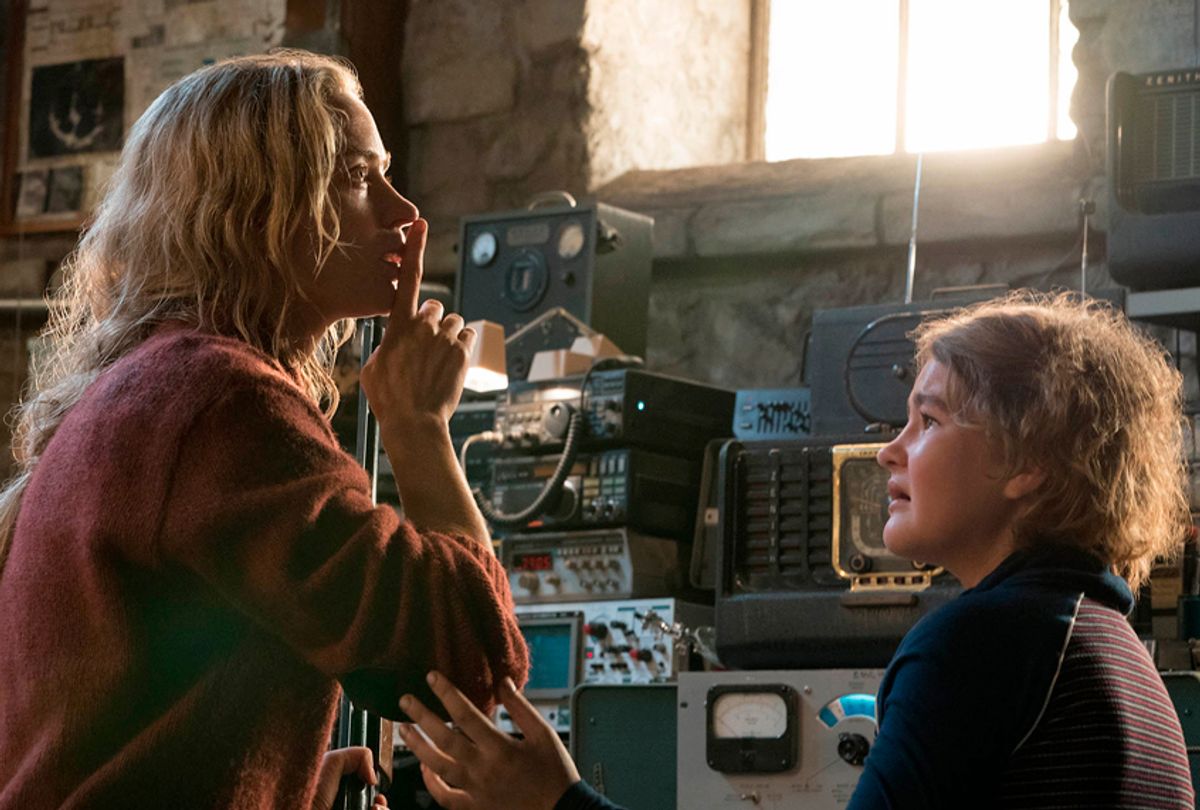 WARNING: MAJOR SPOILERS AHEAD FOR "A QUIET PLACE"

When I was pregnant with my first child, a neighbor with three kids of his own offered me the most reassuring and terrifying wisdom I've ever heard on the subject of parenting. "You worry so much about them," he said. "You worry about what's going to happen when they're out of your sight. But honestly, all the worst things have happened right in front of my eyes, when I was a few feet away." Eighteen years later, it's why I can't get "A Quiet Place" out of my head.

Director and co-writer John Krasinski's sleeper horror hit takes place on a near future earth that has been invaded by hostile aliens who hunt their human (and raccoon) prey via sound. Most of the population has perished, but the Abbott family — parents Lee (Krasinski) and Evelyn (Emily Blunt), their deaf daughter Regan (Millicent Simmonds) and sons Marcus and Beau have managed to survive, relying on sign language and improvised soundproofing. In the first few minutes of the film, the family goes into their abandoned town for supplies, and Beau becomes enamored of a mechanical rocket. A few minutes later, en route home, the toy begins whizzing and the child is snatched by a creature, as his horrified family watches helplessly.

The rest of the film unfolds a year later, as the Abbots continue to eke out their existence in the aftermath of grief and the anticipation of Evelyn's new baby. The emotional power of "A Quiet Place" rests in how it gives each character scenes that depict the aftermath of tragedy and the psychic toll of ongoing stress. Regan has made a makeshift memorial to her brother on the spot where he was taken; Beau is afraid to leave the property; Lee claims not to blame his daughter for her part in Beau's death, but his distance from her comes through nonetheless. And Evelyn, methodically preparing for another child while sobbing silently for the one she's lost, is a jumble of strength and self-recrimination.

"I could have carried him," she tells Lee late in the film. She's running through the scene again in her head, chiding herself because her hands were free when they were walking home that day. If only he'd been in her arms, he'd have been safe, she thinks. Lee reassures her it's not her fault, but Evelyn is exhausted and broken. "Who are we," she asks, "if we can't protect them?" She then makes him vow he will always protect them — a vow they've both clearly been making good on with every act of their waking lives.

The film's wide appeal certainly owes a large debt to its popcorn consumption inhibiting use of silence, punctuated with meticulously deployed morsels of sound. But it's also impossible to imagine "A Quiet Place" being nearly as effective without the considerable credibility of real-life husband and wife — and parents of two — and Krasinski and Blunt.

Not all real-life couples have on-screen chemistry, but the film's leads never stop looking at each other with a completely believable "I would be killed by a giant bug with a thousand teeth for you" energy. Whether sharing a consoling dance and pair of ear buds or confronting the excruciating possibility of losing one another, they're bound up in their pain, their failures and their determination.

But the film's greatest kick in the gut is, that like other claustrophobic horrors including, "The Ring" and "Don't Breathe," the terror is ratcheted up by a narrow imperative. Can you figure out the rules and play by them to live? It's a device as old as the tale of Medusa, and it works because it feeds our primal fear that our catastrophes are our own mistakes, and our survival is a testament to our ingenuity. It's a brain game that magnifies exponentially when you become a parent. Because who are we, if we can't protect them?

The instinct for self-preservation suddenly seems laughably insignificant the day you meet your instinct to keep your kids safe. Any halfway decent parent surrenders a significant portion of their brain power and physical energy toward doing their best for their kids from the moment that stick gets peed on. We put them on their backs to sleep when they're infants. Move the cleaning supplies to a high cabinet. Take them to the doctor when they're sick. Volunteer at their schools. Hold them close when they cry. Check in on them when they're out with their friends. Don't let them play with toy rockets that will get them eaten. It seems like a tidy deal with the universe. And yet and yet and yet. They tumble off the swings. They get fevers that terrify us. They get mental health issues that terrify us. They get bullied by classmates. We want to believe that if we just do everything right, the wheels will never fall off. Wheels sometimes fall off anyway.

Speaking with The Daily Californian this week, Krasinski acknowledged the film's family-centric sense of dread. "We just had our second daughter about three weeks before I read the script," he said. "And so I was already in the state of terror of keeping this girl safe . . . and whether or not I was a good enough father. [And then] in comes this script about a family that relies on each other, about parents that would do absolutely anything for their kids. So it doesn’t take a lot for me to cry, but I was wide open for this one, and it connected to me in a big way."

I have replayed the scenes of my children's scariest moments over and over in my mind thousands of times. It's not difficult, because just as my neighbor predicted so long ago, most of them happened right in front of me. I try to rewrite the falls and the illnesses and the outbursts, so that this time I do something differently and the disasters are averted. Then I remember how things really happened, and I feel all that sadness all over again, weighted with all that guilt. By the way, I'm a really good mom. I know that. My kids know that. But whether I'm standing there next to them or not, they still get hurt.

Near the end of "A Quiet Place," Lee does protect his children, by sacrificing his own life. But both he and Evelyn have already also protected them in the most significant ways possible. In a shattered world, they've still given them math lessons and board games. They've taught them how to scavenge for medicine and fish for dinner. They've loved them and encouraged them. They've given them — as Evelyn learns in the nick of time — the ingenuity to fight off the monsters, the ability to interpret the thing that makes them vulnerable as the thing that gives them strength. And if the horror story of parenting is learning the myriad ways we can't protect them, the joy of it is in discovering, one day, that they've become pretty great at taking care of themselves.