Trump's troops on the border: It's bad political theater — and nothing to do with security

Militarizing the border is pure propaganda, fueled by Fox News paranoia. It does nothing for real public safety 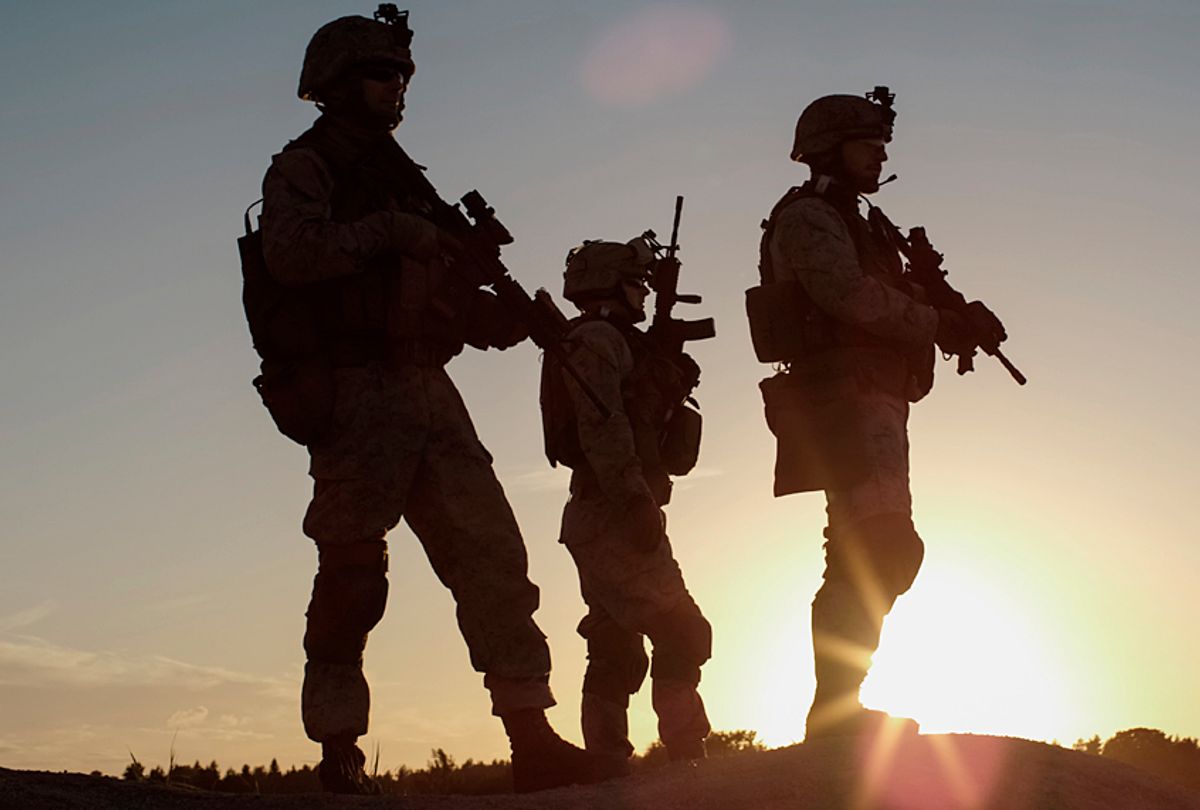 Last week, the Fox News-addled grandpa who is legally the president of the United States got riled up, as he is wont to do, by his favorite channel's racist propaganda. "Fox & Friends" depicted a caravan of refugees from Central America as an invading army, rather than a group of people fleeing violence and seeking peaceful lives. Donald Trump went bonkers on Twitter and then backed up that tantrum on Tuesday, unfortunately, by telling reporters that he intended to use troops to "secure" the border.

Sometimes Trump's White House staff waits out these ridiculous fits, slow-rolling any action on the president's impulsive decisions in hopes that he'll soon be distracted by the next shiny object dangled in front of him. But Trump has surrounded himself with people nearly as motivated by racist impulses as he is, so it's really no surprise to see his administration snap into action, ready to yank thousands of National Guard members out of their ordinary lives on a whim and move them to the border for no reason.

Well, no legitimate reason anyway. As historians who have studied the history of militarizing the southern border explained to Salon, while heavy security and a military presence on the border does little to keep Americans safe, such security-state theatrics can be extremely effective as racist propaganda.

“Having more enforcement on the border, a lot of it is just political theater," explained Timothy Dunn, a professor of sociology at Salisbury University and the author of "Blockading the Border and Human Rights: The El Paso Operation that Remade Immigration Enforcement."

"A lot of it’s done for the benefit of audiences elsewhere," Dunn added, suggesting that the primary purpose is to allow Trump and other anti-immigrant politicians to "look tough."

Levario argued that the presence of troops and heavy security on the border plants the idea in people's heads that immigrants present a threat to public safety, even without any actual evidence.

"Why else would you mobilize the Texas Rangers, the National Guard, the U.S. Army?" he said. "To protect somebody. To protect people from an enemy.

"In this case, the perceived enemy is Latino," he continued. “It’s a guilty-before-innocent approach. It further vilifies people of Mexican descent or Latinos in general.”

Trump hasn't really bothered to hide the fact that the value of troops on the border is mainly propagandistic. "Until we can have a wall and proper security, we're going to be guarding our border with the military," Trump said on Tuesday, after taking heat from Ann Coulter and other far-right figures about his inability to secure funding to build the border wall he promised during his presidential campaign.

Putting troops on the border helps create the illusion of a threat, which in turn helps build the case for the wall. But the reality is that there is no threat, and even if there were, the National Guard would be fairly useless against it.

For one thing, the number of people crossing the border illegally is at its lowest rate since 1971. The reasons for this have little to nothing to do with border enforcement but are the result of cultural and economic shifts in both the United States and Mexico. For one thing, the Mexican birth rate has been falling for decades, and the labor surplus that country used to have has largely evaporated. The Great Recession dramatically reduced demand for immigrant labor on this side of the border as well, and a fair number of Mexicans who moved to the U.S. for economic reasons have returned to Mexico. Even if unlawful immigration is viewed as a significant concern — and even that statement is controversial, since undocumented immigrants are a critical part of the U.S. labor force and culture — beefing up border enforcement makes no sense.

The other issue is that the National Guard is not well suited for border security. They can offer some material assistance to the Border Patrol but have no authority to directly enforce the law.

To be clear, the use of military and militarized law enforcement, such as Border Patrol, for propaganda purposes is not new. Levario argued that it's really a century-long debacle. The military response to some of Pancho Villa's incursions during the Mexican Revolution could perhaps be justified, but since then, Levario argued, there's been no real threat to the U.S. from the Mexican side. Yet for the past 100 years, presidents of both parties have frequently escalated security, more as a posture than as a legitimate response to any actual danger.

Ironically, the continued escalation of border security, both in the form of Border Patrol agents and the occasional use of troops, has evidently contributed to the growth of the undocumented population. According to 2016 research by Princeton sociologist Douglas Massey, long-standing patterns of migration and immigration have changed. In the past, people often crossed the border into the U.S. for temporary work, but would then return to Mexico and other countries. That changed, starting in the '80s, along with a drastic increase in border security.

Both Barack Obama and George W. Bush sent troops to the border for propaganda purposes. Obama sent 1,200 National Guard troops in 2010 in an effort to convince Republicans he was serious about enforcing border security, in hopes of convincing them to pass an immigration reform bill. (That effort failed.) Bush did the same thing for the same reason in 2006, with 6,000 troops, to the same effect.

While the reasons for sending troops to the border are largely symbolic, the effects of doing so can be quite damaging. For one thing, the presence of troops can force migrants to take greater risks to cross, often paying smugglers and facing abuse during their journey. It forces people away from safe crossing in urban centers and into the dangerous open desert, where they may die of exposure. From 1998 to 2017, Border Patrol agents have found the remains of 7,216 people who likely died that way.

It also impacts the people who live in the area who are subject to this racialized security theater. I grew up along the border in Texas and can personally attest that Border Patrol checkpoints everywhere cause real psychic damage: People can be subject to random searches just because they decided to drive from one town to another. And I'm white. For people of color I grew up with, it seemed particularly stressful to be forced into interaction with aggressive law enforcement, trained to find people who "look like" immigrants.

We can hope this escalation of racist rhetoric under Trump will cause politicians, especially Democrats, to rethink the issue of border security and realize that this kind of surveillance state is not justified just because people choose to live along the border. Instead of constantly adding Border Patrol agents and further militarizing the border, it's time to shut down those checkpoints and drastically shrink the size of the agency. The only thing accomplished by more troops on the border is to further alienate Latinos living in the U.S. and increase racial tensions in the Southwest. Which may well be the point, after all.