Republicans accuse Oklahoma teachers of being selfish. But these walkouts are about the value of education 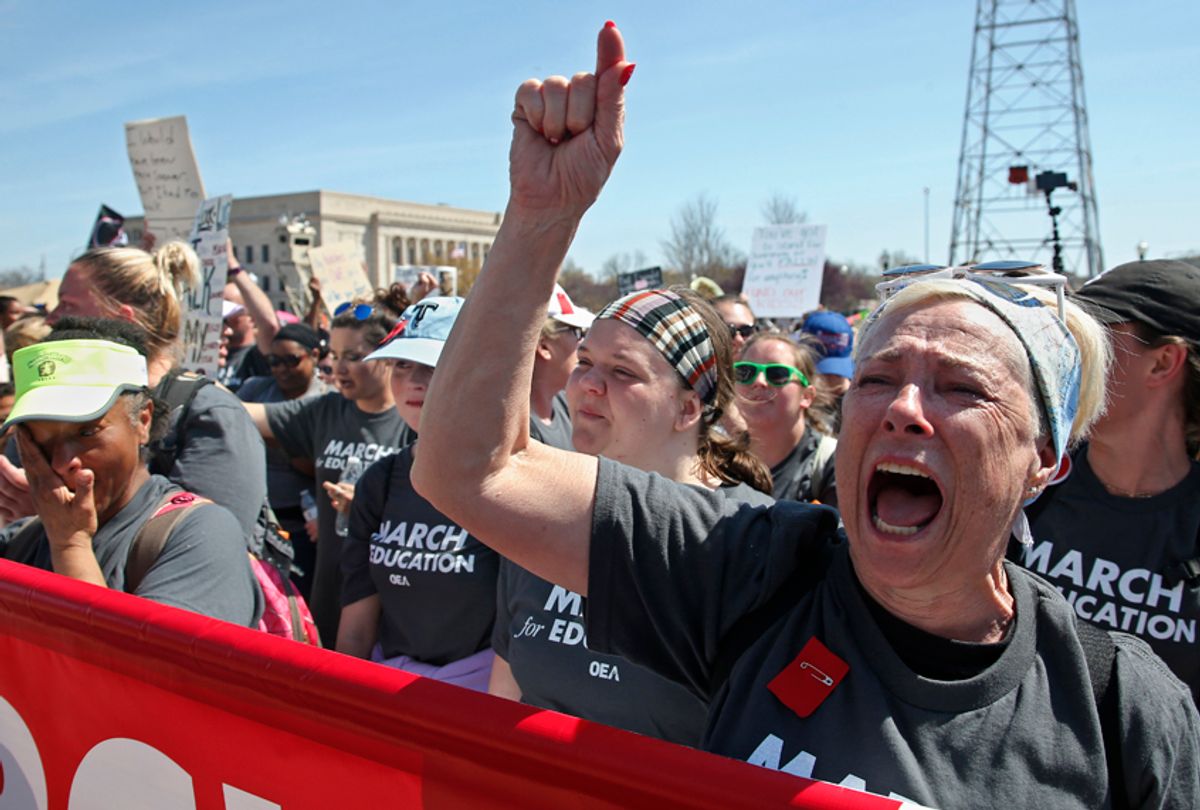 Teachers are holding massive walkouts in Oklahoma and threatening to do so in Kentucky, right on the heels of a similar labor protest movement in West Virginia. Educators are fed up in many red states that slashed taxes and budgets following the Great Recession and failed to raise new revenues in response to the economic recovery. Republicans, unsurprisingly, oppose this surge of worker activism and have landed on a familiar strategy and talking point: Pitting striking teachers against their students.

“I think about the kids,” Education Secretary Betsy DeVos told the Dallas Morning News when asked about the Oklahoma walkout. "I think we need to stay focused on what’s right for kids. And I hope that adults would keep adult disagreements and disputes in a separate place, and serve the students that are there to be served."

Kentucky Gov. Matt Bevin, a Republican, tried a similar tactic, suggesting that real teachers "want to teach their children" and that the teachers union was somehow opposed to that goal.

Oklahoma Gov. Mary Fallin, another Republican, has characterized the teachers as greedy and childish, saying their behavior is like that of "a teenager wanting a better car."

“That’s a very classic talking point," said Jon Shelton, a professor at the University of Wisconsin-Green Bay and the author of "Teacher Strike! Public Education and the Making of a New American Political Order." “That’s wrong, of course. Teachers by and large go into it because it’s a calling. They do this because they care about kids and want what’s best for them.”

"Kids don’t benefit from teachers who are overworked and tired because they have to work multiple jobs to make ends meet," said Joseph Slater, a professor at University of Toledo College of Law who specializes in labor law. "Nor do kids benefit from good teachers leaving their school district, their state or the teaching profession altogether because of poor wages, hours and conditions."

Accusing the teachers of neglecting the students is a particularly hard sell when it comes to the Oklahoma walkouts. The state has already offered the teachers a $6,000-a-year raise, and while that falls short of the $10,000 the teachers are asking for, it's likely that teachers would settle at that price if all they wanted was fatter paychecks. But the Oklahoma protests have continued into their second week because the teachers want more — for their students. Specifically, teachers are demanding $200 million to restore education funding that's been cut.

David DuVall, executive director of the Oklahoma Education Association, explained to The Oklahoman that "class size limits, librarians, those kinds of things, still exist in law, but there is a moratorium on those being required because of a lack of funding."

"But with additional funding, that moratorium would come off and we can restore those vital positions to our schools," he added.

Despite efforts from Republican politicians to confuse the issue, the Oklahoma teachers have made clear that these protests are meant to benefit students as much as teachers. Textbooks are battered and falling apart, and are often decades old. Teachers claim they haven't been able to turn on lights in hallways and have been forced to keep classroom thermostats at 57 degrees, forcing kids to wear coats to school.

In some districts, class time has been cut back to four days a week to save money. DeVos claims to want kids back in school but seems completely uninterested in this particular problem, which could be solved by increasing education budgets.

It's no surprise that so much of what teachers are demanding is for the students, Shelton explained. “The reality is the conditions under which teachers teach are the same under which students learn," he said. "Teacher unionization has, by far, been a net benefit to schools in this country.”

For decades, teacher organizing has led to increases in education spending, smaller classroom sizes and less teacher turnover. In 2011, Wisconsin passed Act 10, a law designed to undermine the collective bargaining rights of teachers. Subsequent research from David Madland and Alex Rowell of the Center for American Progress demonstrated that the change in law led to an immediate decline in teacher quality in the state, as more teachers quit their jobs and the pool of teachers became much less experienced overall.

Gender likely plays a major role in how undervalued public school teachers are. The latest statistics show that 76 percent of teachers are women, and when women "do things collectively to get a better deal for themselves, they’re seen as acting selfishly," Shelton argued, noting that the gender of the strikers likely contributes to their "infantilization" by politicians.

"If police officers or firefighters were asking for something similar, there’s no way they would be called spoiled teenagers," he added.

Evidence for this comes from Wisconsin, where police and fire departments — male-dominated agencies — were exempted from Act 10 restrictions on collective bargaining rights, while public employees in more female-dominated sectors, especially teachers, were not. In Ohio, legislators pushed a law that would have curtailed labor organizing rights for all government workers, including police and firefighters, and that effort eventually failed. The contrast between these Midwestern states suggests that male-dominated professions are seen as untouchable while women are expected to get by on less.