As more states plan to put legalization on the ballot in 2018, will hard-line conservatives follow his lead? 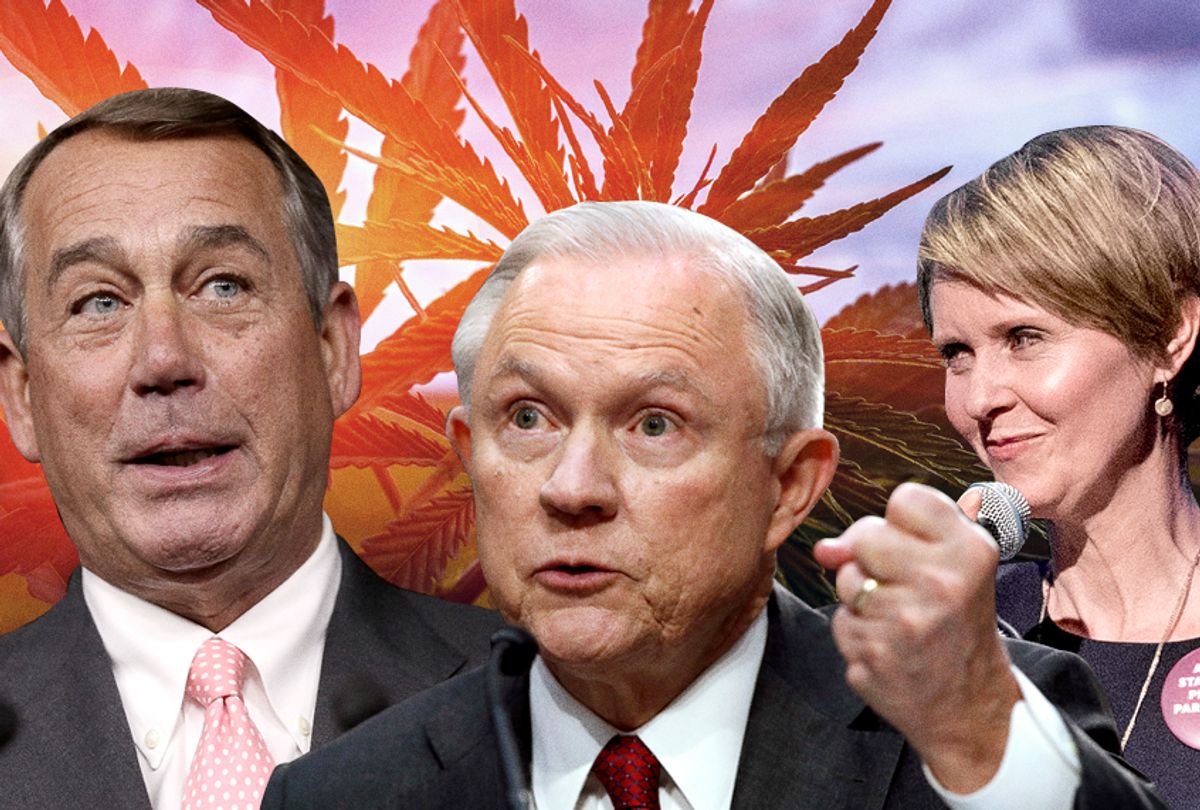 Momentum in the movement to legalize marijuana has stalled under the Trump administration. Indeed, the administration's ultraconservative views on crime and drugs don't bode well for the campaign to legalize a Schedule 1 drug, the same legal echelon as heroin by the rules of the U.S. Drug Enforcement Administration.

Yet a shift in tide may be on the way, partly thanks to former Speaker of the House John Boehner, who in 2011 said he was  “unalterably opposed” to the drug’s legalization.

Flash forward to 2018, and he’s had a change of heart. Boehner, along with former Massachusetts governor Bill Weld, have been appointed to the Board of Advisors at Acreage Holdings, a multi-state cannabis business that aims to "make cannabis available to any patient who can benefit from safe and reliable access."

Acreage Founder and CEO Kevin Murphy told Salon the organization connected with Boehner through mutual friends. Boehner began to have a shift in perspective when he started to learn about the medical successes patients had had with marijuana.

“I asked him if he wanted to participate with us here at Acreage and he graciously accepted and I couldn’t be more thrilled,” Murphy said. “John and Bill and very compassionate men; they want to help others. People have their different views of politicians, but these are two men who care about their constituents. They are real people who want to make a difference.”

In a joint statement with Weld, the two said, “While we come at this issue from different perspectives and track records, we both believe the time has come for serious consideration of a shift in federal marijuana policy.”

Boehner echoed his sentiments on Twitter on Wednesday, officially, citing that his “thinking” on the issue has “evolved.”

“I’m convinced de-scheduling the drug is needed so we can do research, help our veterans, and reverse the opioid epidemic ravaging our communities,” he wrote on Twitter.

Not all responses on Twitter were positive. Some people on Twitter were quick to criticize, others were surprised, and some — presumably from his own party — alluded to a sense of betrayal. Indeed, Boehner voted against legalizing marijuana in Washington D.C. when it was on the ballot in 1999.

“Was it a surprise to me? No, because it was a surprise to me that I would be engaged in this business as well. The fact of the matter is if you asked me 10 to 15 years ago what I think of cannabis, I’d say not much,” he said. “People are entitled to grow and change their mind, that is why you see change in social buy-in.”

Recent polls show that Boehner isn’t the only one to change his mind on the traditionally politically polarized topic. In January 2018, Pew Research Center published a report on the increasing support for the legalization of marijuana among the American public; six-in-ten Americans said yes, the use of marijuana should be legalized. The study capped off a slow, but steady upward trend that’s been on happening over the last decade; 18 years ago, in 2000, only 31 percent of Americans thought weed should be legalized, according to Pew Research Center.

Indeed, the issue is more popular with those of a certain age than others. In the same 2018 study, 70 percent of Millennials declared support for marijuana legalization; 66 percent were Gen Xers, and 56 percent were Baby Boomers. A Gallup Poll from October 2017 had similar findings.

While Boehner is relatively late to the pro-legalization game, some political candidates — including the actress Cynthia Nixon — have made marijuana legalization a top priority in their campaigns. Nixon, who is running for governor of New York state, told the New York Times that the legalization of marijuana is a “moneymaker” and a “justice issue.”

“We have people, particularly African-American men, sitting in jail for something that white people do with impunity,” she told The Times.

Nixon said “one-hundred percent” it should be legalized in New York State.

Of course, marijuana has one powerful stalwart opponent who holds a great deal of sway in Washington: Jeff Sessions. Attorney General Sessions has vehemently disapproved of the movement and rescinded memos, issued by the Obama administration, that protected states that have legalized marijuana. For Sessions, marijuana constitutes a moral hazard that precludes him from supporting the drug’s legalization. “Good people don’t smoke marijuana,” he once said. He also sent a letter to the governor and attorney general of Washington State, saying that Congress had “determined that marijuana is a dangerous drug and that the illegal distribution and sale of marijuana is a crime.” Sessions has also claimed that the legalization of marijuana is linked to violent crime.

Yet researchers have found that there has been a decrease in drug-trafficking-related crimes in states bordering Mexico that have introduced medical marijuana laws. The IZA Institute of Labor Economics published a paper on crime and the legalization of marijuana that suggested there were links between Washington’s legalization of the drug and a decline in crime rates of rape, robbery and burglary.

California's proposition 64, which legalized recreational marijuana, has also cut penalties for many marijuana-related offenses, and anyone who is currently incarcerated, on probation, on parole, or under community supervision can petition to have a sentence reduced or a charge reduced to a misdemeanor.

As more states are expected to put the issue on the 2018 ballot, one wonders if hard-line opponents will be more likely to follow Boehner’s lead. Could Boehner be blazing a trail?

Those in the cannabis industry hope so.

“It is encouraging to see the conservatives in the Republican party coming around to appreciate the value cannabis has in supporting overall health and driving economic activity in communities nationwide," Tim McGraw, CEO of Canna-Hub, a cannabis real estate portfolio in California, told Salon. "Boehner's involvement with a cannabis advisory firm is further evidence that both sides of the aisle are coming together to agree with the more than 75 percent of Americans who oppose prohibition."