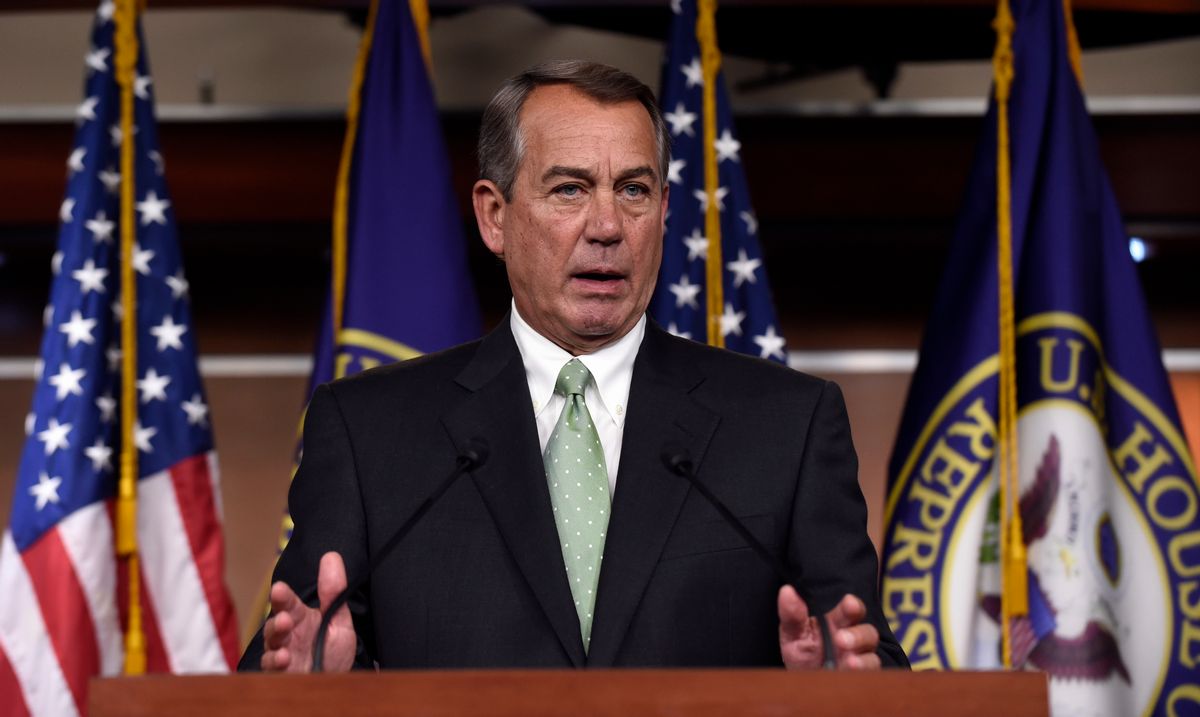 Well, this is going to be super awkward.

President Donald Trump tried to court North Dakota's Democratic senator, Heidi Heitkamp, and wanted her to switch parties before he even took office. Per the Washington Post:

“When I visited with him in Trump Tower before he was sworn in, he asked me to switch parties,” Sen. Heidi Heitkamp (D-N.D.) said Tuesday, responding to questions in an interview with The Washington Post.

“He says, ‘You should switch parties,’ ” Heitkamp said, when questioned by The Post about whether Trump courted her to switch parties. She responded with an ask of her own.

“I said, ‘You should give me an Ex-Im bank,’ ” the senator said, with a chuckle. It was a reference to the Export-Import Bank, an agency she was pushing to make fully operational.

When former House Speaker John Boehner announced his retirement from elected office in 2015, the Ohio Republican framed it as time to relax with some red wine. But who knew that marijuana would be part of the mix?

Boehner said Wednesday that he would be joining Acreage Holdings, which describes itself as "one of the nation's largest, multi-state actively managed cannabis corporations."

Boehner would be joining Bill Weld, the former Massachusetts governor, as an adviser on the company's board.

While we come at this issue from different perspectives and track records, we both believe the time has come for serious consideration of a shift in federal marijuana policy. Over the past 20 years a growing number of states have experimented with their right to offer cannabis programs under the protection of the 10th amendment. During that period, those rights have lived somewhat in a state of conflict with federal policy. Also, during this period, the public perception of cannabis has dramatically shifted, with 94% of Americans currently in favor of some type of access, a shift driven by increased awareness of marijuana’s many medical applications.

Here's what Mick Mulvaney wants to spend money on

Head of the Consumer Financial Protection Bureau Mick Mulvaney didn't request money for his agency, saying that he wanted to be "responsible stewards" of taxpayer dollars.

And here's how he's spending the money:

Documents obtained by The Associated Press show the Consumer Financial Protection Bureau has spent more than $5,000 frosting the windows on the offices of senior staff in recent months.

The money spent on window frosting comes only months after the CFPB moved into renovated offices at a cost of more than $240 million.

CFPB receipts show the bureau ordered window frosting film twice, once in September 2017 and again in early February. The frosting film has been used on the offices of the top political staffers as well as conference rooms, according to a person familiar with the matter. This person requested anonymity because they weren’t authorized to speak on the record.

President Donald Trump chose Christopher Wray to lead the FBI. He can also fire the FBI director, as he showed last year by firing James Comey. So that makes Devin Nunes' suggestion that the GOP has a plan to impeach Wray all the more interesting.

.@DevinNunes: "We will have a plan to hold in contempt and to impeach." @IngrahamAngle: "To impeach Christopher Wray?"@DevinNunes: "Absolutely." pic.twitter.com/AxB0KGkHBO

Here's a hint of what Sinclair said to its employees, which HuffPost got a hold of.

I know that for many of you, this past week has been challenging as the stations bore the brunt of politically motivated attacks regarding our news promotions. As you know, the practice of on-air personalities following a script is not unique to Sinclair, however, the blowback we received for doing so certainly is. For having to field nasty calls, threats, personal confrontations and trolling on social media, I am truly sorry you had to endure such an experience. However, as an organization it is important that we do not let extremists on any side of the political fence bully us because they do not like what they hear or see.

A bad realization about the Republican tax bill

This could have been helpful before the GOP passed it.

Corker on price of tax cut according to CBO: “If it ends up costing what you said here, it could well be one of the worst votes I ever cast.”

Slipped Through The Cracks