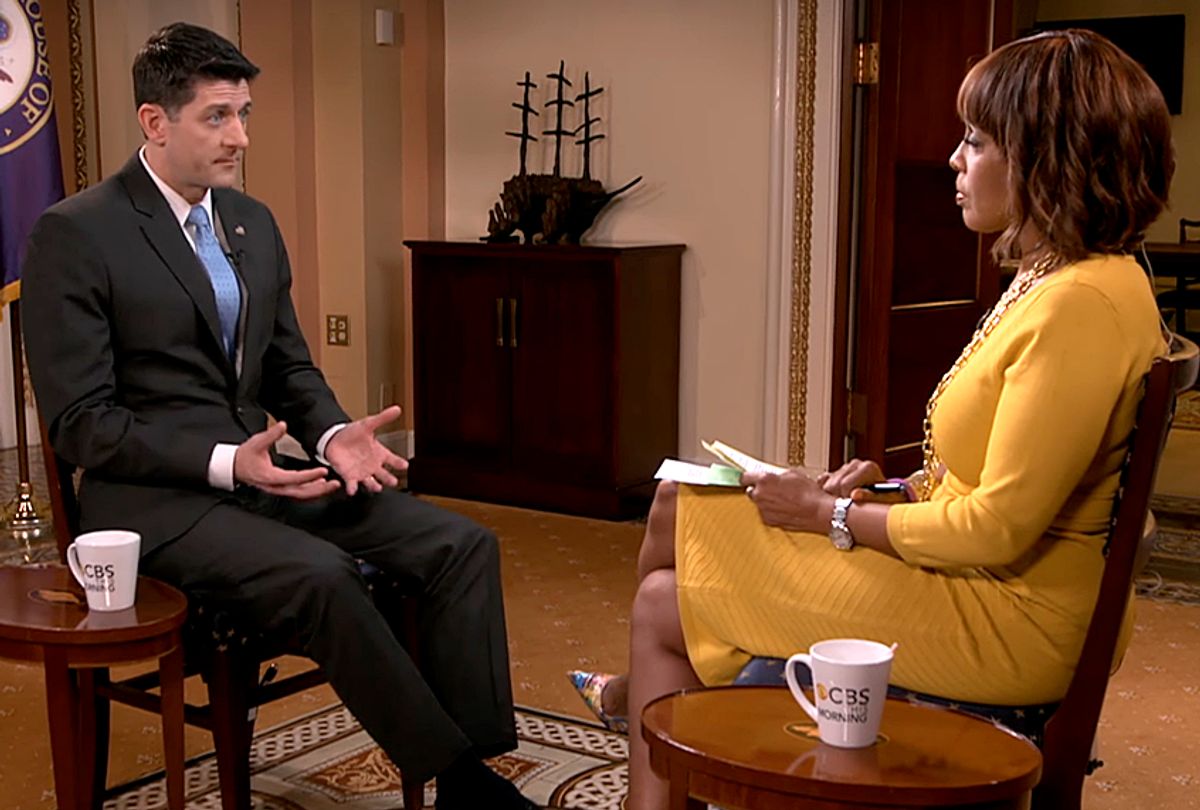 House Speaker Paul Ryan sat down with CBS This Morning co-host Gayle King one day after news broke that Ryan will be stepping down from Congress. During their interview, King didn’t hesitate to call out the Trump administration for the remarkably homogenous demographics of its leadership.

Specifically, King asked about a photo that Trump tweeted on Tuesday night.

“Honored to have Republican Congressional Leadership join me at the @WhiteHouse this evening,” he said in his tweet. “Lots to discuss as we continue MAKING AMERICA GREAT AGAIN!”

“When I look at that picture, Mr. Speaker, I have to say, I don't see anyone that looks like me in terms of color or gender," King said to Ryan. "You were one of the main people who said you want to do more for the Republican Party to expand the base. Some say this President really doesn't want to expand the base."

"So when I look at that picture, I have to say, I don't feel very celebratory, I feel very excluded," she said.

"I don't like the fact that you feel that way," Ryan responded. He added, "We need more minorities, more women in our party and I've been focusing on that kind of recruitment."

Ryan then pointed to Rep. Mia Love, R-Utah, whom he mentors.

“The person I’ve been a mentor to is Mia Love, literally, technically, I became a mentor to, her name is Mia Love, she’s somebody I recruited in the primary to come to Congress,” Ryan said. “There are a lot of candidates like Mia that we're recruiting all around the country.”

Ryan continued to say that even though he is retiring he was going to "keep being involved and focusing on inclusive, aspirational politics."

“I’m going to keep fighting for the things I believe in and that’s among the things I want to do,” he said. “I’m going to spend a lot of time with my friend Bob Woodson on poverty initiatives, those are the things I care a great deal about that frankly I have not been able to spend time on because of a pretty busy day job.”

King went on to ask him he if was “jumping ship” from the Republican party.

Ryan responded, “not at all.”

The Republican Party’s diversity problem has been under extra scrutiny since Trump became president. From Trump’s immigration plan to his almost exclusively all-male leadership picks, diversity has not appeared to be a priority for the administration.

In January 2017, a Pew Research Center report stated that the 115th Congress set a “new high for racial [and] ethnic diversity.” However, Pew noted that in the House, the increased diversity largely originated within newly-elected Democrats. According to the report, there had been an increase from 56 to 83 minority representatives since 2001—in the Democratic party. In the Republican party, there was an increase of eight representatives over the same time period.

In 2016, Ryan shared a photo on his Instagram page and Twitter and said that it was the "most number of Capitol Hill interns in a single selfie.” The racial diversity in the photo was almost non-existent. This likewise led to a lot of criticisms and discussions regarding diversity in politics, and indeed, the photo led to the creation of the hashtag #GOPSoWhite, a play on the #OscarsSoWhite.

Then there was the time Ryan tweeted—then quickly deleted—a message that praised a public high school secretary told AP News that she received a $1.50 weekly pay raise after the GOP tax cut bill passed—an extra $78 a year.

“A secretary at a public high school in Lancaster, PA, said she was pleasantly surprised her pay went up $1.50 a week… she said [that] will more than cover her Costco membership for the year,” the message said.

Many thought the tweet epitomized Ryan’s inability to comprehened the struggles of the working class.

As my colleague Matt Rosza wrote, Speaker Ryan may have tried to be a principled conservative in his early days, but he is likely to leave an unimpressive legacy.

“Even if one sets aside Ryan's willingness to toss aside his own principles by working with a demagogue, the House speaker has also been derided for revealing himself to be inept by not even selling out in the name of some kind of substantive legacy,” Rosza wrote. He continued: “After all, unlike his predecessor Nancy Pelosi, Ryan didn't manage to work with a president from his own party to pass (or repeal) a number of landmark bills. Instead his success was limited to a tax reform law that many expect will significantly worsen the budget deficit that Ryan has long vowed to rein in.”