Senators should ask Pompeo about relationships with anti-Muslim activists 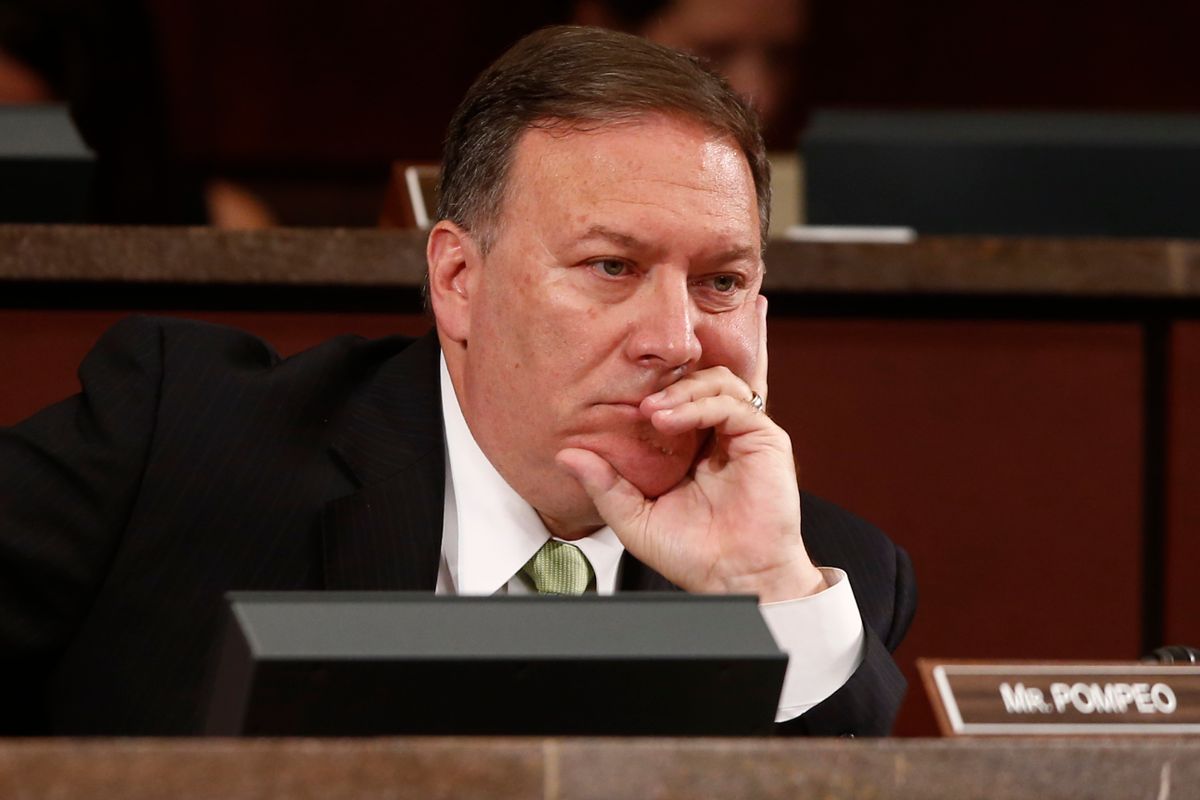 CIA Director Mike Pompeo will be questioned by the Senate Foreign Relations Committee on Thursday as senators consider his nomination to be secretary of state.

One topic that should come up in Pompeo’s confirmation hearing is his documented history of working with Frank Gaffney and Brigitte Gabriel, activists who routinely stir up hatred and fear of ordinary American Muslims, promote conspiracy theories, and push draconian policies meant to keep Muslims from immigrating to the U.S. and participating in public life.

Gaffney is a former Reagan administration official and the founder and president of the Center for Security Policy, which along with general national security hawkishness promotes the idea that American Muslims are taking part in a “civilizational jihad” against western civilization.

When, in 2015, Donald Trump called for a “total and complete shutdown of Muslims entering the United States,” he cited an unscientific online poll conducted by the Center for Security Policy that it claimed showed anti-American views among American Muslims.

In 2012, when then-Rep. Michele Bachmann accused a top Hillary Clinton aide and other Muslim Obama administration appointees of working for the Muslim Brotherhood, she was echoing claims made by Gaffney, who had even suggested restoring the House Un-American Activities Committeeto investigate such influence. Republican Sen. John McCain lambasted Bachmann at the time for promoting “unwarranted and unfounded attack on an honorable citizen.”

Gaffney also got in hot water with his fellow conservatives when he accused two members of the board of the American Conservative Union of working for the Muslim Brotherhood, causing him to be banned for a time from the ACU’s CPAC conference. In 2011, then-ACU chairman David Keene saidthat Gaffney had “become personally and  tiresomely obsessed with his weird belief that anyone who doesn’t agree with him . . . [must be] dupes of the nation’s enemies.” In 2016, Keene wrote a column calling Gaffney a “conspiracy nut.”

Along with accusing large numbers of political figures of being Muslim Brotherhood agents, Gaffney has dabbled in birtherism and the conspiracy theory that President Obama is a secret Muslim. More recently, Gaffney has been promoting the idea that an “axis of evil” made up of Black Lives Matter, “Occupy types” and Islamists is conspiring to take down the government.

While Gaffney’s conspiracy theorist track record has caused some conservatives to distance themselves from him, it apparently hasn’t been a problem for Pompeo. As a congressman, Pompeo appeared on Gaffney’s “Secure Freedom Radio” program more than 20 times from 2013 through 2016.

In one 2015 interview, Pompeo said he agreed with Gaffney’s suspicion that Obama had an “affinity” for radical Islam. On another occasion, Pompeo told Gaffney that he and his fellow members of Congress would back up military leaders if they decided to defy a potential order by Obama to close the prison at Guantanamo Bay. Several of the interviews were about the 2012 terrorist attack in Beghazi, Libya, which Pompeo worked tirelessly to blame on then-Secretary of State Hillary Clinton.

In addition to his frequent “Secure Freedom Radio” appearances, Pompeo spoke at a 2015 “Defeat Jihad Summit” hosted by Gaffney, where he thanked Gaffney for organizing the event to help address the fact that Obama had made the nation “unprepared to defend itself against the threat of the magnitude that the global jihadis present to us today.”

Brigitte Gabriel and ACT For America

When he was serving in Congress, Pompeo also forged a close relationship with ACT for America, the grassroots anti-Muslim organization led by Brigitte Gabriel.

After Trump nominated Pompeo to head the CIA, Gabriel boasted in a fundraising email that Pompeo had been “a steadfast ally of ours since the day he was elected to Congress,” including working “very closely” with the group in his role on the committee investigating the Benghazi attack. Gabriel boasted yet again of her group’s relationship with Pompeo in a direct mail piece late last year.

In September 2016, Pompeo sponsored a briefing ACT held at the U.S. Capitol, and he spoke at ACT briefings in 2015 and 2013. Gabriel said in her fundraising email that ACT awarded Pompeo its “National Security Eagle Award” in 2016.

Pompeo’s relationship with Gabriel and ACT for America is troubling. Gabriel has said that a “practicing Muslim, who believes in the teachings of the Quran, cannot be a loyal citizen to the United States of America.” After Khizr Khan, who had lost his son in Iraq, brandished a pocket copy of the Constitution at 2016’s Democratic National Convention, Gabriel said he was “lying” because he couldn’t be both a “practicing Muslim” and loyal to the laws of the United States. (Khan is now a board member of People For the American Way, which runs Right Wing Watch.)

Last year, Gabriel said that Muslim refugees “hate America, do not share our values and a lot of them actually are working against our country.” One of ACT’s policy priorities is ending the U.S. refugee resettlement program. At ACT’s 2016 conference, where Pompeo sponsored the legislative briefing, Gabriel called for defunding refugee resettlement because “most experts agree that more than 20 percent of Muslims are radicals” and “it is practically impossible to identify this group from the 75 or 80 percent who are not radicals.”

Gabriel has implied that President Obama could be secretly Muslim and said that he grew up “praying just like Osama bin Laden prayed.” She said of Obama in 2015: “He does not believe in American exceptionalism, he believes that America has to be on par with the rest of the world and therefore we are all one, and that’s why he wants to intermingle America, to have a population of every corner of the world, whether or not they are equal to us or not.”

Under Gabriel’s leadership, ACT has aggressively pushed for unnecessary Sharia law bans in the states, staged local fights against textbooks about Islam that are “literally brainwashing our students to prepare them to turn against our own soldiers and our own military and government by basically feeding them the talking points of al-Qaeda,” and fought against Muslim Student Associations on college campuses and halal food in schools and prisons.

Last month, we submitted a Freedom of Information Act request to the CIA to find out if Pompeo’s relationships with Gaffney and Gabriel have continued during his time as CIA director.