Trump, Bolton and the looming threat of war with Russia: Could the president's corruption save us? 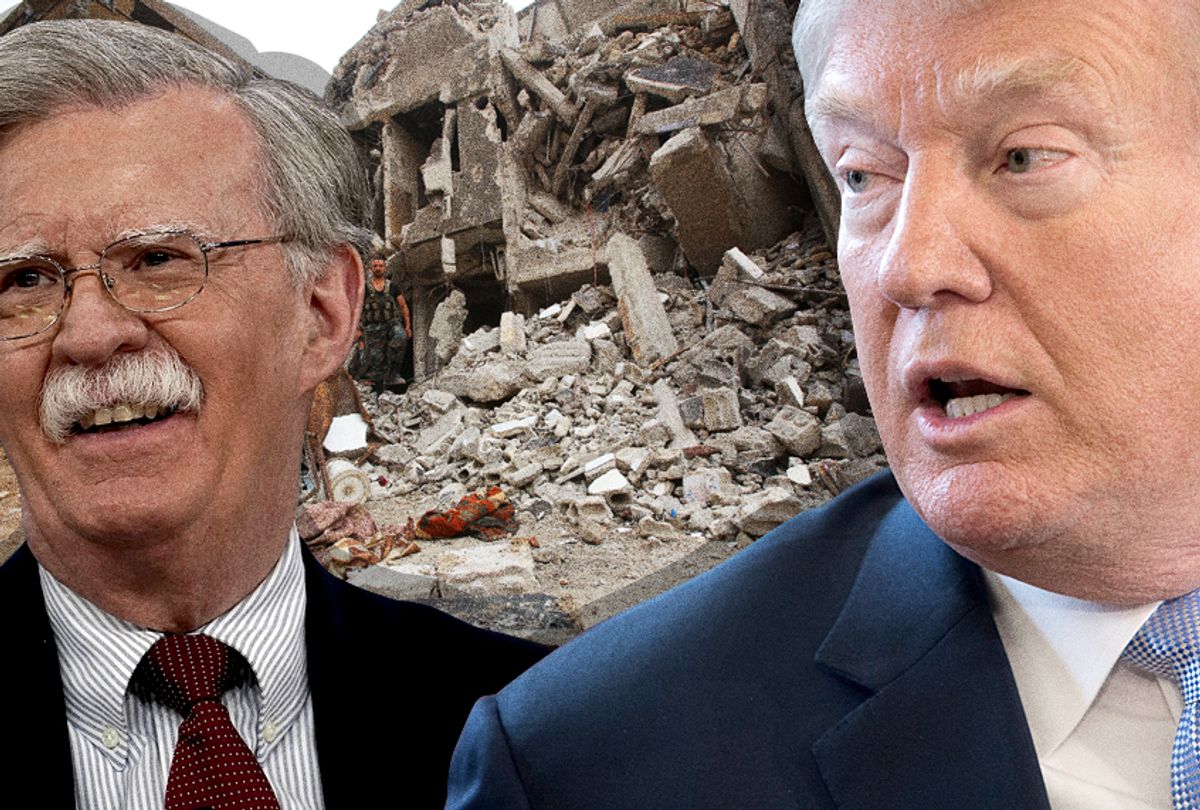 If there has ever been anything one could call a Trump doctrine (other than "Bomb the shit out of 'em") it would have to be "Don't ever let anyone know what you are planning to do." Donald Trump railed against Barack Obama and George W. Bush for announced pullouts from Iraq and Afghanistan, always showing by his comments that he had no understanding of, or respect for, treaties and diplomatic accords. He simply believes the U.S. can do what it wants, whenever it wants, in foreign countries. This is not surprising, since he also repeatedly insisted that the U.S. should be able to seize the natural resources of any country in which it has troops, either not caring or not understanding that doing so would be a war crime.

During the 2016 campaign, when asked about his plans to defeat ISIS, Trump said, "I don't want to broadcast to the enemy exactly what my plan is," and he has consistently reiterated his "surprise attack" doctrine as president, as he did last year:

He literally seems to believe that the only military tactics and strategies are surprise attacks, carpet bombing, civilian bloodshed and mass executions. Torture and wholesale slaughter is how you teach the enemy that they cannot defeat you. The more unpredictable this global superpower is (according to the Trump doctrine), the more the world will fear it and the more other nations will capitulate to its demands. It's simple: Might makes right.

So it was actually something of a relief to see Trump impulsively tweet at Russia on Wednesday morning, warning that U.S. missiles would be coming at Syria. Whether the Russians will perceive this as a favor is not known, but Trump gave them plenty of time to re-evaluate their strategy and possibly engage in talks or some kind of delaying action. It's not an optimal way to conduct military affairs, but it could be worse. Perhaps by warning his adversary, however impetuously, it will lead to less loss of life in an impoverished country already overwhelmed by violence and terror. That's one reason why more thoughtful leaders announce their plans.

Unfortunately, this also confirms that Trump still doesn't care about gathering allies to form a united front in these situations. Apparently, there had been no consensus reached among the NATO countries, much less the rest of the world, and the Pentagon had no idea that Trump was going to tweet out a threat to send missiles at Syrian targets.

How did this happen? Well, it's reasonable to assume that Trump was watching "Fox & Friends" at about 6:15 a.m., when Brian Kilmeade said this:

This morning the Russian ambassador hopped on Lebanese TV and said, "If there is a strike by the Americans then missiles will be downed and we will even go to the source of those rockets. So they’re saying, ‘Don’t do it, and if you do do it, we’re coming after you.’”

Trump’s tweet was sent about half an hour later.

We don't know if he consulted with anyone to confirm that the Russian ambassador in Lebanon actually said anything like that. If he asked his new national security adviser, John Bolton, whether he should fire back on Twitter, it's likely he was told, "You go boy." Most professionals would think it was inane for a president to use Twitter to threaten military action and that responding in such a way to some random diplomat's purported ramblings was dangerous and stupid. But Bolton doesn't care about international alliances either, and he's likely very happy to see Trump get in Russia's face, making it clear that Bolton is the new sheriff in town.

Trump seems to have regretted his outburst, however, but not because he showed his hand. The tweets he sent following the missile threat sounded almost conciliatory toward Vladimir Putin:

Somebody needs to tell him that the only "arms race" we are in is his race to spend the country into penury on unneeded military hardware.

Then Trump tried to shift the blame for any "issues" with Russia onto Robert Mueller's investigation, which he may think was a clever deflection from his ill-considered threat but is actually quite revealing of his own state of mind:

It's obvious that Trump is dying to bomb somebody, somewhere. But the only war that's currently available is one in which Russia is deeply involved. No matter how much he is provoked and how impulsively he reacts in the moment, he finds it necessary to publicly backtrack and make clear that he doesn't wish to personally antagonize the Russian president. To the extent he believes he must respond militarily to the gas attack in Syria, he's trying to make it clear that it's because of Democrats and Obama and Mueller and the Department of Justice and the media and everyone else who has created all this unpleasantness against his will.

Nobody buys this, of course, least of all Putin. Indeed, the Russian president may be enjoying the spectacle of Trump squirming as he tries to restrain himself from becoming the brutal, remorseless "war president" he is temperamentally suited to be -- perhaps because he is hamstrung by something Putin knows and Mueller is close to finding.

I'm hard-pressed to see how more death in Syria will amount to anything positive. So I can only wish Trump luck in beating back his worst instincts, and Bolton's advice, even if it is only because the president is terrified of whatever Putin might reveal about him. Creating some space for diplomacy or even just a pause in an unstable situation is better than thoughtless escalation. It's hard to believe, but this is one time when Trump's personal corruption may end up being a small service to mankind.