"California National Guard will not be enforcing federal immigration laws," Brown wrote in a letter 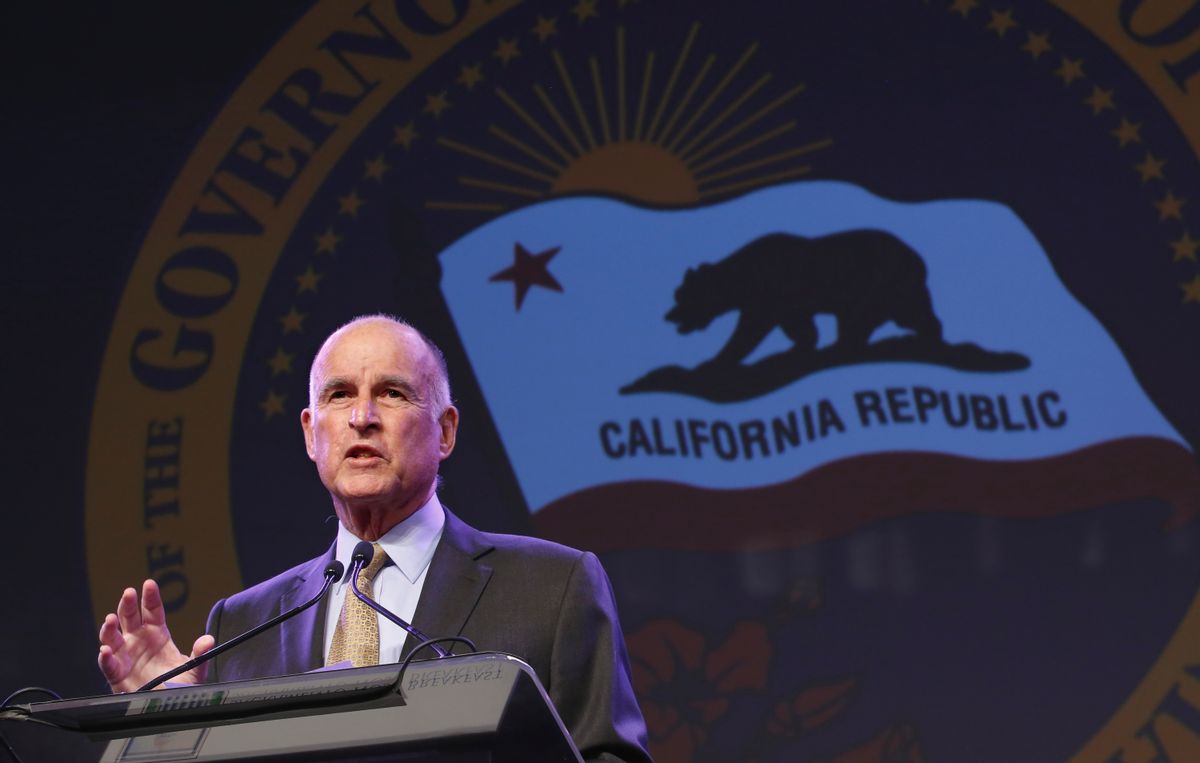 California Governor Jerry Brown announced on Wednesday that the California National Guard will accept federal funds to add 400 guards statewide for its “ongoing going program to combat transnational crime.” Currently, the program is staffed by 250 personnel statewide, with 55 guards at the California-Mexico border. Brown was the last governor of a border state to respond to the Trump Administration.

In a letter addressed to Secretary of Defense Jim Mattis and Homeland Security Secretary Kirstjen Nielsen, Brown explained that the funding will allow the Guard in California to “do what it does best,” which includes supporting efforts to target transnational criminal organizations, human trafficking, drug smuggling along the the border. Brown didn’t address how many of the 400 guards will be deployed to the border.

Brown continued to explain that the state of California has cooperated in similar “targeted assistance” efforts in 2006 and in 2010. He said he’s accepting the funds with one caveat:

Brown explains that immigrant apprehensions are at the lowest they’ve been in the last 50 years.

Gov. Brown said he agreed with the Catholic Bishops who have said that that state and federal governments should work collaboratively and to ensure that border communities aren’t massively disrupted by the presence of the National Guard.

Brown’s move to accept the federal funds may come as a surprise to some. Indeed, it does signal a tiny act of cooperation with the Trump administration, one that has been seemingly at odds with the state of California and Brown's progressive politics.

Trump tweeted that Brown is “doing the right thing,” not addressing Brown’s caveat though. Trump's response was strange given that he had previously called out California on Twitter, and seems to think poorly of the state generally.

“California Governor Jerry Brown is doing the right thing and sending the National Guard to the Border," Trump's tweet read. “Thank you Jerry, good move for the safety of our Country!”

Sec. Nielsen also tweeted she was happy to have “all four border governors working with us.”

Other governors have said they would not accept federal funds—including Oregon Gov. Kate Brown, who shared her thoughts on Twitter.

“If @realDonaldTrump asks me to deploy Oregon Guard troops to the Mexico border, I’ll say no,” she tweeted. “As Commander of Oregon’s Guard, I’m deeply troubled by Trump’s plan to militarize our border.”

Neighboring border states are already making plans to deploy guars to the border. In Arizona, 338 National Guard members are expected to be deployed to the border.

“This mission is about providing manpower and resources to support federal, state, county, tribal and local law enforcement agencies in stopping the flow of criminals, narcotics, weapons and ammunition that is being trafficked into our state,” Gov. Doug Ducey said.

Texas Governor Greg Abbott also announced that he would cooperate with Trump’s initiative.

"Texas is preparing to increase our National Guard presence to more than 1,000 along our southern border," said Gov. Abbott. "The number of people coming across the border has increased more than 200 percent over this time last year. The addition of National Guard on the border has proven to have a meaningful impact to reduce the flow of people and illegal activities coming across the border."

Indeed, this would not be the first time that the National Guard has been deployed to the southern border.  In 2010, President Barack Obama’s administration sent 1,200 National Guardsmen to support Homeland Security's Customs and Border Protection and Immigration and Customs Enforcement divisions amid heightened concerns about drug trafficking. Previously, President George W. Bush deployed 6,000 guardsmen to the border from 2006 to 2008, a mission that reportedly cost a total of $1.2 billion, according to CNN.

As the Washington Post reported, the Pentagon provided new information earlier this week as to what the new border activity will entail. According to the report, guards will use drones to provide “air support.” Critical details like cost, and how long the operation is expected to last, have yet to be officially answered.