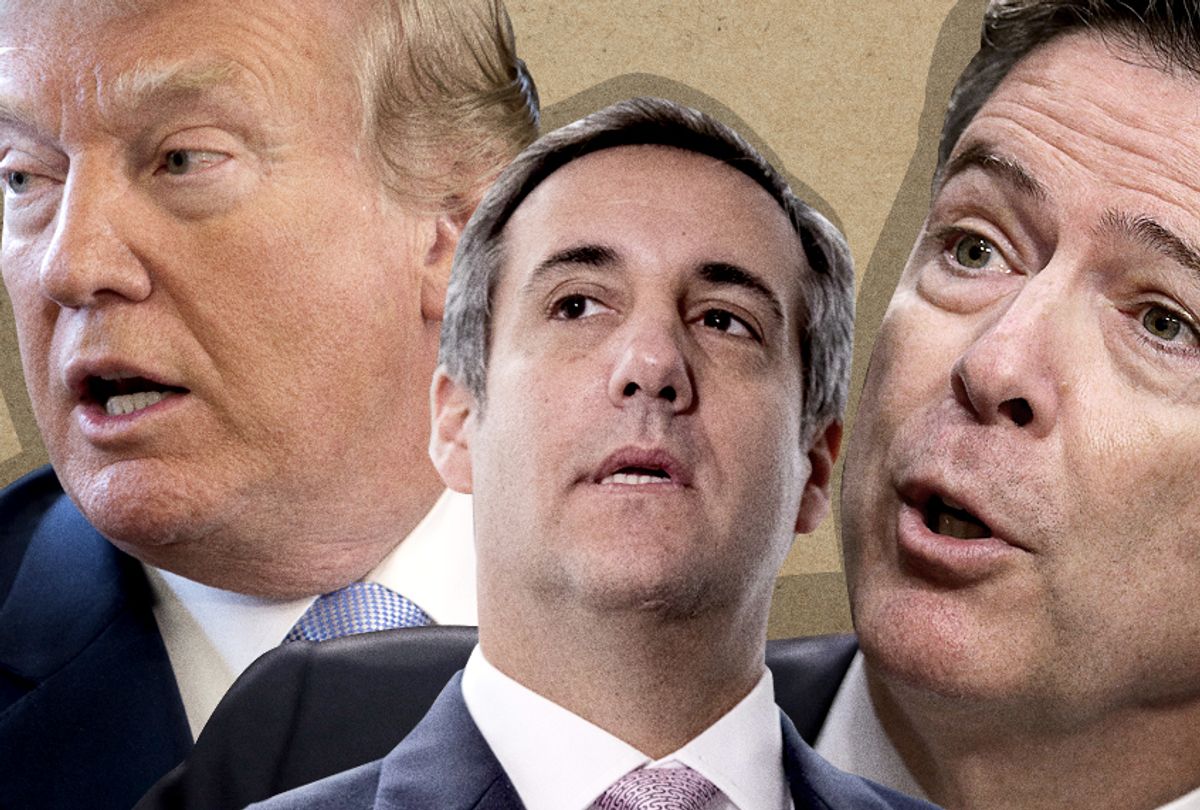 It’s January 20, 2017, and your name is Donald J. Trump, and you’re a real estate developer from Manhattan by way of Queens, and you’ve just settled into the White House, so what do you do? Well, if you’re Donald Trump, you immediately start worrying about who’s running the FBI and the Department of Justice, because those are the guys who will have the power to investigate and prosecute you. You know what you did to get elected. In just about a month, you’ll be standing in front of the White House press corps at your first press conference, and you’ll be telling them that you didn’t have anything to do with any Russians, that nobody on your campaign talked to any Russians, but you know they won’t let up. You know what’s coming. You know you need some protection. You need to start building walls. You need to put loyal people in there, that’s what you need.

You know what you should have done? You should have appointed Michael Cohen as attorney general! You should have put your very own attack-dog lawyer in there! Think of it! Nixon had John Mitchell, Reagan had Ed Meese, and your man Roy Cohn might be dead, but you’d have Attorney General Michael Cohen! Been with you for years, owes his whole life to you, took care of all those goddamned bimbo eruptions; you’ve been able to sic him on anybody who pissed you off, and Michael would go at them like a German Shepherd! Sending letters, calling them on the phone, filing lawsuits . . . Michael would do anything you told him to do. Anything! Nosy journalist wrote a book that pissed you off? Call Michael in and get him to file a suit! There’s a problem, little thing that nothing the guy wrote about you was untrue or made up? Who cares! Sue him! And what does he do? Michael sues him!

You think if you called up Michael and said I want you to file some charges on Hillary and her emails, he’d do it? You bet your sweet ass he would! He’d have somebody serving her with a subpoena and going through her drawers by lunchtime. He’d have her under indictment by dinner! Just think of that perp walk! Hillary in her little pantsuit being led out of Chappaqua in cuffs! Beautiful!

And over at the FBI, you know what you should have done? You should have fired that prep-monster Comey and put Keith Schiller in there! Keith would take a bullet for you! Hell, he’s been your bodyguard for damn near 15 years. You think you’d have to invite Keith over for dinner in the White House and ask him for his loyalty? Hell no, you wouldn’t! Keith’s so loyal, rumor has it he’s been escorting the ladies in and out of your hotel suites for years, and never breathed a word of it to anybody. If you had Keith into the Oval and you said, hey I want you to figure out a way to go easy on my man Michael Flynn, you could depend on old Keith to take care of him for you. Get those FBI goons to back off, tear up the notes from the damn interview they did with him, throw the whole mess in the trash. What the hell was that all about, anyway? Mike talking to Sergey about lifting sanctions? What’s the big deal? You had Erik Prince talking to Vladimir’s boy for you out there in the Seychelles! Putin knows it’s a done deal! What do they have to beat up on poor Mike Flynn for?

That’s what you should have done. Fuck all these people playing establishment games. Look what happened. They told you Sessions would walk right through his confirmation hearings because he was a senator, and those guys scratch each other’s backs, and what happens? That little prick from Minnesota throws a couple of curveballs at him, and Sessions steps in it, and the next thing you know, he’s over there at the Justice Department and a bunch of Democrat hacks are leading him around by the nose, so he recuses himself from the Russia investigation! What the hell was that? They shove some bullshit little regulation under his nose and he folds like a cheap suit.

And this Comey character. Somebody said he’s a Republican. What kind of Republican can’t take a hint? You lead him down the garden path like a goddamn New York building inspector. What do you have to do with these guys? Don’t they understand loyalty? The son of a bitch is working for you! Who does he think does the hiring and firing? Nancy Pelosi? Who got elected? Who’s running things in Washington now? Has he seen Loretta Lynch walking around lately? Obama? Hell no! And then he goes up on Capitol Hill and volunteers that they’ve been investigating the campaign for nine endless months, what does he figure you’re going to do? Have him down to Mar-a-Lago for a round of golf?

See, that’s the difference between New York and Washington. Back in New York, everybody knows the way things work. Building inspector comes around, he sees a crack in the wall, he knows it’s just plaster! What does plaster do anyway? It’s New York. It gets hot. It gets cold. Plaster cracks. Everybody knows that. So Michael files a piece of paper. Maybe you pay a little fine. The building inspector goes back to the Department of Buildings, and everybody’s happy. Crack? What crack? Anybody see a crack around here?

In Washington, somebody makes a phone call, everybody’s listening in. Mike Flynn’s on the beach down in the Dominican Republic, he gets a call from Sergey, it’s like he’s on Broadway. He’s got an audience of thousands. They don’t have cracks in Washington, they have leaks.

And now look where you are. Comey’s got a book out, this guy Mueller’s banging on the door, some assholes in New York broke into Michael’s office and took all of his Trump Organization files, Sessions is over there at Justice talking about locking up pot smokers, and the new guy at the FBI can’t take a hint, either.

You know who would have known what to do? Your man Roy Cohn. He once said that he and J. Edgar were best friends, been hanging out since they were chasing commies back in the ’50s. Those were the days. Everybody had something on everybody else. Nobody thought they were too high and mighty to look the other way once in a while.