"This is exactly where we are now": A chat with Sandra Oh and the cast of "Killing Eve"

Salon talks to Sandra Oh, Jodie Comer and Fiona Shaw about the roles women play in the world and their killer show 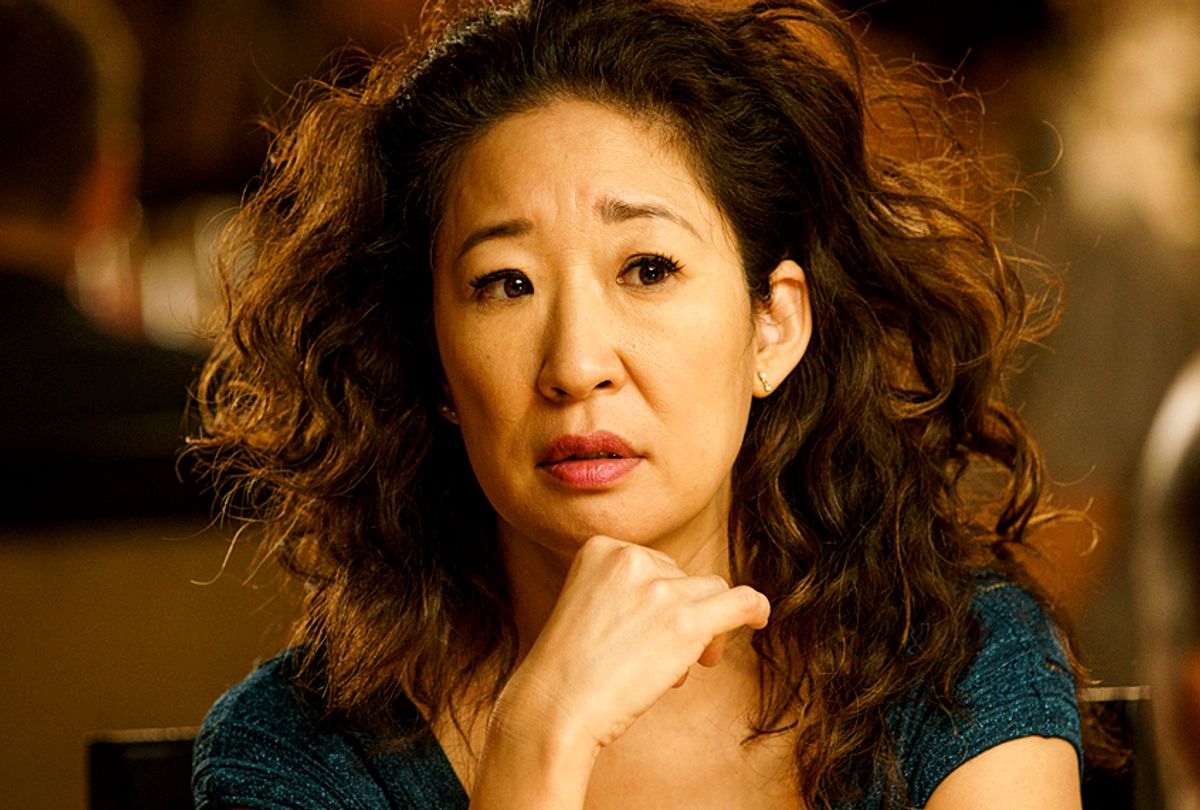 BBC America’s spy thriller “Killing Eve” is about much more than murder.

Ostensibly the killing’s the thing, of course. But woven into the search-and-destroy game between Sandra Oh’s MI5 agent Eve Polastri and Villanelle, the chic, youthful assassin played by Jodie Comer, are commentaries on gender dynamics in the workplace and queries about whether the power of sisterhood does indeed conquer all.

Every episode gives viewers a great deal to ponder, but few have mulled about its significance as deeply as Oh, its star.

My interview with Oh at a recent industry event felt conspiratorial at times; she leans in close, pauses to make nebulous ideas concise. When a realization dawns on her, the volume of her voice softens as it grows animated, inviting the interviewer to draw nearer too. It felt a bit like splitting a sundae at lunch and, through conversation, gently divining the mysterious secret flavors infused within its molecules. But her low voice is as confident as she is utterly candid about elements of the production that still fascinate her.

These details weren’t hidden behind the scenes, either. It’s all in front of the viewer, displayed with the assured attitude of its creator and executive producer Phoebe Waller-Bridge, who makes “Killing Eve” as intense a portrait of womanhood and power as it is a mystery caper.

When the series opens, Eve is the exemplar of a “good” woman in the workplace. She doesn’t make waves, observes her department’s structure and doesn’t show up her boss. But her curiosity and the nagging sense that she’s right leads her to step beyond her prescribed boundaries. This gets her noticed by Carolyn Martens (Fiona Shaw), the seasoned, formidable head of MI6’s Russia desk. Carolyn recruits Eve into an off-the-book assignment that soon puts Villanelle on Eve's radar, and Eve on Villanelle’s.

“I was looking at the first two episodes and I kind of almost forgot that people don't believe her,” Oh recalled. “That she struggles to remain confident in a position of power. There is a moment where her male colleague is really questioning her, that you see her not quite tremble, but you see her say ‘I need to take a breath.’

“This is exactly where we are now, and it's great to play someone who then moves through it,” Oh continued. “She is going through exactly that struggle of finding her voice in a place that has not empowered her.”

Comer’s Villanelle is styled to be Eve’s opposite. “She does whatever she wants,” Comer said. “She is sorry for nothing, and she's very confident in herself. But as you find over the series, she definitely kind of loses her reins over that. Her control is, in some respects, taken away from her. She doesn't know how to deal with that.”

Describing “Killing Eve” as a bizarre sort of courtship is not altogether wrong. As I wrote in my review, the saucy kick of the series comes in witnessing “two women who see the truth of each other, each sizing up the other and, in an undeniably perverse way, loving the view.” We're only two episodes into its debut season, and the series has already been renewed for a follow-up.

And when I spoke with Oh, it was clear that she sits in awe of its meaning to the women who see it, for women who made it, and to scripted television in general.

“What I love is that Eve is a middle-aged lady who walks around with a handbag,” she mused. “And Villanelle is a 20-year-old, beautiful, strong, all these things. You can feel the things, psychologically, that someone in her middle age is trying to grapple with. How do I find a new sense of power? Villanelle sees something in Eve which is very empowering — something that Eve does not see in herself and that's something that other people don't see.”

Oh gestures at a table nearby where co-stars Comer, Shaw and Kirby Howell-Baptiste (who plays Eve’s cheeky co-worker Elena Felton) are seated, and she marvels at the range of women represented in the series — ages, ethnicities, archetypes. The female leads are written to resist expectations of their characters, starting with Eve.

And Oh is also very conscious of the fact that “Killing Eve” is at the front of a practice of casually inclusive casting. She is one of a scant handful of Asian leads on television series right now, and she takes that very seriously.

As vital to Oh as the rising tide of empowerment is “for me, opening in that conversation about parity is also diversifying representation,” she said. “It’s just such a big part of myself and my identity and also, not necessarily the forefront of why I do what I do, but . . . ” she stops to think, then dips her tone into a soft level of seriousness — “I am completely aware that people in my community, the Asian-American community, do not have the representation on screen that we so sorely need. I'm not going to say deserve, I'm saying need. There is a cultural and psychological need to be represented, and I'm happy to do that.”

Oh also recognizes that she’s been fortunate in that respect, citing the decade she spent playing Cristina Yang on ABC’s “Grey’s Anatomy” and working with an executive producer and creator on the forefront of inclusive casting.

Waller-Bridge also exercises a paradigm that deliberately adopts a female-centered point of view that is realistic and refuses to pull its punches. Her women are complicated and experience the annoyances and frustrations real-world women live with.

Villanelle, for instance, is very good at what she does. She’s also a loose cannon, playfully psychotic and unflinching about killing . . . and yet her male handler often treats her like a petulant child, as evidenced in this brief clip featured exclusively on Salon.

“I was just saying to someone, ‘Why is it every female assassin has to be incredibly sexy, and all the rest?” Comer wondered aloud in a separate conversation. And Shaw, a veteran in her industry, replies “Because she has to be dominatable ultimately. By men.”

“That’s what I found too refreshing about Phoebe's writing and I thought, ‘This is brilliant!’” Comer continued. “There was so much humor in it, and charisma, and she’s kind of normal, you know, where most assassins are otherworldly. She’s a real person.”

That ease with one another carries over into the series, transforming what could be a simple cat-and-mouse tale into a visual metaphor for workplace politics and the pitfalls faced by women exercising power in environments dominated by men. This is true for the agents in British intelligence as well as for Villanelle.

“In the world, as we've all experienced as women, men recognize a woman who does what she wants as being unruly, or a woman being sort of like a diva, or boss,” Howell-Baptiste observed. “Whereas, I think that's a strength that she has. Because it's a strength that we recognize in men of someone who's very steadfast, and very strong.”

“It’s brilliant to play someone like that who just does what they want to do,” Comer added.  “Her attachment is her world, and her apartment, and her . . . what's the word I'm trying to think of? It's the most obvious word in the world. When you're on your own.”

Then, in a flash it comes to her. “Independence!” With that she breaks into a killer smile, brimming with satisfaction.