John Scalzi talks being socially conscious as a popular writer 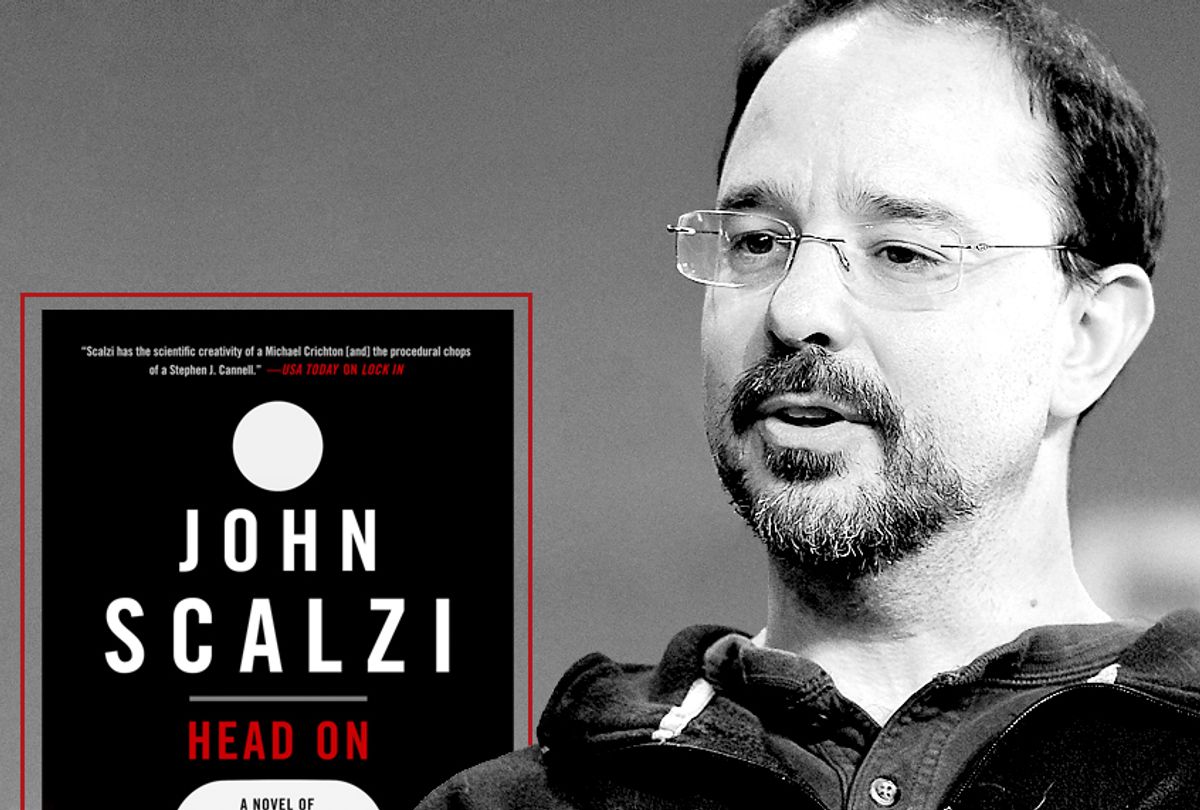 Scalzi is the authorial mind behind the "Old Man's War" series, behind the award-winning "Redshirts" and behind the "Lock In" series. It is the upcoming release of the new entry in that canon, "Head On," that prompted Salon to reach out to him about his book.

Of course, given that this is 2018 and politics has intersected quite closely with popular culture — and especially considering that "Head On" deals with a future world in which people with physical disabilities can interact with the rest of the world using sophisticated robots called "Threeps" — our conversation meandered quite a bit. Delightfully so, if I may be so bold as to offer that observation.

In what ways does your book try to address contemporary issues involving disability right both directly and through metaphor?

Scalzi: Well, one of the things that I always acknowledge, particularly when dealing with disability issues is that as an able-bodied person, I’m coming to it from a place of needing to learn and to have knowledge. So one of the things that I always do is I keep in touch with folks who I know are part of cultures where what are usually considered disabilities by outside folks who are part of their everyday lives — friends of mine who are deaf, friends of mine who have other mobility or other issues. So I spend a lot of time watching and listening. One of the things that I’m always very careful to do is to make the point that what I’m talking about with regard to Haden is informed by what I observe but it’s not one-to-one. So I’m very wary of trying to put myself in a position where I’m saying, “Well, I’ve read a lot about disability and therefore I have the ability to speak about this.”

At the same time, one of the things that I want to do is when talking about the Hadens who are a community that what would generally be classified as a community of disabled people, that way that I’ve developed that, and the way that they interact with the world, and the way that the world interacts with them has some resemblance in the dynamic as it happens with folks who are in disability cultures at least particularly here in the US.

With that regard, one of the things that I’ve always been upfront about with people is I know I’m going to screw things up. Tell me where I screw so that the next time when I screw up, it’s not the same as before. But the other thing that’s been really gratifying is folks from various communities coming to me and saying, “These are the things that you’ve gotten right and that’s great. Here are some things for you to think about in the future when you’re building this universe of folks who are interacting with the able-body universe and the able-body universe trying to incorporate them into its world.” So in that sort of sense, I do think that there are some resonances simply because part of my job as a writer is to pay attention, but again I’m always hesitant to make any proclamations and also warning people. It’s like the world that I created, I created specifically for fiction. There are going to be some resonances, but I would be very careful about saying, “Yes, this is exactly what disability communities have to deal with on a day-to-day basis today.”

I think that’s a very humble and wise perspective. Seriously, I love the Socrates quote, “The key to being wise is to admit what you don’t know.”

Scalzi: Well, and I think of this as the important thing. I mean of the things that fiction in the general sense, and particularly I think speculative fiction has been going through over the last decade, especially is two things: The emergence of folks who were previously marginalized coming in to the mainstream and basically claiming their place at the table in speculative fiction.

The other thing is, kind of the flipside of that, the folks who had previously just assumed that they could write about others and to have that otherness not be criticized or their attempt at the otherness not to be criticized because they should get at the very least credit for trying, that doesn’t fly anymore either. So what has happened are two things:

(1) We do get more authentic literature because you have more voices and it serves notice to the people who like me had the ability to sort of cruise on reputation and good intentions that reputation and good intentions aren’t enough. You actually have to do research, and you have to be better, and you have to make sure that what you’re doing not only speaks to people who don’t know that culture, but speaks to the people who do know that culture. It can be tough sometimes because, speaking as a straight white man, I’m used to being right all the time, or at least thinking that I’m right, and not having a whole lot of people correct me.

The good news is that I have people who are willing to correct me and have been reasonably gentle about it so that my developmental curve has been fairly non-disruptive, I think is the best way to put it. I think it helps that people do recognize that I want to get things as right as possible and have been willing to help me with that rather than assuming I’m going to be antagonistic to them or that they need to be antagonistic to me.

You mentioned having gender male privilege and in your book, you make a point of not specifying the gender of the character, FBI Agent Chris Shane. Have you received any backlash from you fan base for that decision?

Scalzi: Not backlash. I received lots of criticism and I think we need to be clear that criticism is not necessarily the same thing as backlash, right, because there are folks who are gender fluid, or who are trans, or who kind of feel agender and they are looking at the representation of this and they’re like, “Does this actually work or does it not?” There have been folks who are like, “No. We see what he’s doing, but we don’t think it quite works.”...

Legitimate criticism that I am trying to specify that Chris has no gender or not no gender, but I don’t reveal the gender in many ways. Because Chris is a Haden that gender issues are either mitigated or sort of shuffled off, but they made a very cogent point of, well, be that as it may, there are certain things that, for example, women have to go through just because they are women that it doesn’t seem like Chris is going through. Even if you don’t reveal gender, this person believed that because of the nature of how Chris moves with the world, it signals heavily that Chris is male and I think that’s a reasonable criticism and interpretation.

Something that when I was writing "Head On," I tried to incorporate into my worldview while I was writing because as I’ve said numerous times, even before I started writing Chris, I made the decision that I would not gender Chris, that I don’t know what Chris’ gender is or whether is Chris is male or Chris is female, whether Chris considers themselves agender or just doesn’t care and its nobody’s business, and folks have said things like, “Well, wouldn’t Chris’ parents have had a gender reveal party, or something, or so on and so forth?” My feeling about it is that they kept it private and after a certain point, they saw no point in letting other people know. But ultimately, there is criticism of the portrayal and I think criticism of that portrayal is absolutely fair in part because, again, I’m writing from perspective of someone who very definitely does have gender, definitely moves through the world with all the pluses and minuses of his particular gender.

I’ve been fortunate that again by and large, the criticism has been… there hasn’t been a huge amount of backlash, but there has been substantial criticism. I certainly welcome the criticism and I think it has the potential usually to make future work in that universe better.