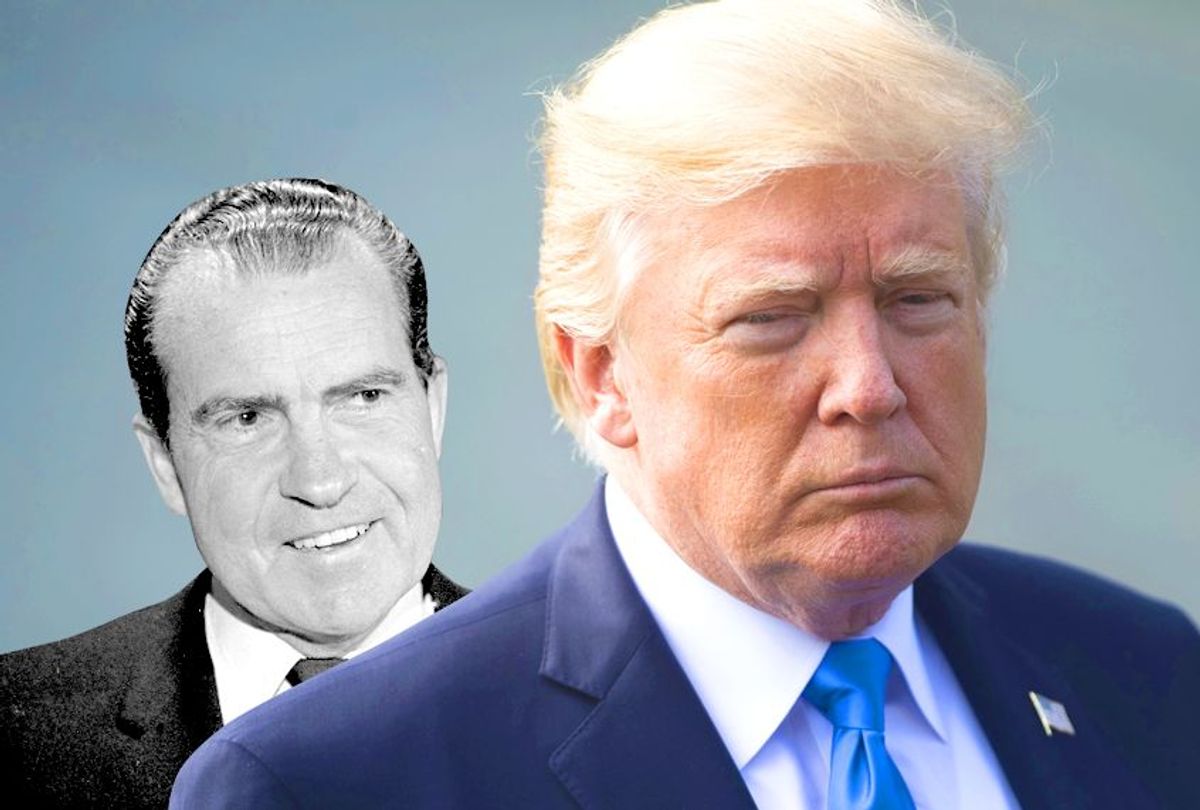 President Donald Trump is responding to the raid on the office of his attorney, Michael Cohen, by making arguments reminiscent of another Republican president with whom he probably doesn't want to be associated — President Richard Nixon.

On an immediate level, this may seem like a simple case of Trump and Cohen grasping at straws to conceal whatever they feel might be legally damaging to them in Cohen's documents. It is unlikely that the presiding judge will allow them to effectively transform the search warrant into a subpoena — which is what the pair are essentially requesting, when they ask to be able to go through the documents to remove anything that might be protected by attorney/client privilege.

But there is an aspect of this that is positively Nixonian in nature. When Nixon was ordered by special prosecutor Archibald Cox to turn over tapes of secret recordings he had made of White House conversations, the president refused. When the U.S. Court of Appeals ruled that Nixon had to comply with Cox's request, the president attempted to craft a deal with Attorney General Elliot Richardson that would allow him to review what was in the tapes first, summarize their contents to a federal judge and then allow Sen. John Stennis (who, despite being a Democrat from Mississippi, was not unsympathetic to Nixon) to listen to the recordings and independently verify that Nixon had not left anything important out of them.

The Nixon camp had claimed this was to protect matters of interest to national security. But although Richardson agreed to the compromise, Cox did not, and Nixon ordered him fired. What followed was the "Saturday night massacre": Richardson resigned instead of following through on the unconstitutional order; Deputy Attorney General William Ruckelshaus likewise resigned instead of doing so, so the job of firing Cox was ultimately left to U. S. Solicitor General Robert Bork — whose actions served as the argument against his confirmation to the Supreme Court 14 years later.

Which brings us to 2018. Both Nixon and Trump have said they should have the right to review documents seized in order to investigate potential criminal activity, and cited legal rights that may not apply to their situations. For Nixon, it was executive privilege; for Trump and Cohen, it is attorney-client privilege. The courts found that Nixon's argument was invalid, and they're now looking at Trump's claims.

When Nixon was invoking his privilege, the former president was trying to hide something — a so-called "smoking gun" in which Nixon was heard asking his officials to try to convince the CIA to request that the FBI stop investigating the Watergate burglary on the grounds of national security (that just happened to be the same logic Nixon used to try to keep the tapes from Cox).

Special prosecutor Leon Jaworski concluded that, by doing this, Nixon had entered into a criminal conspiracy to obstruct justice.

Nixon was convinced that the investigation into his actions was politically motivated — or, at the very least, that the accusation of partisan bias was enough for Republicans to discredit it. Just as Nixon claimed that the Watergate scandal had been cooked up by his political enemies, Cohen's court filing argued that "the appointment of a Special Master will protect the integrity of the Government's investigation from the toxic partisan politics of the day and attacks on the impartiality of the Justice Department and USAO."

A legal filing from the firm McDermott, Will & Emery also mentioned that "as the Court is surely aware, there is a growing public debate about whether criminal and congressional investigations by the government are being undertaken impartially, free of any political bias or partisan motivation."

One thing is clear, though. Presidents like Nixon and Trump don't ask to cherry pick what the people investigating them can see because they fear it will make themselves look too good. The fact that this request is even being made strongly suggests that Trump and Cohen know they will find themselves in big trouble. The only question is what the trouble will be and why.

Meanwhile, a pair of legal experts sounded off on the Trump's lawyers' demands to review Cohen's computers, and explained just why Trump's request was so odd.

First there was Professor Orin Kerr of the University of Southern California's Gould School of Law.

Then there was former federal prosecutor and current candidate for Illinois Attorney General Renato Mariotti.