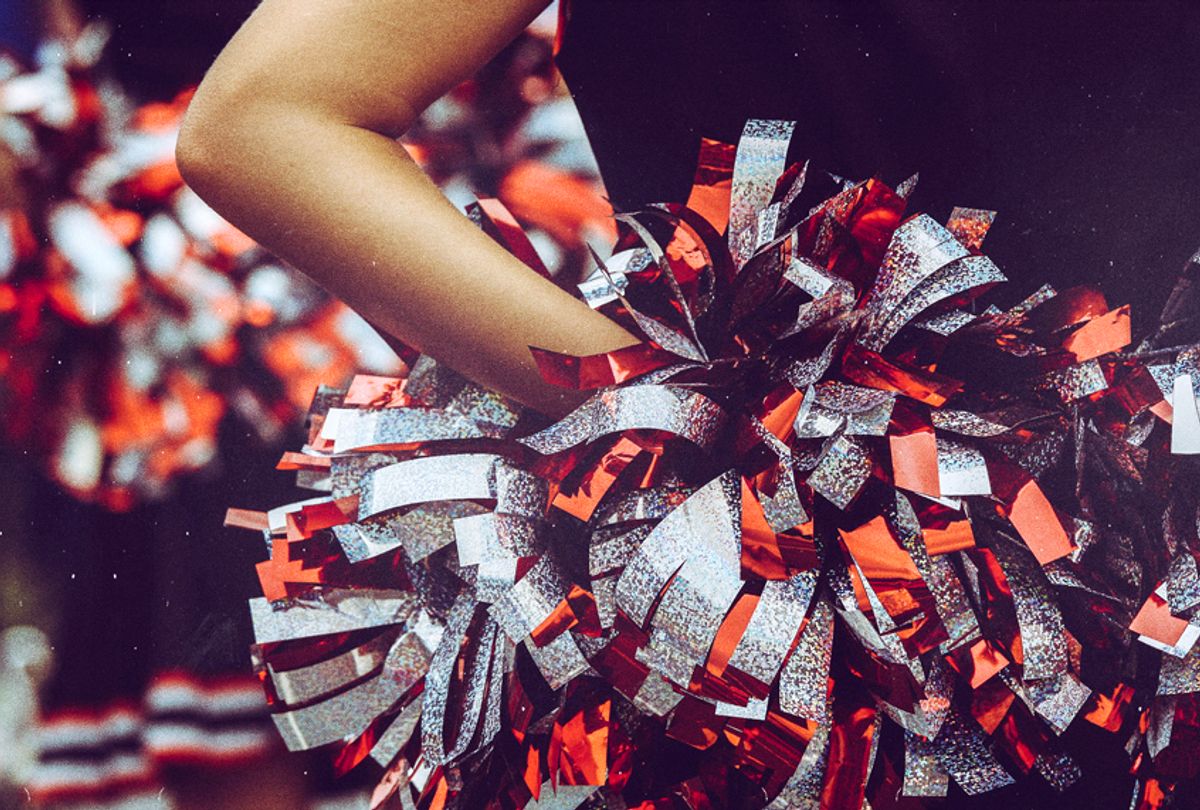 Is there any other field in which the idea of treating women as second class citizens is as transparent as it is in professional sports and its cheerleaders? It's not just that athletes rake in millions while the cheerleaders who root for them can earn as little as $5 hour. It's also that the women are held to an absurd moral code of conduct, all while being exposed to routine harassment. What a trifecta of nonsense they endure. But now, they're speaking out about it.

Davis, on the other hand, had already had to make her Instagram private after receiving messages from players — messages that she says she never responded to — the team asked all its cheerleaders to switch their social media to private. She was also in the midst of an investigation for violating another rule against attending parties where players are present. When she was fired, she says the HR person told her that "It was a distasteful photo and it made me seem guilty of the rumors going around about me." Because a woman who posts a photo of herself in lingerie is guilty of whatever rumors people spread about her.

But Davis decided to fire back. In March, she filed a complaint with the Equal Employment Opportunity Commission asserting that the team holds its female cheerleaders and male players to entirely different standards of behavior. Her attorney Sara Blackwell told the BBC last month that "The Saintsations should be treated as athletes, which is what they are. This is a clear discrimination based on gender."

In a recent New York Times report, the paper confirmed it had reviewed the team's handbook for cheerleaders and affirmed that it "requires cheerleaders to avoid contact with players, in person or online, even though players are not penalized for pursuing such engagement with cheerleaders. The cheerleaders must block players from following them on social media and cannot post photos of themselves in Saints gear. The players are not required to do any of these things." And here's where it gets really insane — the guidelines also stipulate that "Cheerleaders are told not to dine in the same restaurant as players, or speak to them in any detail. If a Saints cheerleader enters a restaurant and a player is already there, she must leave. If a cheerleader is in a restaurant and a player arrives afterward, she must leave."

Imagine having a job where one of the conditions is that during your non-work hours, you are expected to flee a steakhouse in the middle of your appetizers if Drew Brees suddenly shows up. Enragingly, the Times says that "The team says its rules are designed to protect cheerleaders from players preying on them." PS it's 2018.

The garbage that cheerleaders face has been a recurring news story for the past few years. In 2014, cheerleaders made national news when a group of current and former Oakland Raiders Raiderettes filed a lawsuit claiming that the team "withholds all pay from the Raiderettes until after the season is completed, does not pay for all hours worked and forces the cheerleaders to pay many of their own business expenses." Their attorney claimed members of the squad earned roughly $1,250 a year, and were responsible for their own "hair, makeup, travel, and photo" costs. Speaking with Salon at the time, one of the plaintiffs explained, "Now that the season’s all said and done, and it’s clear that they knowingly broke the law, I do feel offended and used."

It was soon revealed that other teams offered similarly nauseating arrangements. As the Atlantic reported at the time, "San Diego Chargers cheerleaders get $75 for each home game, along with two game tickets and one parking pass. The Baltimore Ravens Cheerleaders make $100 for each of 10 (mandatory) performances at home games." Meanwhile, teams like the Buffalo Bills were subjecting their cheerleaders to "jiggle tests," advising them how to groom their "intimate areas" and warning them "Do not overeat bread at a formal setting."

The waves of disclosures provoked some temporary public outrage, and in some cases, action. The Raiders swiftly tripled their cheerleaders' pay (granting them a whopping $9 an hour) and eventually settled with the lawsuit plaintiffs for $1.25 million. Several other teams came to similar agreements with their cheerleaders. And after their cheerleaders sued, the Bills stopped using cheerleaders and now features a drumline.

Yet four years later, it's clear that the needle has barely moved. In January, Time reported that "It is unusual for professional cheerleaders to earn more than a few thousand dollars per season, and a typical NFL cheerleader probably averages around $10 or less per hour over the course of a season. Meanwhile, the average NFL player’s annual salary is over $2 million." Many teams also charge potential cheerleaders for the privilege of auditioning.

Since Davis' case was made public, cheerleaders have been coming forward — or as forward as their non-disclosure agreements will permit them to do so without fear of punitive repercussions — about the culture of their profession, one in which women are expected to be simultaneously sexually alluring and available and unrealistically off-limits. Women are still routinely sent out into tailgate parties and private events where, as a former Cowboys cheerleader told the New York Times in April, “We were taught, if someone’s getting handsy on you, how to navigate that. . . . Never be mean. Never. Always courteous. Because if it’s not for the fans, we wouldn’t be here — that’s how we were supposed to think of this.” A Cavs cheerleader recalled, "I remember getting my butt grabbed by a 12-year-old who should’ve been kicked out of the game. For whatever reason, fans think they own you."

It'd be great if now, in our super enlightened #MeToo and #TimesUp era, expecting a woman to vacate a restaurant when a higher ranking male is present would be seen as unreasonable. It'd be nice if an industry that promotes bikini-clad female workers as "hotties" on its own social media would not be appalled at the same women for posting images of themselves similarly attired. And yet the contempt our culture holds for its women runs bone deep — deepest of all for those women whose jobs entail being professionally pleasant and attractive. Cheerleaders are required to be enticing, and then punished for it.

Bailey Davis, whose mother was a choreographer for the Saintsations for 18 years, just wanted to be a part of a team she loved, and to launch her career as a dancer. Now she knows the price of her ambition. "We’re told so many times, ‘There’s a hundred other girls that would do your job for free,'" she told NPR recently. "You’re just taught to keep your mouth shut or they’d replace you. So I think when you’re in the organization, you don’t realize that there’s nothing okay about this.”