WATCH: Republican Gov. Kay Ivey blasts "out-of-state liberals" who "try to change or erase or tear down our history 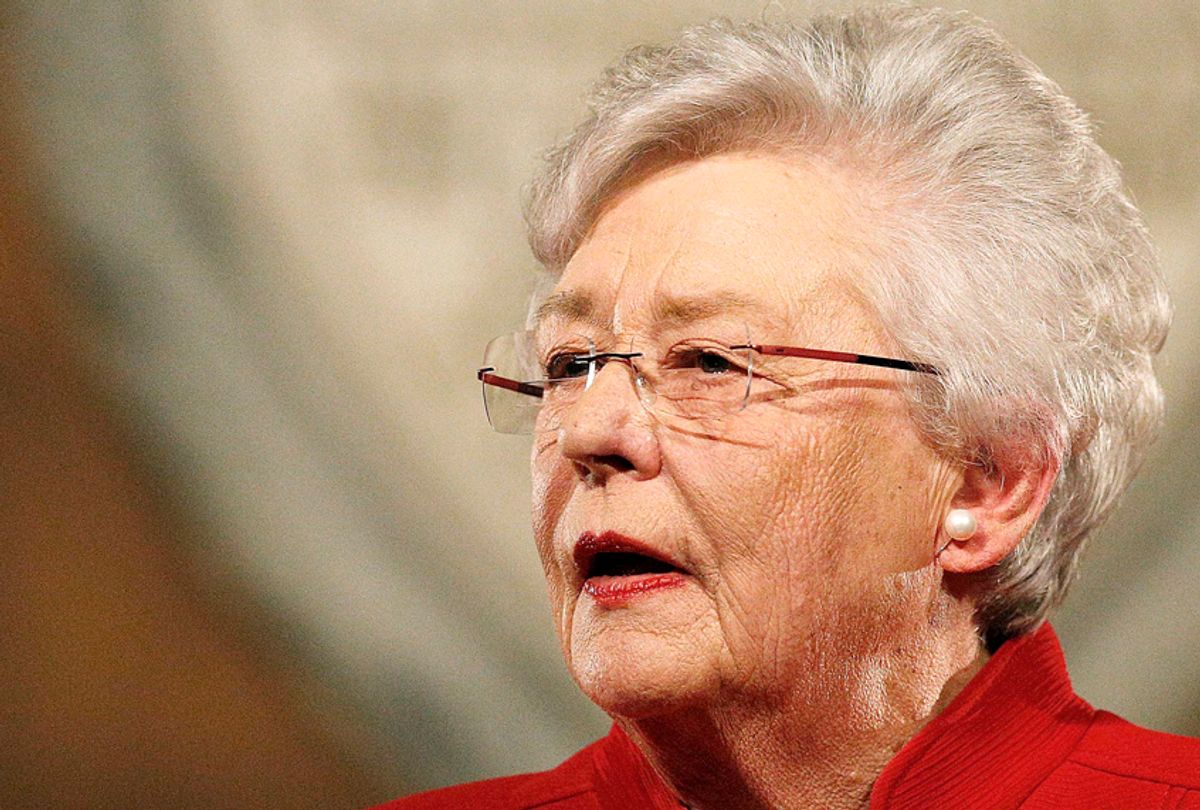 Some of the former Confederacy states are not the least bit interested in getting rid of their beloved Confederate monuments, and, as a new campaign ad from Alabama's Republican governor shows, it appears that outside opinions aren't welcome either.

"We can't and shouldn't even try to change or erase or tear down our history," Gov. Kay Ivey said at a rally for her re-elect campaign on Tuesday, according to AL.com. She went on to blast "folks in Washington" and "out-of-state liberals" who attempt to get rid of Confederate monuments.

In a campaign advertisement released on Tuesday, Ivey boasted about a piece of legislation she signed last year, which was called the "Alabama Memorial Preservation Act of 2017" and prevented local governments from taking down public monuments that have been up for 40 years or more, AL.com reported.

"Up in Washington, they always know better," Ivey said in the newly released ad. "Politically correct nonsense, I say."

She closed, "We can’t change or erase our history, but here in Alabama, we know something Washington doesn’t — to get where we’re going means understanding where we’ve been."

Ivey's campaign in support of Confederate monuments comes as conservative lawmakers in Tennessee have made efforts to punish the city of Memphis after it removed the statues of Confederate General Nathan Bedford Forrest and Confederate President Jefferson Davis.

On Tuesday the Tennessee House of Representatives successfully voted on an amendment to the state's budget that strips Memphis of $250,000 it was due to receive "for the sole purpose of costs associated with municipal bicentennial celebrations."

Last year, the city of Memphis found a loophole in state laws that protected the monuments and sold city parks to a nonprofit organization. The nonprofit, Memphis Greenspace, proceeded to quickly remove the two statues, angering Republican legislators.

But Democratic lawmakers in Memphis say the amendment is "hateful," according to Nashville Public Radio. "This amendment and the explanation, it is hateful, it is unkind, it is unchristian-like and it is unfair, OK?" Democrat Raumesh Akbari said.

She added, "Memphis is a city in this state, and I am sick of people in this house acting like it is not."

One Republican stood by his decision and said the bicentennial funds should be withheld because the law was circumvented.

"I think the city of Memphis, like any other city in the nation, needs to if not obey the law, at least obey the spirit of the law," Rep. Gerald McCormick of Chattanooga said, according to Nashville Public Radio. "The law was very clear, and they got smart lawyers to figure out how to wiggle around the law."

It appears as if Republicans could be making a push to turn Confederate monuments into a contentious issue for the 2018 midterms. Numbers have been on their side, as a poll from last August indicated that 54 percent of Americans believed should remain in public spaces, while only 27 percent said they should be removed and 19 percent weren't sure.