Tammie Jo Shults: Meet the pilot with "nerves of steel" who guided the Southwest plane to safety

"This is a true American Hero," Southwest Flight 1380 passenger Diana McBride Self wrote of the pilot on Facebook 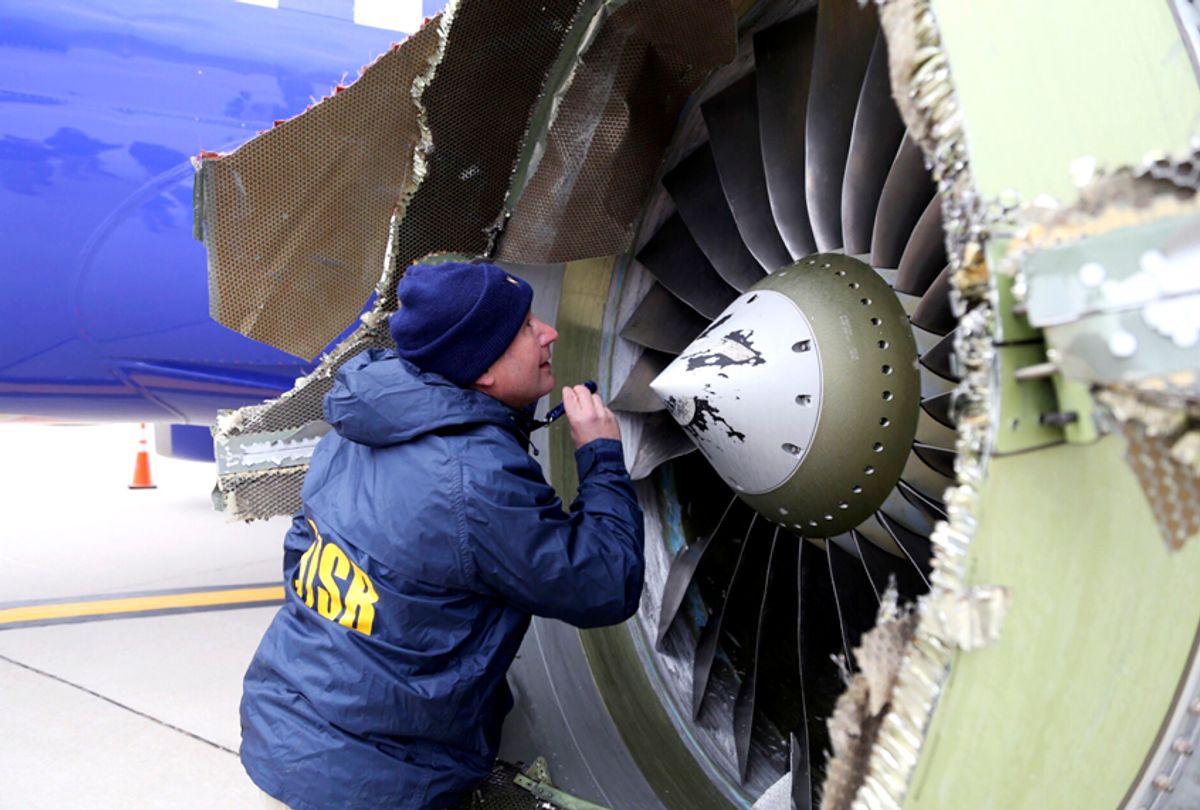 The damaged engine of the Southwest Airlines plane that Tammie Jo Shults landed in an emergency landing at Philadelphia International Airport. (NTSB via AP)
--

Southwest Flight 1380 left New York for Dallas Tuesday, and 20 minutes later, passengers said they heard what sounded like explosions. At 32,000 feet, an engine failure explosion sprayed shrapnel inside the plane and smashed a window midair. A female passenger was being sucked out of the cabin. Oxygen masks dropped, and panic crept throughout the air craft. But pilot Tammie Jo Shults remained calm and professional while guiding the plane of more than 140 passengers to an emergency landing in Philadelphia.

Authorities said the female passenger died at a Philadelphia hospital, while seven other passengers suffered minor injuries. But many on the plane acknowledged the work and composure of Shults in preventing what could have been further catastrophe.

Shults is one of the Navy's first female fighter pilots and among the first women to fly the combat jet, F/A-18. Audio from her communications with air control shows an unwavering voice in the face of grave danger.

"We have a part of the aircraft missing," Shults said and requested that medics meet the plane on the runway to attend to injured passengers.

"Injured passengers, OK," Air traffic control responded. "And is your airplane physically on fire?"
"No, it's not on fire," Schults replied. "But part of it is missing. They said there's a hole, and that someone went out."

"She has nerves of steel," passenger Alfred Tumlinson told the Associated Press. "That lady, I applaud her. I’m going to send her a Christmas card — I’m going to tell you that — with a gift certificate for getting me on the ground. She was awesome."

Passenger Diana McBride Self said Shults "came back to speak to each of us personally" after the successful landing and McBride thanked her for her "guidance and bravery in a traumatic situation," on Facebook. "This is a true American Hero," she wrote.

"We were very lucky to have such a skilled pilot and crew to see us through it," passenger Eric Zilbert told the Kansas City Star. "The plane was steady as a rock after it happened. I didn't have any fearing that it was out of control."
Shults' interest in aviation began early, according to the book "Military Fly Moms" by Linda Maloney, the Washington Post reports. She grew up on a New Mexico ranch, close to Holloman Air Force Base. Shults said she knew she "just had to fly." But the industry was not receptive to female pilots, and she was often told there were "no professional women pilots."
The Air Force "wasn't interested" in her, Shults said. But she "set to work trying to break into the club," and the Navy let her apply. She served in the Navy for a decade, breaking barriers and rising to the rank of lieutenant commander. Cindy Foster, one of Shults' friends from college, told the Kansas City Star that Shults "had to work harder than everyone else. She did it for herself and all women fighting for a chance."
On Twitter, Americans are now hailing Shults as a national hero. The National Transportation Safety Board said there hadn't been a passenger fatality in a U.S. airline accident since 2009. The passenger who died was identified as Jennifer Riordan by her employer Wells Fargo in Albuquerque.

So we have a new Sully: Tammie Jo Shults

"Everyone clapped and praised the pilot after he set the aircraft down." The pilot is Tammie Jo Shults, one of the Navy's first female fighter pilots and the first woman to fly the F/A-18. Come on.https://t.co/GFiQ5pKvrV

One of the passengers described the landing as smooth. Amazing. https://t.co/y98V8rl9LH

Mind blowing. What a level-headed and we’ll-trained pilot. Good job on her!

Brilliant! And she’s super cool and calm on the com with air traffic. https://t.co/u6rVNluCBd

Hero is the word to describe the pilot https://t.co/o9G6WvQRVq

Thank you pilot Tammie Shults for handling and safely landing the @SouthwestAir plane today. My nephew was on that flight and he is safe because of the skills of you and crew. https://t.co/j5Oh22vYh1

It was not all that long ago when most people thought women could not do this. Many believed women could not handle the pressure. Those people were wrong and this woman is a hero. https://t.co/dPj5tdu1SP