Trump nominee's refusal to back Brown v. Board is part of a larger right-wing attack on educational equality 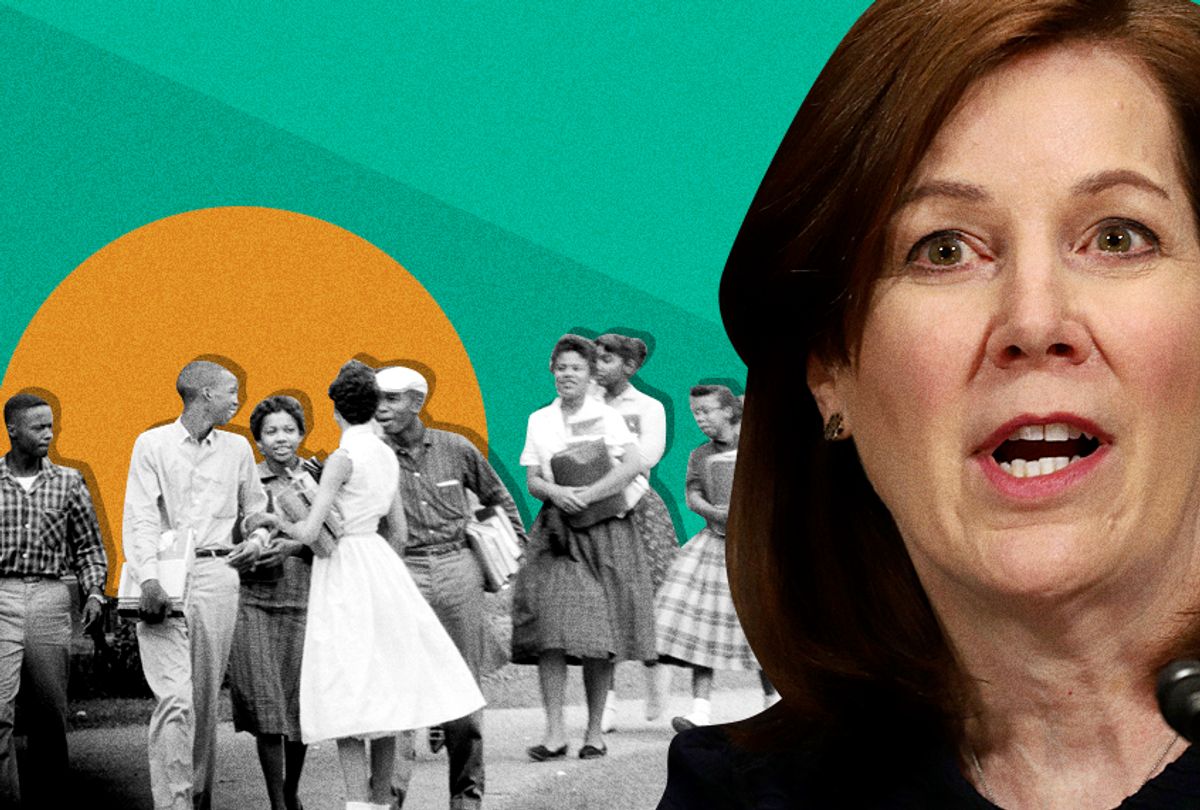 "I don't mean to be coy," Vitter said when asked about it by Sen. Richard Blumenthal, D-Conn., "but I think I can get into a difficult, difficult area when I start commenting on Supreme Court decisions -- which are correctly decided and which I may disagree with."

As is standard these days, the comment set off a firestorm of debate over whether or not Vitter was "really" being racist.

“It is shocking that, in the year 2018, Ms. Vitter refused to say whether the Supreme Court, a unanimous Supreme Court, did the right thing when it struck down segregation and legal apartheid in America’s schools," Kristine Lucius of the Leadership Conference said in a Monday press call.

NAACP head Derrick Johnson, during the same call, said that Vitter had joined "a growing roster of Trump nominees" who exhibit "documented hostility regarding the rights of communities of color."

Tim Morris of NOLA.com disagreed with that analysis, saying that Blumenthal "was trying to set a trap by coaxing Vitter to comment on one Supreme Court ruling that would then open the door to the case he really wanted to get to, the abortion rights the court found in Roe v. Wade.

"Did Blumenthal have any reason to believe that Vitter disagreed with the court ruling or that she would be looking to overturn 64 years of precedent by deciding that 'separate but equal' was constitutional?" Morris asked.

Morris' readers are clearly invited to believe that it's preposterous to suggest that a conservative Republican from the South would oppose desegregation. It's not. Vitter has already been exposed as holding radical opinions on other matters, such as her endorsement of the belief that birth control, something nearly all women have used, is dangerous and unnatural.

But the far grimmer truth is that school desegregation is not nearly as uncontroversial as Morris would have his readers believe. In many ways, racial discrimination in public schools is alive and well. While most people would formally agree that Brown v. Board was correctly decided, in practice American schools are still segregated by race, and in many places black students are treated as second-class citizens.

"America's school-age population is more diverse than ever before, reflecting the demographic shift rapidly taking place in our country," wrote Beverly Daniel Tatum in a Los Angeles Times op-ed last September. "America's schools, however, are more segregated than they have been for decades."

In a 2014 report for the 60th anniversary of Brown v. Board, the UCLA Civil Rights Project found that in the 11 Southern states that had their segregation laws overturned by the Brown decision, there has been a strong decline in integration after the Justice Department of the Reagan and George H.W. Bush years undermined desegregation efforts and the Supreme Court terminated desegregation orders in 1991.

"At the peak, 44% of black southern students were in majority-white schools, the kind of schools that provided strong potential opportunities for diverse learning experiences," the report reads. "By 2011, that number had declined to 23%, a drop by nearly half, and the decline has accelerated in recent years."

White parental choices help accelerate these trends. “New Orleans has a relatively diverse city population, but white parents in New Orleans disproportionately send their kids to private schools," Jon Valant of the Brookings Institution told Salon. "So the public school system looks very different, demographically, from the city as a whole." Tulane's Education Research Alliance for New Orleans released a study last year demonstrating that efforts to overhaul the education system in the city after Hurricane Katrina did little to reverse this trend.

As Nikole Hannah-Jones reported in 2014 for ProPublica, 12 percent of black students in the South now attend what are deemed "apartheid schools," where less than 1 percent of the school's population is white. That problem isn't limited to the South. ProPublica tracked a similar surge in segregation in Midwestern swing states like Ohio and coastal blue states like New York and California as well.

Even when schools are technically integrated, black students often face discrimination. Many schools use "tracking" systems that function as an intra-school method of segregation. While such systems are ostensibly merit-based, channeling high-achieving kids into more challenging classes, in practice they often have discriminatory effects.

"Parents who are able to secure high-track placement for their children are disproportionately likely to be white, well-educated and politically vocal," a 2013 report from the National Education Policy Center at the University of Colorado explains. These parents use the system to keep their children "apart from students of lower wealth, students of color, or both." That report also shows that there's no real evidence that tracking improves educational outcomes, but it does exacerbate inequality.

Then there's the unequal treatment students experience on a daily basis in schools, especially when it comes to discipline. As Valant of Brookings argues, although it's difficult to get rigorous data that isolates the effects of racial discrimination in school discipline, there is "reason to worry that students of color are being punished too harshly in many schools across the country."

Valant was part of a team at the Education Research Alliance for New Orleans that found large disparities in disciplinary actions at Louisiana schools, with black students twice as likely to be suspended as white students. They looked specifically at discipline in cases where white and black student got into fights with each other, and found clear disparities.

"For fights involving one white student and one black student, black students receive slightly longer suspensions than white students," the report reads. "This disparity is evident even after accounting for students’ prior discipline records, background characteristics, and school attended."

All of this means it's not preposterous at all to wonder why Vitter was so hesitant to agree that Brown v. Board of Education was a good decision. In many ways, subtle and otherwise, many white people in America have resisted school desegregation every step of the way. That resistance remains strong, even if it's not expressed as overtly as it once was. As long as Donald Trump is in the White House, there's no reason to believe this situation will improve.