Kevin McCarthy wants to replace Paul Ryan: Will the far right stop him once again?

So far Republicans have avoided open warfare over who succeeds Paul Ryan. They all fear the answer is Nancy Pelosi 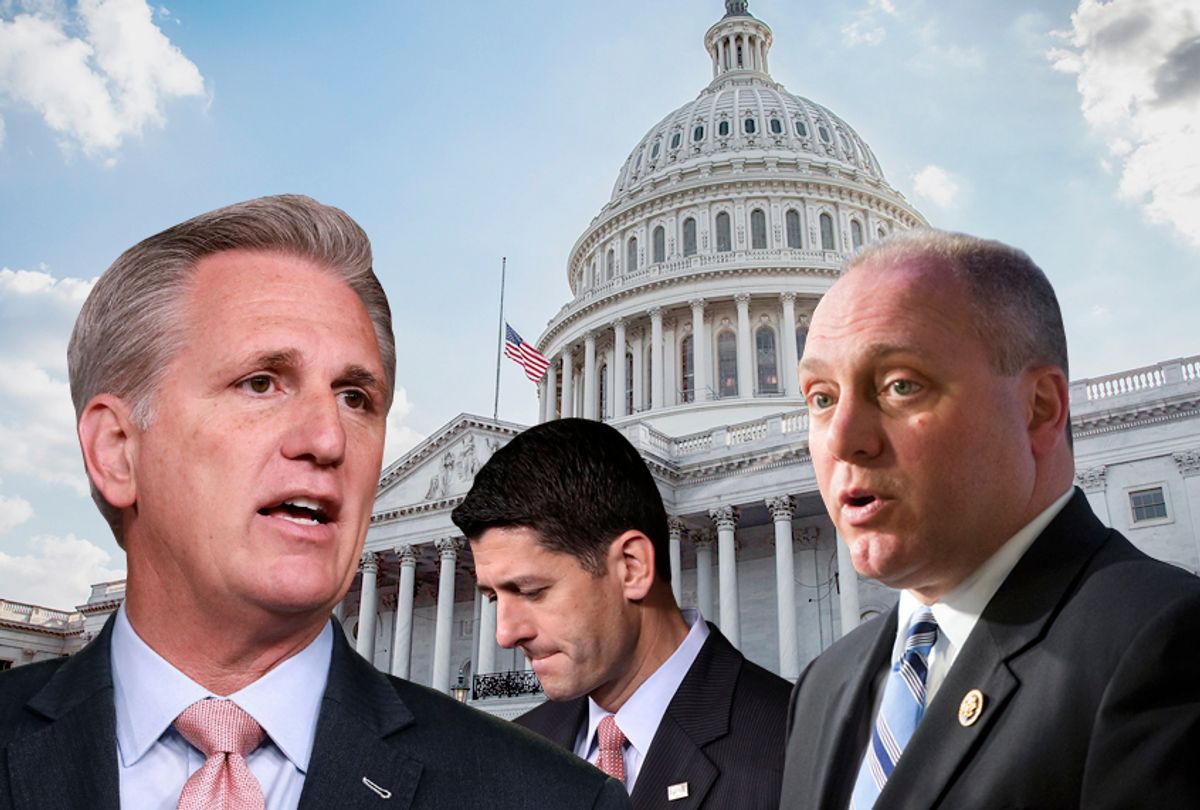 Paul Ryan was uninterested in becoming speaker of the House of Representatives when his fellow Republicans drafted him for the position in 2015. He was wise to be wary, considering how John Boehner, the man who preceded him in the role, was hounded from office by the far-right zealots of the House Freedom Caucus.

Less than three years later, in the wake of Ryan's announcement that he won't run for re-election to Congress, the GOP has no shortage of speaker-wannabes. That's so even though the job has only gotten harder of late, thanks to the perpetual turmoil that exudes daily from the White House. An ongoing and unresolved tension between conservative anti-government ideology and the responsibilities of the federal law-making apparatus will make the task even more difficult.

Whoever ends up replacing Ryan will have to prevail in what shapes up to be several months of a grueling but unofficial campaign, which really began even before Ryan announced on April 11 that he would retire from congressional politics, but would remain as speaker until his term ends early next year.

While there are only 36 or so Freedom Caucus members out of 246 House Republicans, the small group has an inordinate amount of leverage over who becomes speaker. This stems from simple arithmetic: The speaker must be elected by the entire Congress. So whichever party holds a majority must iron out its differences ahead of time and vote as a bloc, since the minority party can be counted on to oppose that person.

As in 2015, Majority Leader Kevin McCarthy of California is once again seeking the speakership, after previously being denied it at the hands of Freedom Caucus members. They saw McCarthy as too moderate because he joined Boehner in opposing far-right Republicans’ efforts to shut down the government in 2013, in their vain attempt to stop much of the Affordable Care Act from being implemented.

Just as Boehner did before him, Ryan is trying to rally his troops behind McCarthy, now the second-highest ranking Republican. He’s formally endorsed the Californian and has succeeded in pressuring the party’s third-in-command, Majority Whip Steve Scalise, of Louisiana, to let McCarthy try to muster up the votes for himself.

Despite that pledge, it's worth noting that there is no official race, since Ryan has made clear that he won't relinquish the speaker’s chair until next January, so Scalise could campaign unofficially as much as he wants. To this point, the GOP whip has only pledged not to oppose McCarthy -- unless the latter is unable to get the necessary number of votes.

A protracted intra-GOP succession battle is something that most Republican members want to avoid. Some of McCarthy’s allies have been particularly vocal about trying to make the conflict as short as possible.

“I think there’s a lot of goodwill for Paul Ryan, but I don’t know if there’s so much goodwill that they’ll let him stay as speaker,” said Rep. Joe Barton, R-Texas, a veteran member who is also retiring at the end of this term, in an interview last week. “I think nobody would have a problem if he resigned the speakership and stayed in Congress to fulfill a commitment to his constituents in Wisconsin.”

Other Republicans are upset that the GOP is preparing to battle over the speakership, considering the strong possibility that Democrats will win control of the House in the midterm elections this fall. If that happens, Minority Leader Rep. Nancy Pelosi, D-Calif., will once again become speaker, a prospect most Republicans dread.

“If we’re not going to have control of the House of Representatives, then why even bother with this internal fight that could result in schisms and hurt feelings and making it more difficult for us to prevail in November?” Alabama Rep. Mo Brooks, a member of the Freedom Caucus, told Roll Call.

A shorter race would seem to work to McCarthy’s benefit, since several Freedom Caucus members are pledging to withhold their support unless he offers concessions to them. Others are promoting the so-far-hypothetical candidacy of one of their own, Rep. Jim Jordan of Ohio.

Even before Ryan’s announcement, McCarthy had become far more solicitous toward far-right Republicans by helping them raise money for their re-election campaigns. He has also gestured toward supporting the Freedom Caucus members' plans to slash federal spending, although they invariably get rejected by the Senate or never even reach a floor vote.

One possible wild card in the Ryan succession battle is the ever-unpredictable Donald Trump. McCarthy was one of Trump’s earliest congressional supporters in 2016, when most GOP elites were fearful of endorsing a rookie candidate who had already enveloped himself in controversy. Since Trump's inauguration, McCarthy has assiduously flattered the president both in public and in private. That has evidently paid off: Trump has even given McCarthy a nickname, “My Kevin,” reminiscent of the time he referred to a black supporter in a speech as “My African-American.”

Thus far, Trump has made no endorsement in the speakership contest. While he frequently ignores his advisers’ counsel, several high-level administration officials are reportedly urging him to be cautious about any such intervention. Vice President Mike Pence has the added motivation that he has been close to Scalise for years; both come from the GOP’s Christian-right wing.

As with so much of the Trump presidency, expect the struggle to replace Ryan to play out on Fox News, which Trump is said to watch for multiple hours every day. Last Wednesday, the day of Ryan’s announcement, Scalise managed to score a quick hit on “Fox & Friends,” the network’s reliably Republican morning show. McCarthy was on the next day. Both were full of praise for the president and avoided talking any policy specifics.

To this point, the battle to succeed Paul Ryan has remained on the sunny side, at least in public. As it goes on, especially if defeat in November looks likely, expect the GOP's darker internal divisions to come to the fore.