Lock them up! GOP goes full banana-republic with demands to jail Comey, McCabe and Clinton 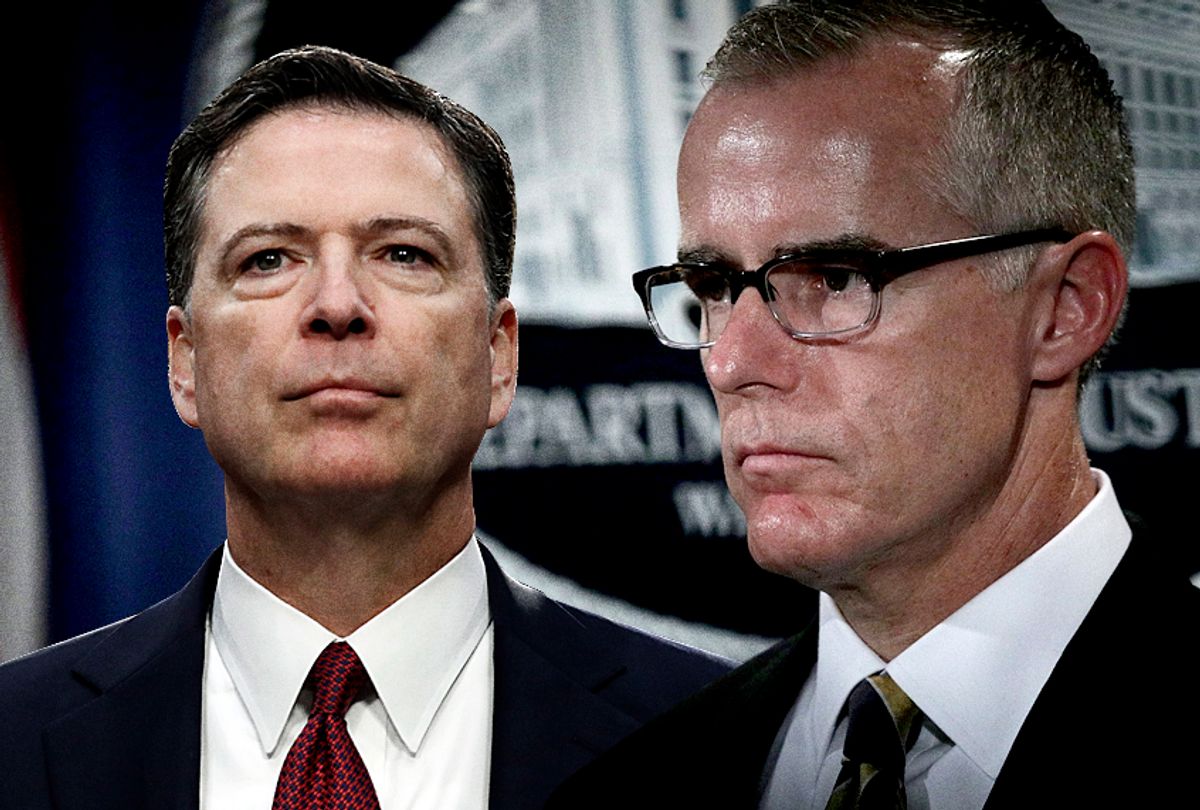 If I had read this opening paragraph of a CNN story four years ago I would have assumed it was actually an excerpt from a bad movie script:

A week after the tell-all book from James Comey exploded onto the scene, President Donald Trump is telling aides and confidants something he rarely does: He's pleased at how Republicans and the White House led the charge to try and discredit the former FBI director.

Setting aside the ridiculous notion of Donald Trump being president, I would have said the stuff about the White House and Republicans openly celebrating a campaign to discredit an FBI director, much less a stalwart Republican like Comey, would be absurd and no one would believe it. They were the "law and order" party. They love FBI directors.

There's no need to belabor this little time-travel exercise. It's just that sometimes you have to acknowledge the strangeness of what's going on. This is just one small example, but it's a significant one. The president and his minions in the media and, more significantly, in the Congress are working overtime to discredit witnesses in a counterintelligence investigation involving ... the president. And they are bragging about their success to the news media.

On Thursday night the Department of Justice finally relented and released the long-sought "Comey memos," which the former FBI director had written to document his meetings with Trump and other members of the White House during those first few months of the Trump administration. Just like the infamous "Nunes memo," they are basically duds as far as new information is concerned. This should come as no surprise: Comey testified at length before Congress and wrote a book about all this that he's currently appearing on every TV show in the known world to promote. Apparently, Trump's allies hoped or believed these would prove Comey was lying and instead they have now proved to everyone that he wasn't. They're reduced to making absurd observations that Comey never once wrote that he "felt obstructed."

Still, it was a thrilling day for Trump. His Justice Department referred former Deputy FBI Director Andrew McCabe to the U.S. attorney for the District of Columbia for possible criminal charges. Finally, one of his perceived political enemies was getting what was coming to him.

McCabe was referred on the basis of the FBI inspector general's report finding that he had shown a "lack of candor" about an unauthorized leak to the Wall Street Journal confirming that the FBI was still investigating the Clinton Foundation. You'll recall that McCabe was fired in a highly unorthodox fashion for this infraction, just hours before he was to officially retire and weeks before the report was released in full.

According to former FBI counter-intelligence official Frank Figliuzzi, who recently discussed all this on MSNBC's "Deadline: White House," this referral is unusual:

If it is true that the charge that is being referred is for a lack of candor during an internal inquiry, I cannot recall that ever happening in my 25-year FBI career. I also headed the office of professional responsibility adjudication unit. I was the chief inspector of the FBI during my career and that's a new one on me. So, what I was thinking is that the referral would be for an unauthorized leak -- that McCabe actually conceded that he did allow his subordinates to talk to the media and disclosed the existence of a case. That sounded more prosecutable than lacking candor during an internal inquiry. I don't know if he was under oath or not, but nonetheless the remedy for that is termination not criminal referral. So I'm troubled by this, if the reporting is correct.

James Comey told Rachel Maddow on Thursday night that there were two people in the FBI who had authorization to provide such information to the media at the time: Himself and Andrew McCabe. So a criminal referral on that count would seem to be odd as well.

It appears that McCabe is facing potential criminal indictment for a so-called crime not easily found in the statute books ("lack of candor") or over a leak he was specifically authorized to make. This is not the end of this story.

According to the Washington Post, the president is not satisfied:

Although White House officials said Thursday that Trump has not called Justice Department officials or taken any formal action, the persistent grousing has made some advisers anxious, according to two people close to the president.

He doesn't have to call Justice officials. They are well aware of his demand to lock up Hillary Clinton for crimes that exist only in his head, and he has said that McCabe is a criminal many times. Surely they read his Twitter feed:

The right-wing media, led by unofficial White House chief of staff Sean Hannity, have been calling for indictments of the president's enemies for months. Now he has some congressional back-up for this authoritarian, banana-republic command. Eleven members of the House have called on Attorney General Jeff Sessions and FBI Director Christopher Wray to launch criminal investigations into Clinton, Comey, former Attorney General Loretta Lynch, former Acting Attorney General Sally Yates, McCabe, former acting Deputy Attorney General Dana Boente and FBI employees Peter Strzok and Lisa Page for a variety of different and unaffiliated alleged crimes. If it weren't for the fact that McCabe has actually been referred for possible indictment already I'd say all of that was nuts.

I hate to give James Comey the last word, but this is what he said during an NPR interview this week after President Trump called for him to be sent to prison:

The president of the United States just said that a private citizen should be jailed. And I think the reaction of most of us was, “Meh, that’s another one of those things.” This is not normal. This is not OK. There’s a danger that we will become numb to it, and we will stop noticing the threats to our norms. The threats to the rule of law and the threats most of all to the truth. And so the reason I’m talking in terms of morality is, those are the things that matter most to this country. And there’s a great danger we’ll be numbed into forgetting that, and then only a fool would be consoled by some policy victory.