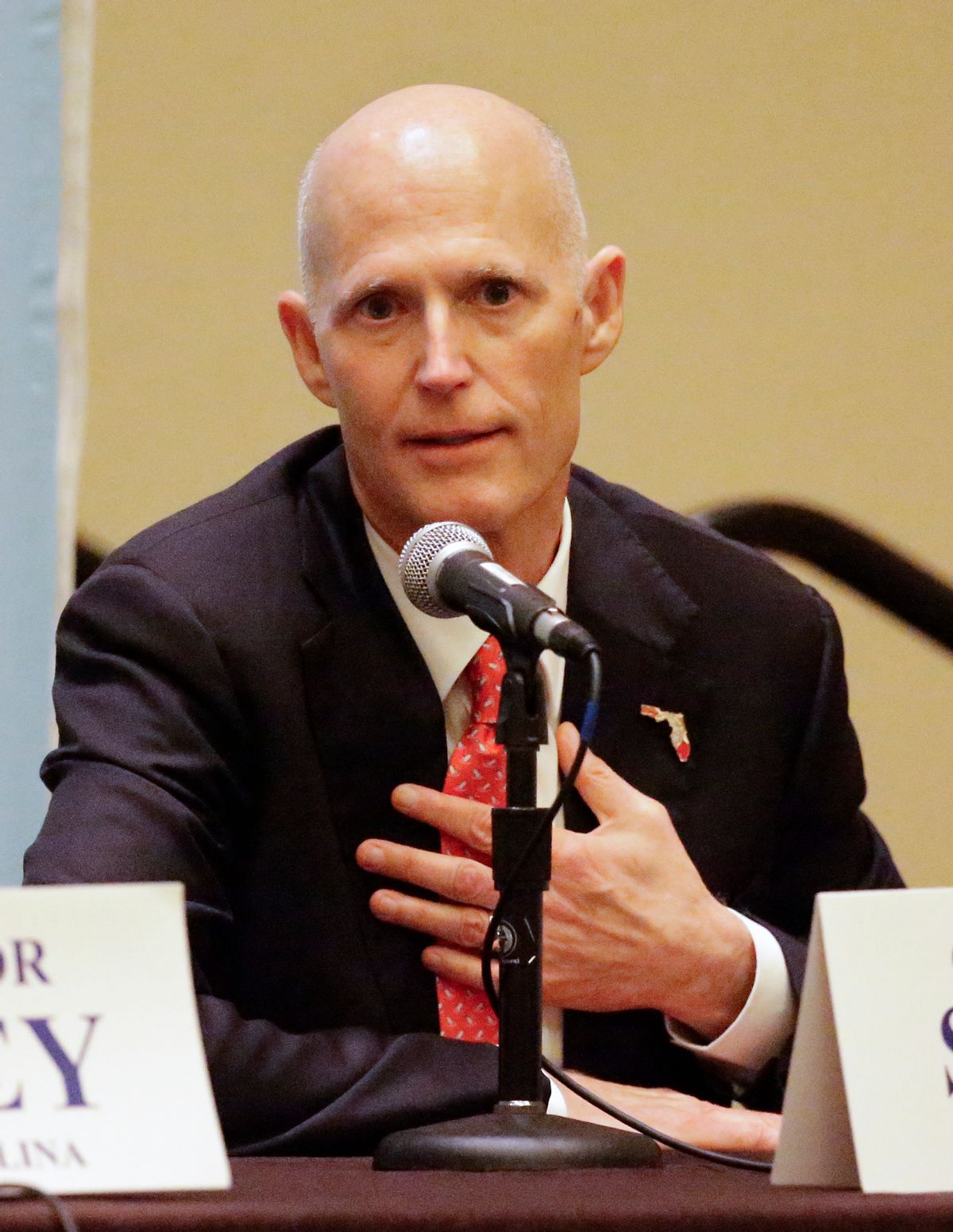 The donations were made to a committee that’s now supporting Scott’s U.S. Senate bid, despite a federal rule designed to prevent financial firms from bankrolling the election campaigns of public officials who oversee state pension investments.

Scott, a Republican, began chairing the New Republican PAC in May 2017 and announced his former campaign manager would serve as its executive director. Soon after, the group received $5,000 from New Mountain Capital Chief Executive Officer Steve Klinsky and $50,000 from Energy Capital Partners founder Douglas Kimmelman.

The contributions flowed to the super PAC after New Mountain Capital and Energy Capital Partners received a combined $250 million worth of new investment commitments from Florida’s state pension system in 2014 and 2015. Scott is one of three state officials who oversee the $160 billion pension system. During the most recent fiscal year, the Florida investments generated more than $3 million in fees for the firms.

But the commission didn’t explicitly bar donations to “independent” political groups, unless the donations were deliberately designed to circumvent the restrictions. And it hasn’t addressed whether a state official can lead a super PAC that received donations from firms with pension business and later be supported by the super PAC.

John Kuczwanski, a spokesperson for the Florida State Board of Administration, told MapLight/Capital & Main that Florida’s first investments in the two private equity firms happened in 2005 and 2009, and he said Scott had nothing to do with new investments during his governorship, which started in 2011.

“The [state’s] initial relationships with both managers predate Governor Scott’s time in office,” said Kuczwanski, whose agency manages the day-to-day operations of the pension system. “Neither the trustees, nor their appointed investment advisory council members are involved in the investment manager/fund selection process.”

Scott’s campaign and the super PAC did not respond to questions from MapLight/Capital & Main. New Mountain Capital and Energy Capital Partners did not return requests for comment.

Energy Capital recently completed the purchase of Calpine, whose natural gas power plant near Tampa is regulated by Scott’s appointees at the Florida Public Service Commission. Kimmelman, who is now a director of Calpine, also donated$35,000 in 2017 to the National Republican Senatorial Committee, which is backingScott’s Senate campaign.

Under the SEC rule — which GOP state parties have tried to overturn — investment executives are not prohibited from donating to independent political groups. But the rule allows regulators to apply restrictions to donations that are deliberately routed through third parties in order to support public officials — a situation that critics argue is happening with Scott and his super PAC.

In writing the original rule, SEC officials noted that while they could not restrict all donations to political action committees, contributions to third parties “may effectively operate as a funnel to the campaigns of the government officials.” They said the final rule “prohibits acts done indirectly, which, if done directly, would violate the rule.”

One ethics expert said that those anti-circumvention provisions should apply to the donations to Scott’s super PAC.

“This appears to be a very clear case of close coordination and circumvention of the pay-to-play rule,” said Craig Holman, an ethics lobbyist at the government watchdog group Public Citizen. “This is something that I’d like the SEC to pay attention to.”

The SEC has only occasionally enforced the pay-to-play rule, and the agency hasn’t applied the provisions dealing with third parties to donations to super PACs. Because Scott is a sitting governor who can influence pension investments, he is covered by the rule, which has hampered the fundraising of past governors who tried to run for federal office.

A spokesman for former Texas Gov. Rick Perry’s presidential campaign said the rule prevented him from raising enough money to be competitive in the 2012 race. Bloomberg reported that during the same election cycle, then-New Jersey Gov. Chris Christie was rejected as the vice presidential nominee, partly because Republicans feared the rule would prevent them from raising money from Wall Street firms that do business with his state’s pension system.

“There is no way around it, and there are no loopholes,” said Bill Palatucci, Christie’s longtime advisor.

Even so, in recent years the rule has not deterred financial executives from donating to groups that help lawmakers who can influence pension investments. Financial executives whose firms received New Jersey and New Mexico investments continued to donate to the Republican Governors Association (RGA) when Christieand New Mexico Gov. Susana Martinez led the group. During the 2016 election cycle, executives at firms managing state pension money donated nearly $1.3 million to the GOP association, even as the group boosted the campaigns of Republican governors with power over state pension investments.

Last year, U.S. Sen. Tom Udall, D-N.M., called for the SEC to apply the pay-to-play rule to outside groups “to ensure that no one is able to circumvent these laws by using super PACs, dark money groups or other campaign spending vehicles.” The RGA has argued that because it funds multiple candidates and does not allow donors to earmark contributions for particular races, it can accept donations from firms with investment business that can be influenced by individual governors. The SEC said in 2016 that donations to outside political groups “are independent expenditures that do not trigger” the rule.

“So long as the PAC faithfully observes the requirement to operate independently of candidates, a contribution to a super PAC will not trigger the [rule], even if the super PAC supports a covered official,” Sam Brown, a former advisor to Federal Election Commissioner Ellen Weintraub, wrote in 2016. “Super PACs are increasingly being used in novel ways, and it remains to be seen whether these changes will result in increased circumvention risks.”

This story is a collaboration between MapLight and Capital & Main.