West Virginia showed how necessary — and difficult — striking is

“It was exhilarating and exhausting. You start thinking, ‘Are we going to be out forever?’” 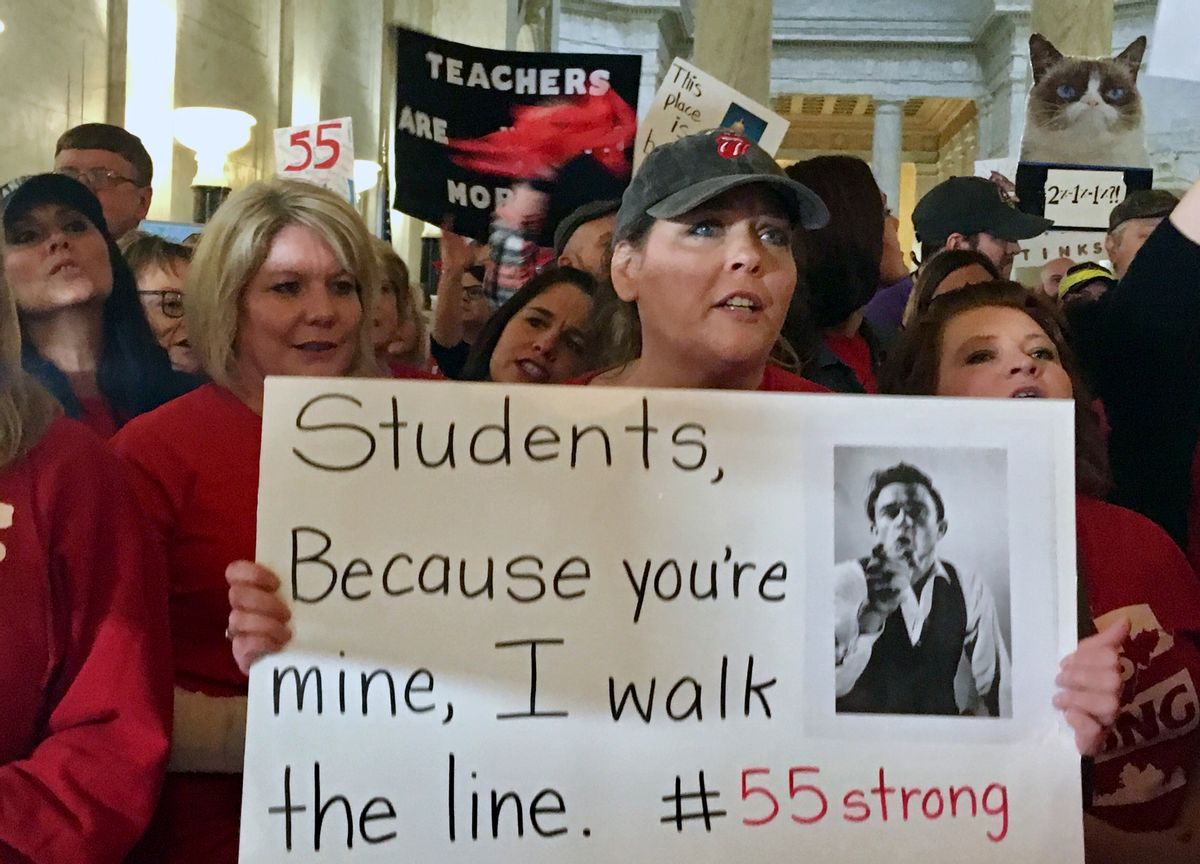 After nine days of arriving at 7 a.m. to the picket lines, Emily Comer, a Spanish teacher at South Charleston High School, was “mentally and emotionally and physically exhausted.”

Word came on a Tuesday morning that a deal between the state and the striking public employees was imminent. Comer — sick in bed with a cold — got dressed and went to the Capitol atrium, thinking, “I cannot not be there.”

When Republican Gov. Jim Justice announced the state had agreed to a 5 percent raise, Comer recalls, “I was bawling. People were hugging each other and crying. People were singing ‘[Take Me Home] Country Roads.’”

From February 22 to March 6, West Virginia public employees — led by teachers and school support staff — held one of the biggest work actions in recent U.S. history, rebuffing austerity and, at points, even the wishes of their union leaders.

One trigger was rising healthcare costs. For teachers, the strength of their i nsu ra nce plan, administered by the Public Employee Insurance Agency (PEIA), served as a trade-off for the fourth-lowest teacher salaries in the nation. But over the last several years, public employees saw more and more of their paychecks diverted into health insurance costs.

Comer’s father was a state trooper, and she has been on PEIA her whole life. “It used to be great,” Comer says, “and still, compared to private health insurance, it is. It just keeps getting more expensive every year.”

Momentum for the strike began building in the fall, when the PEIA board of directors held a series of hearings around the state that drew raucous public commentary. Increasingly dissatisfied teachers flooded into a private Facebook page called “West Virginia Public Employees United.” At first, it was a place to vent. Soon, it became a hub for coordinating statewide actions like letter writing. Before long, public employees began tentatively discussing the possibility of a sustained statewide walkout.

“People were calling it ‘the S-word,’ ” Comer recalls. It was at a rally at the Capitol on Martin Luther King Day that she realized the S-word might become reality. West Virginia Education Association president Dale Lee took the mic and, Comer remembers, “He actually said the word: strike.”

They had good reason. On February 2, teachers in three counties would stage a oneday walkout. By the end of the month, schools in all 55 counties were closed for the strike.

In Comer’s district, strikers were out at dawn holding signs along the highways. Then they’d head to the Capitol to chant and lobby legislators.

“I worked longer days on strike than we do at school,” Comer says. “It was exhilarating and exhausting. You start thinking, ‘Are we going to be out forever?’ But I knew that I was not about to give up and would have stayed out as long as needed.”

Three days in, Justice and union leaders announced a deal on a raise — but not on PEIA. Teachers rebelled, staying off the job in a wildcat strike.

The final deal looks an awful lot like victory: a 5 percent pay raise, as opposed to the 1 percent raise Justice had proposed before the strike, and the creation of a statewide task force to determine PEIA’s future.

How to fund PEIA will be hotly debated in the coming months by the task force, which is composed of union officials, policymakers and insurance industry reps. Teachers want a bigger severance tax on coal and natural gas companies. Conservative lawmakers are threatening to pull the funds from Medicaid.

“They’re trying to divide public employees against the rest of the working class,” Comer says of the lawmakers. “I just don’t think it’s going to work.”

Whatever happens, the West Virginia public employees have shaken up the nation. At press time, Oklahoma teachers were gearing up for their own strike. With the U.S. Supreme Court poised to make every state a socalled right-to-work state like West Virginia, public employees there have shown that a lack of formal recognition doesn’t mean a lack of power.