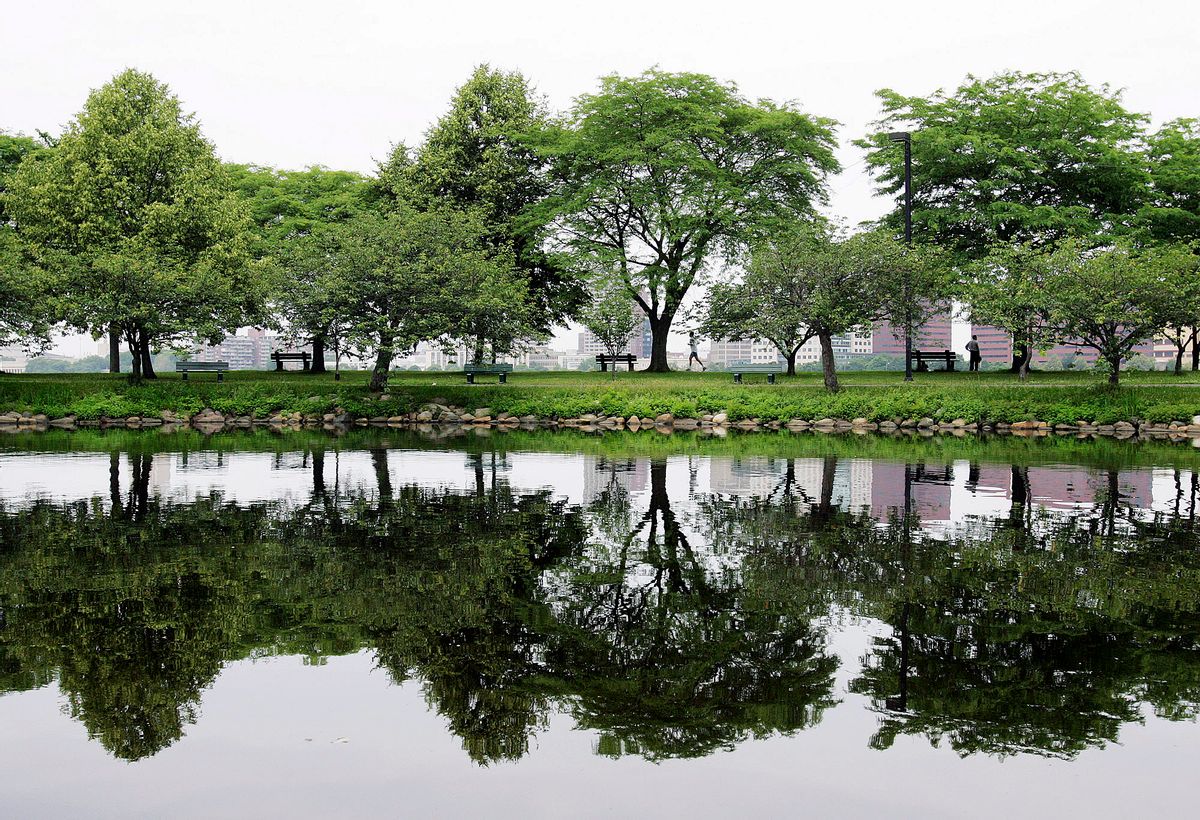 For nearly 50 years, Earth Day has provided an opportunity for people across the globe to come together and rally in support of the natural world. While the specific challenges have varied, the goal has remained more or less the same: to protect the rich, biological world that the current generation has inherited from being overwhelmed by the influences of humanity.

While there have been many notable successes since this day of celebration began in 1970, the overall trajectory has not been uplifting.

Today you can travel to the furthest part of the Arctic Ocean, to the highest point of the Caucasus Mountains, to the remotest spot in the Australian outback and find the unmistakable signs of human activity. Chemical and industrial traces are now present in every pinch of soil and every drop of water. Transported by high-altitude atmospheric winds, millennia-old patterns of precipitation, and the tire treads of fossil-fuel-powered vehicles, the imprints of humanity reach all corners of Earth.

These kinds of global impacts demand a fundamental shift in the relationship between humans and the surrounding world. Despite the efforts of those who have marched passionately and religiously on Earth Day, we live in the age when “pristine nature” has permanently blinked out of existence.

Many are suggesting that humanity should mark this moment by declaring that the planet has entered the new epoch of the Anthropocene. The fact that our species has left its mark in every remote bay, on every mountaintop, and across every continent is certainly a cause for reflection. But it might also be seen as a dubious form of branding to celebrate the mess our species has created by naming the next epoch in our honor.

More urgent than getting the name right, however, is the need to think very carefully about where to head from here. For the most noteworthy aspect of the emerging epoch is not the fact that human influence has reached every corner of the entire planet. It is the fact that, as Earth Day approaches 50, technologies are coming online with unprecedented capacity to remake the natural world.

Nanotechnology, synthetic biology and climate engineering have the potential to transform an already tainted planet into an increasingly synthetic whole. Such powerful technologies do not just mark a new period in Earth’s ongoing history. They create the real possibility of what I call a “Synthetic Age.” From the atom to the atmosphere, key planetary processes have the potential to be reconfigured by Earth’s most audacious species.

By shrinking common materials down to the scale of billionths of a meter, nanotechnologists can make available new forms of matter with highly unusual and extremely valuable properties. Using new techniques for editing and assembling DNA, synthetic biologists can fabricate whole genomes, which they can insert into bacterial hosts to hijack their operation. Ecosystem engineers are on the point of redesigning targeted species by sending genetic traits through wild populations, using tools known as gene drives. Climate engineers are preparing to field test technologies that can reduce the amount of short-wave solar radiation entering the atmosphere to cool global temperatures.

What makes these sorts of technologies and practices different from anything that has come before is not how far they reach geographically, but how deeply they go “metabolically.” They mark the beginning of a new period of Earth’s history in which humanity starts to take control of the processes responsible for giving the planet its shape. The biological, geological and atmospheric forces that have sculpted the world over countless epochs start to become the products of human endeavor. Responsibility for some of the formative processes of the biosphere falls increasingly into human hands.

Take the prospect of recreating the genomes of extinct species as an example.

The gene-reading techniques developed during the Human Genome Project, the gene-synthesis methods being refined at places like the J. Craig Venter Institute, and the genome-editing practices now available through CRISPR-Cas9 are together on the cusp of making it possible to recreate close proxies of the genomes of species long ago extinguished from the Earth.

In mammals, it may not be long before a rebuilt genome can be inserted into the evacuated nucleus of an egg cell from a related species and implanted into the womb of a surrogate parent. A primitive version of such a technology was used for the (extinct) Pyrenean ibex in 2003 leading to the mildly disconcerting occurrence of the birth of the world’s first extinct mammal.

In the event, the celebration of the resurrected ibex was cut short by lung deformities, which led to its death within minutes. It is not yet clear whether these types of genetic imperfections can be avoided in future. Some are optimistic that they can. If the technical obstacles are overcome, a genetically manipulated Pyrenean ibex or even a whole new ibex — call it Synthetic Ibex Version 2.0 — could be fashioned from the genes of the extinct animal to occupy the niche that had been left behind.

If de-extinction becomes possible, phenomena once uniquely responsible for shaping the biological world would move out of the natural realm and into the human domain. There would be a genuine alternative to the processes of inheritance, mutation, genetic drift, reproductive isolation and natural selection that were the grist for Darwin’s evolutionary mill. As Harvard chemist George Whitesides said, it would be “a marvelous challenge to see if we can outdesign evolution.”

Earth Day’s annual celebration of the natural world provides a perfect opportunity to reflect on such practices and to note how they put the whole idea of “nature” into question. It is not just that no part of the natural world will be untouched anymore. The natural world — and the processes that have formed it — might increasingly be replaced by synthetic substitutes.

The exact contours of this Synthetic Age are far from determined. There is still the opportunity to pause and to decide that certain physical, biological and atmospheric processes should remain free of human design. Some species might be deliberately left to continue their evolutionary odyssey unmolested. Some landscapes might be selected to remain entirely in the hands of ecological and entropic forces.

So let’s not miss a unique opportunity. On this Earth Day, recognition of the dawning of a new epoch is appropriate. But it is important not because the planet’s fate has already been sealed. It is important precisely because it provides an opportunity for a more conscious and self-reflective decision about the world humanity will choose to create.

Christopher J Preston, Professor of Philosophy, The University of Montana