Are Democrats finally playing to win in 2018 and beyond?

Democrats swung for the fences last week, suing Trump and backing pot legalization. It's about time 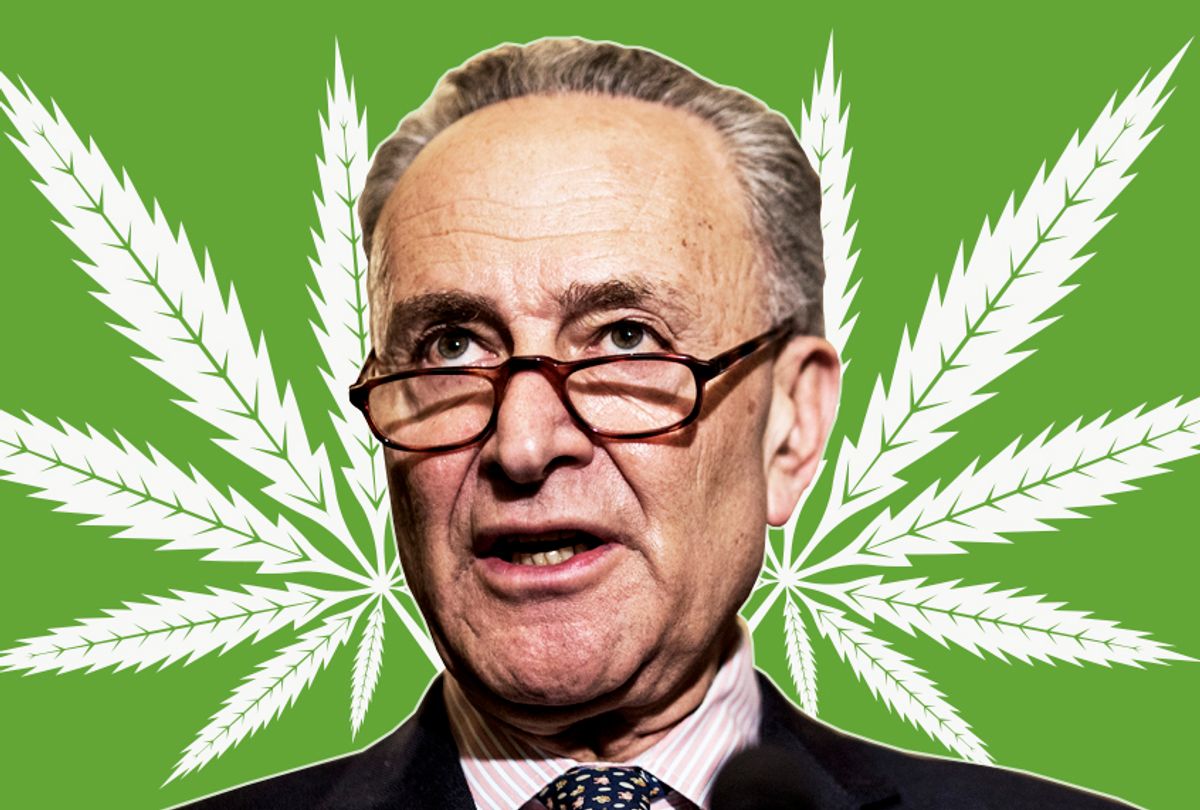 Democrats are bad at politics: It's a truism that even the most loyal Democratic voters will often chuckle sadly over while having drinks with friends. The party has a good foundation of values but so often is overly cautious in its politics, too ready to compromise and sell out, and often playing not to lose rather than to win. These choices leave voters uninspired and sometimes even demoralized, resulting in lower voter turnout and defections at key moments to vanity candidates like Jill Stein.

It's a reputation that persists even when it's unfair — Hillary Clinton's campaign, for instance, took some real risks and bold stances — but perhaps the 2018 election cycle will be a chance for the party to finally break bad habits. Last week, Democrats rolled out two big-deal items that suggest a newfound willingness to swing for the fences, inspire voters and perhaps prevent some younger voters from drifting towards the Republicans.

The biggest news, released just in time to dominate the weekend shows, was the Democratic National Committee's lawsuit against WikiLeaks, the Russian government and Donald Trump's 2016 campaign, alleging a broad conspiracy to steal emails from Democrats and use them to disrupt the 2016 election.

A year ago, such a move would have seemed bonkers, even though it was already clear that the Russian government did steal emails and publish them on WikiLeaks — and there was plenty of circumstantial evidence to suggest the Trump campaign was involved. But it's easy to imagine Democrats, a year ago, being far too worried about being demonized as "conspiracy theorists" for even asking the question.

Going into the 2018 midterms, it has become clear that Democrats cannot be afraid of this issue. There will almost certainly be dirty tricks again, and there will almost certainly be foul play by the Russian government and its agents. Cowering and hoping that someone else solves this problem isn't going to cut it anymore. Robert Mueller is in danger of getting fired in Trump's widening attempt to obstruct justice. Proactive moves are welcome now, and frankly it's a wonder the DNC didn't do this sooner.

Voters will likely be inspired by watching the Democrats take the fight to Donald Trump and attempt to force him to release so much of the information he and his team are likely hiding about their interactions with Russian intelligence services. Maybe something interesting will come out in the court filings that can help expose Trump even further.

Less headline-rocking but possibly just as important: Senate Minority Leader Chuck Schumer has come out in favor of decriminalizing marijuana and will introduce legislation to make that happen. Not only that, but Schumer chose 4/20 — the unofficial stoner holiday — to roll out the announcement. It's a cheeky move guaranteed to get the attention of marijuana enthusiasts, even those who don't otherwise pay attention to politics.

This is smart on a number of levels and not just because a majority of Americans now support marijuana legalization. It's also a way to appeal to young voters who are still up for grabs and haven't settled on a partisan identity yet. And by "young voters," in this case I mean young white men.

Polling data from PRRI shows that most young people have views that closely align with the Democratic Party, which will likely lead to Democratic voting. Most young people view racism as a serious issue, believe gender equity is a priority and care about LGBT rights. Young women, in particular, are politically active.

But when it comes to young men, especially young white men, the polling data shows considerable apathy about politics and skepticism about claims that race and gender discrimination are real issues. Those young white men are, unfortunately, primed to be recruited as Republican voters, especially in the age of Trump, whose loud-mouthed, "politically incorrect" persona has special appeal.

That's why Democrats are smart to move on the marijuana legalization front. Young white men who are still up for grabs — maybe they're not sold on racism or sexism as serious issues, but they haven't gone over to "alt-right" views on these issues — won't listen to social justice appeals. They might, however, be interested in voting for a party that backs their right to smoke up. By introducing a marijuana bill and forcing Republicans to kill it, Schumer is highlighting a very real party difference young voters might notice.

To be clear, there are still troubling signs that Democrats are overly fearful about the possible backlash from embracing progressive policies. Most Democratic politicians, as well as Sen. Bernie Sanders, voted for FOSTA-SESTA, a bill that purportedly fights sex trafficking but that activists say will actually make sex workers less safe. The move stinks of Democratic cowardice, of politicians made fearful by hypothetical campaign ads that make dark accusations about protecting sex traffickers, who have chosen perceived safety for themselves rather than the safety and well-being of sex workers.

Still, last week's bold moves suggest that perhaps Democrats are beginning to play to win, instead of just playing defense all the time. Those who want the party to find some fighting spirit can only hope it's not a coincidence but a sign of things to come. Especially in the age of Trump, it's hard for Democrats to get media attention. (Ask Hillary Clinton.) But taking risks and making strong stands can help cut through the noise.