"If smoking marijuana doesn't hurt anybody else, why shouldn't we allow people to do it?" Schumer says 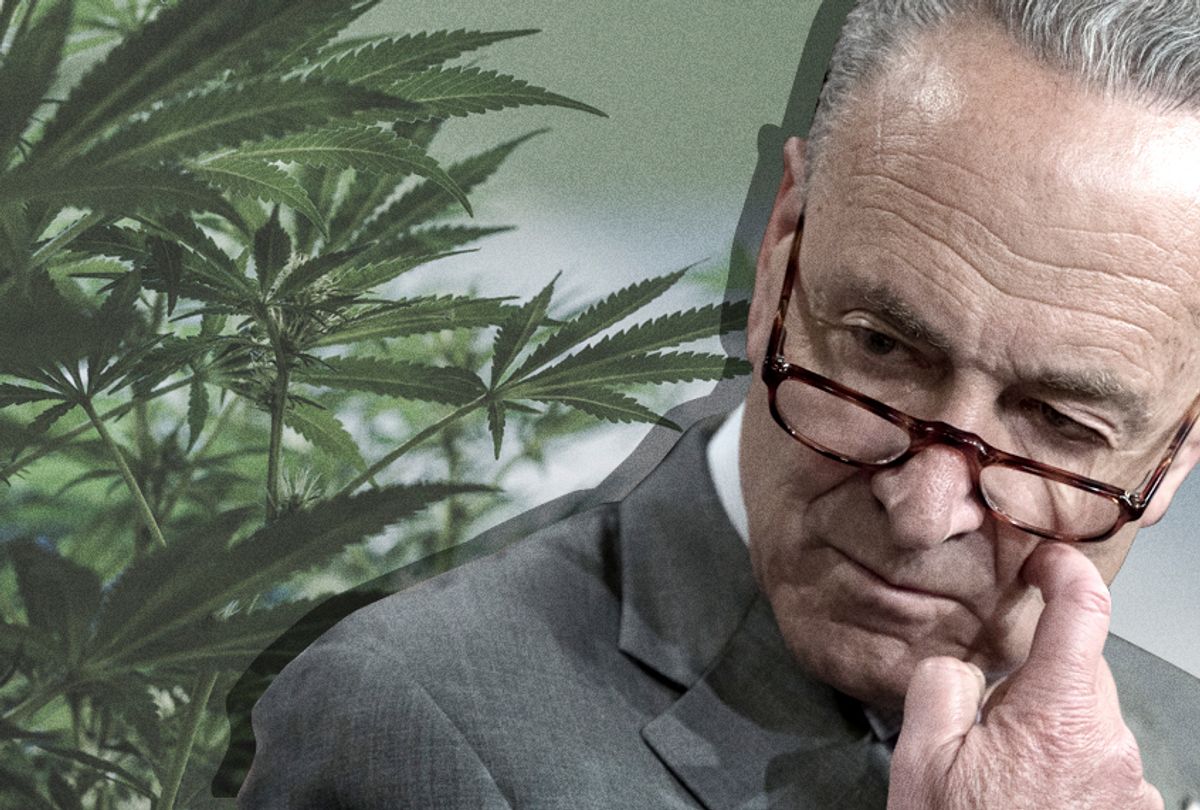 Senate Minority Leader Chuck Schumer is giving supporters of the unofficial marijuana celebration day something they can really light up to — the knowledge that a legislative leader in one of America's two major political parties wants to decriminalize marijuana.

Schumer's legislation would decriminalize marijuana on the federal level by removing it from the Drug Enforcement Agency's Schedule 1 listing. The 1970 regulation identified marijuana as a substance which was effectively as dangerous as heroin. Even staunch opponents of marijuana legalization, like Attorney General Jeff Sessions, have admitted that the substance is not as dangerous as heroin, which in theory should give Schumer a logical edge in trying to decriminalize the drug. The legislation would also help fund marijuana businesses owned by women and racial minorities, mandate additional research on the drug's public health impact and establish that the federal government still has the authority to regulate commercial advertising for the bill.

"If smoking marijuana doesn't hurt anybody else, why shouldn't we allow people to do it and not make it criminal?" Schumer told HBO's "Vice News," in a segment that discussed his upcoming bill.

Schumer made his announcement official using Twitter on Friday.

Schumer isn't the first major political player in Washington to move for marijuana legalization or decriminalization, although he is the most powerful. Sen. Cory Booker, D-N.J., has already sponsored a bill that would legalize marijuana throughout the United States, earning the co-sponsorship of Sen. Kirsten Gillibrand, D-N.Y., and Sen. Bernie Sanders, I-Vt., in the process.

Many Republicans are also joining Democrats in the cause for legalization. Sen. Cory Gardner, R-Colo., managed to stall President Donald Trump's nominees for the Justice Department until the president personally assured him that states like Colorado, which had legalized pot, would not be hindered by the administration. Gardner is now working on a bipartisan bill that would protect states that draft their own marijuana laws from federal interference.

Even Senate Majority Leader Mitch McConnell has moved left on the issue by expediting legislation that would legalize hemp products, according to McClatchy. While no longer serving in Congress, former Speaker of the House John Boehner announced last week that he was joining the board of a marijuana company and was going to advocate for the drug to be legalized.

The bipartisan nature of the legislative support for legalization can be traced back to a phenomenon that began at the state level. Currently there are 30 states, as well as the District of Columbia, that have passed legislation to legalize marijuana to at least some degree. Washington, D.C. and nine states have also legalized marijuana even when it's used for strictly recreational purposes.

On the other hand, when it comes to ordinary voters, there is a sharp divide between Republicans and the rest of the country. Fifty-five percent of Republicans believe marijuana should remain illegal, according to a Pew Research Poll published in January. By contrast, 69 percent of Democrats and 65 percent of independents say that marijuana should be legalized. The numbers became more favorable toward legalization when adjusted for age, however, with 62 percent of Republicans and Republican-leaning independents under 40 believing the substance should be legalized. Seventy-nine percent of Democrats and Democratic leaners under 40 also support marijuana legalization.

Within that survey, there was only one demographic group of any kind in which more people supported keeping marijuana illegal than legalizing it: Sixty percent of white evangelical Protestants believe that it should remain illegal. People who are religiously unaffiliated and African-Americans were the most likely to support legalizing marijuana, with 78 percent and 71 percent believing it should be legalized, respectively.

Overall these political trends seem to represent a major shift in marijuana policy within the United States. Less than 50 years have passed since the 1970 law classified pot as a drug equally dangerous to heroin, despite the lack of medical evidence to support that theory. The movement to criminalize the drug took off in earnest in the 1930s, when bureaucrat Harry Anslinger promoted the prohibition of pot by appealing to racist fears, according to The Guardian. One of his most infamous quotes:

There are 100,000 total marijuana smokers in the US, and most are Negroes, Hispanics, Filipinos and entertainers. Their Satanic music, jazz and swing result from marijuana use. This marijuana causes white women to seek sexual relations with Negroes, entertainers and any others.

Since then, a disproportionate number of racial minorities have faced legal consequences for issues involving marijuana usage, according to the ACLU. One report by the ACLU in 2013 discovered that African-Americans were almost four times more likely to be arrested for marijuana usage than whites, even though both groups use the drug at comparable rates.