Missouri Gov. Eric Greitens has a new problem — and it's a big one 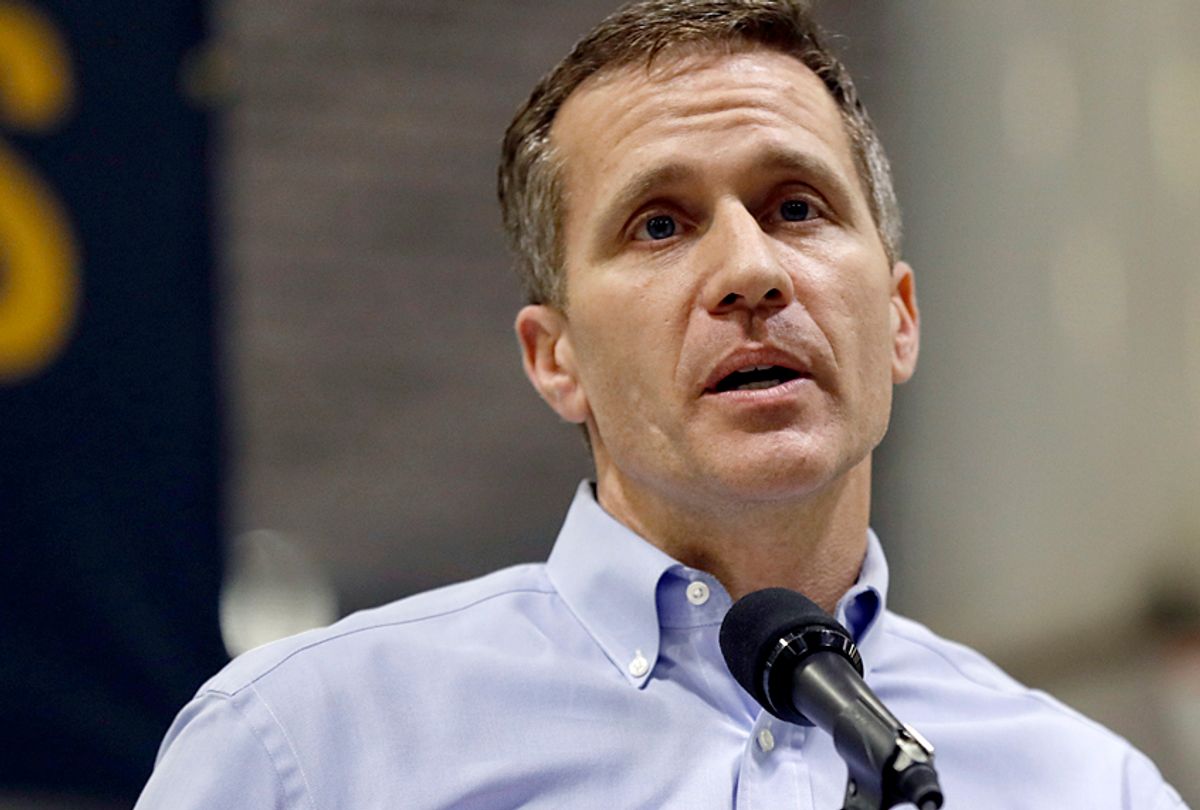 As if Missouri's Republican Gov. Eric Greitens wasn't already on the hot seat amid a disturbing sexual abuse scandal, he has now found himself facing yet another felony charge.

St. Louis Circuit Attorney Kimberly Gardner announced charges against Greitens Friday, including "one felony count of tampering with computer data" after he allegedly unlawfully obtained a donor list from a charity he founded and used it to fundraise for his 2016 governor's campaign, according to The New York Times.

Greitens founded the St. Louis-based veterans charity organization, The Mission Continues, and served on its board of directors. Prosecutors alleged that in April 2015, he directed an employee identified only as "K.T." to take a list of the charity's donors.

"The defendant and K.T. knew that the donor list disclosed on April 22, 2015, was taken without the permission of The Mission Continues," the document said, according to the Times. Personal use of such a list is "prohibited."

Greitens, a former Navy SEAL, has rejected the allegations and said he committed no wrongdoing.

"Her case is falling apart — so today, she’s brought a new one," he said in a written statement, the Times reported. Ed Dowd, his lawyer, added, "This charge makes no sense at all."

"The court will find Eric innocent of yet another absurd charge, and the people of Missouri will learn the true motives behind this action soon enough," Dowd wrote. "This allegation is absurd, and Eric will be found innocent of this accusation in court."

Missouri Attorney General Josh Hawley, who is a Republican, said there was enough evidence to show Greitens had committed a felony. But, "Mr. Hawley said that his office did not have jurisdiction to charge, so he turned over the evidence to Ms. Gardner’s office for consideration," the Times reported.

Greitens has already been dealing with a separate felony charge, invasion of privacy, which stemmed from allegations that he took a nude picture of a woman he had admitted to engaging in an extramarital affair with, and used it as blackmail to keep her quiet. A report from the House investigatory committee detailed that the woman told the panel Greitens' actions were aggressive and unwanted.

The report was signed by the five Republicans and the two Democrats on the committee, and highlighted instances in which "the woman said, Greitens spanked, slapped, grabbed, shoved and called her derogatory names during a series of sexual encounters as he was preparing to run for office in 2015," according to the Guardian.

Greitens has previously denied that any of his encounters with the woman were violent.

In February, the Missouri GOP railed against Gardner for bringing about the charges and said the allegations against the governor were nothing more than a "political hit job" motivated by money Gardner received from "George Soros groups."

Still, nothing seems to be a deal-breaker for conservatives, because while Republican lawmakers have seemed to distance themselves from Greitens — as members of both parties have called for his resignation as of late — he has nevertheless remained quite popular among GOP voters.