Republicans' prime target in 2018? Believe it or not, it's Hillary Clinton

Bereft of ideas, Republicans double down on Trumpism and hope to save their majority with a rerun of 2016 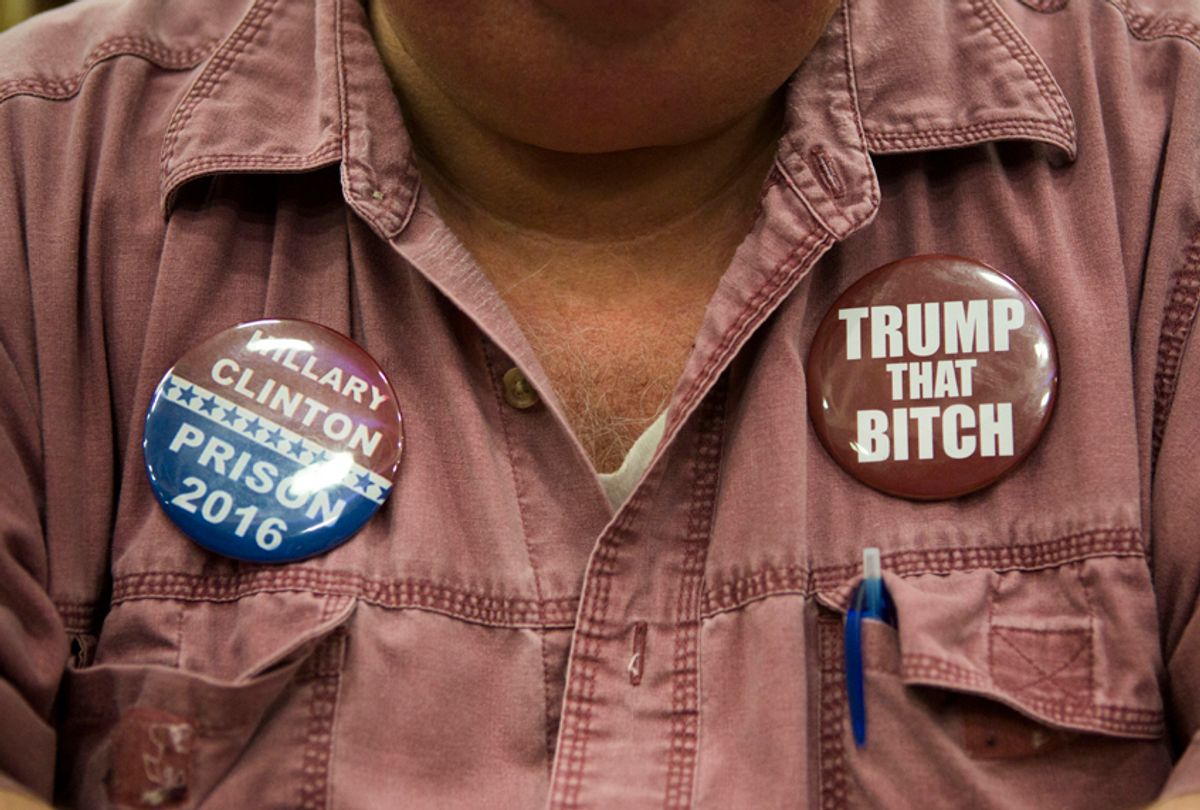 President Trump was forced to spend fewer hours on the Mar-a-Lago golf course this past weekend because of former first lady Barbara Bush's funeral, which he had to pretend to watch on TV. (Protocol says that presidents don't attend first-lady funerals in person, for some reason.) He must have stayed glued to the tube because his Twitter feed was on fire. Trump once again insisted that former FBI Director James Comey had committed a crime, and he even suggested that he could retroactively make any government employee who wrote down something about the president into a criminal by making the document "confidential" months later:

He also claimed he had never heard of Mr. Magoo and Mr. Peepers, so he couldn't have given those nicknames to Attorney General Jeff Sessions and Deputy Attorney General Rod Rosenstein. Trump shared that Sylvester Stallone had called and convinced him he should pardon the legendary African-American boxer, Jack Johnson, who was unjustly convicted of taking his white girlfriend across state lines a hundred years ago. And he wished the Republicans in Congress "good luck" trying to get Sessions to criminally investigate Comey and Hillary Clinton.

In light of The New York Times story reporting that Trump is known to insult his lawyer Michael Cohen and treat him like a lackey, he tweeted that he admires Cohen and doesn't expect him to "flip," which doesn't seem like something an innocent person would say. He also condemned some "drunk, drugged up loser" for saying that Cohen would turn state's evidence, causing millions of people to wonder to which drunk, drugged-up loser in his orbit Trump was referring.

For the record, Kim Jong-un has not agreed to "denuclearization."

These raging tweet-storms have become so commonplace that it may be time to issue a warning for the kids in our country who are growing up thinking that this is normal presidential behavior. If he were president of the seventh grade, perhaps it might be, but honestly, I doubt most seventh grade class presidents are this petulant and undignified. Kids, don't try this at home.

In fact, it's not the young people we have to worry about emulating this immature ranting. It's the other Republicans running for office. According to Jeremy Peters of The New York Times, Trump has inspired GOP candidates all over the country to adopt his puerile political style for their campaigns. They're all wearing MAGA hats and saying things like "Build the wall" and "Drain the swamp" and "Lock her up!" evidently believing that if they can get a little bit of that Trump fairy dust, they'll be big winners just like him.

Peters (one hopes with tongue buried firmly in his cheek) writes that such Republicans "are channeling Mr. Trump’s belligerent and profane style of speaking, seeking to capture that essential but elusive quality that matters so much to voters these days — "authenticity." Nothing says "authentic" better than aping the behavior of another person, a person whose main claim to authenticity is a total inability to tell the truth. But they are going for it:

In Indiana, Representative Todd Rokita, a Republican candidate for Senate, proudly slaps on a red “Make America Great Again” cap in a new ad as he promises to “proudly stand with our president and Mike Pence to drain the swamp.”

Even Republican women are rolling out female versions of Trumpism on the campaign trail. In Arizona, Rep. Martha McSally, running for the Senate seat being abandoned by Jeff Flake, keeps recounting how she tells those Washington swamp-dwellers to "grow a pair of ovaries" and quotes newspaper articles that bleep her using the f-word. Rep. Marsha Blackburn, who is running for Bob Corker's Senate seat in Tennessee, says she "stands up when President Trump walks in the room." (It's unknown if she curtsies as well.) And she wants that wall built now.

Tea Party-style candidate Chris McDaniel, who is staging a GOP primary challenge in Mississippi against newly-appointed Sen. Cindy Hyde-Smith (who replaced the retiring Thad Cochran), likes to say that he was Trump before Trump was Trump. But nobody channels the president better than West Virginia's Don Blankenship, who is running to unseat Democrat Sen. Joe Manchin. Blankenship truly is the most authentic Trump candidate one can imagine, and he's got a good chance to win the nomination, despite serious GOP establishment jitters. He was chairman of Massey Energy, the sixth-largest coal company in the U.S., at the time of the Upper Big Branch Mine disaster in 2010, in which 29 miners were killed. He was indicted for conspiracy to violate federal mine safety and health standards, lying to authorities and securities fraud. He ended up doing a year in federal prison and was released last May. By all accounts, Blankenship is an abusive boss, a rampant polluter and a generally nasty piece of work. One of his campaign ads puts it simply:

We don’t need to investigate our president. We need to arrest Hillary. Lock her up!

That's right: Republicans are still running against Hillary Clinton, mainly so they can thrill their voters with the prospect of putting her in an orange jumpsuit and sending her to rot in jail. That vision appears to have an electric effect on the GOP base that's even more exciting than "Build that wall!"

According to this AP article, Republican strategists are counting on the overwhelming loathing their voters still feel for Clinton and Nancy Pelosi as the key to holding their congressional majority:

“I promise you that you’ll continue to see it — Hillary Clinton starring in our paid media. She’s a very powerful motivator,” said Corry Bliss, who leads the Congressional Leadership Fund, a Republican super political action committee ready to spend tens of millions of dollars to shape House races this fall. “It’s about what she represents. What she represents, just like what Nancy Pelosi represents, is out-of-touch far-left liberal positions.”

Sure, it's all about their "far-left" positions.

As horrifying as it sounds, it appears that the Republicans want to re-run 2016 to validate Trump's victory and endorse his political style and reckless agenda. It could be an inflection point in American history if they pull that off. Let's hope the voters prove to them once and for all that 2016 was a horrible fluke and not something that can ever be repeated.