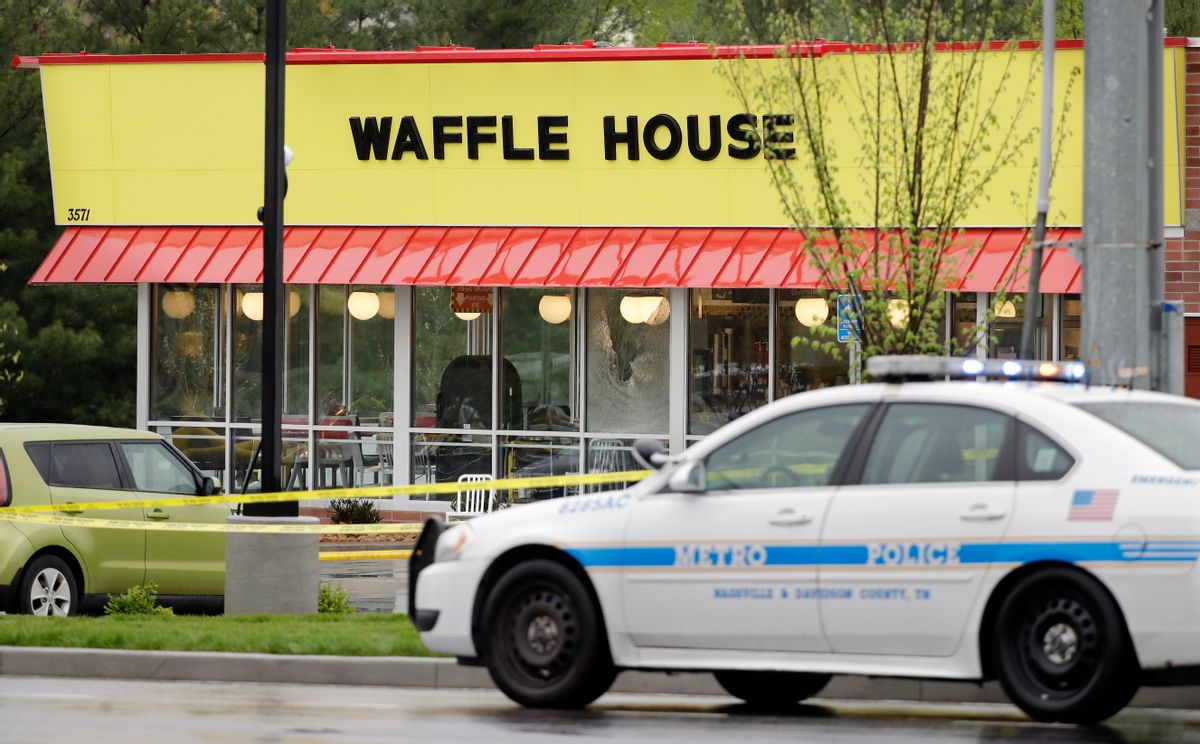 Travis Reinking, the 29-year-old man suspected of killing four people at a Waffle House in Nashville, Tennessee, apparently was able to access his firearms — even though they had been confiscated by authorities months earlier when he tried to breach a barrier near the White House.

Reinking was in Washington with the hope of meeting President Donald Trump. While there, he tried to cross a security barrier at the White House complex, and authorities apprehended him. The FBI office in Springfield, Illinois — near Reinking's hometown of Morton — confiscated his guns and revoked his license to legally own them.

At the time that Reinking breached the White House barrier, he explained that he was a "sovereign citizen," a term that is most popular among anti-government extremists on the right. According to USA Today:

Reinking told agents he needed to see President Trump and defined himself as a sovereign citizen who had a right to inspect the grounds, according to an arrest report by the Metropolitan Police Department in D.C. He was arrested on an unlawful entry charge after refusing to leave the area.

The FBI has said sovereign citizens "believe that even though they physically reside in this country, they are separate or 'sovereign' from the United States."

The agency has also defined sovereign citizens as "anti-government extremists who claim the federal government is operating outside its jurisdiction and they are therefore not bound by government authority—including the courts, taxing entities, motor vehicle departments, and even law enforcement."

Reinking also had a history of run-ins with the law. According to The New York Times:

According to one sheriff’s report from May 27, 2016, he “was delusional and believed the famous entertainer, Taylor Swift, was harassing him via stalking and hacking his phone.” It added that he said he found Ms. Swift at a Dairy Queen in Morton and chased her before she disappeared.

Mr. Reinking’s family members said he had had these delusions since August 2014. The report noted that “Travis is hostile towards police and does not recognize police authority.”

In another episode on June 16, 2017, in Tremont, Ill., the police responded to a complaint that Mr. Reinking, wearing a woman’s pink housecoat, jumped into a pool and began arguing with lifeguards to get them to fight with him. No one at the pool wanted to press charges, the report said.

Yet Reinking's extremist language, his attempt to enter the White House and his violent past did not keep him from accessing guns. Illinois gun laws allow confiscated weapons to be returned to a family member of the person who had had them confiscated, even if the original possessor himself cannot own them. Authorities returned the guns to Reinking's father and, in turn, he is believed to have given them to his son. Sheriff Robert M. Huston of Tazewell County said he did not know how Reinking came back into possession of his guns, although the Nashville police have indicated they believe the father returned them to his son.

His son proceeded to use those guns to commit a horrifying mass shooting. As reported in The Washington Post:

Authorities say the gunman, wearing nothing but a green jacket, opened fire at the Waffle House restaurant in Antioch, Tenn., a community in Nashville, just before 3:30 a.m. He had been sitting in his pickup truck at the Waffle House for a few minutes, looking around, before he got out and immediately began shooting at customers in the parking lot, Metropolitan Nashville Police Department spokesman Don Aaron said.

The man kept shooting as he walked inside, shattering the restaurant’s glass windows. At one point, he stopped, presumably to reload. That’s when police say a customer, James Shaw Jr., lunged at the gunman, wrestled the weapon away from him and tossed it over the counter.

"For a moment, let’s be honest about what happened. Last night, innocent Nashvillians were terrorized by a man with an AR-15. Let’s be honest. Some people see these weapons as having a purpose of terrorizing other people. It’s happening too much," Nashville Mayor David Briley, a Democrat, declared after the shooting, arguing that it proved America needs stricter gun regulations.

"You balance the rights of people to have this privacy, but on the other hand, there needs to be a coordinated effort, especially in terms of mental health issues, to make sure that weapons don’t fall into their hands," Anderson told reporters.

He added, "He’s murdered four times with no apparent reason and no apparent motive. So we’re very concerned."

Reinking remains at large. The Tennessee Bureau of Investigation has added Reinking to its Top 10 Most Wanted List, saying that he is wanted in connection to "three counts of Criminal Homicides" at the Antioch, Tennessee Waffle House. They have added a reward of $2,500 for information that may lead to his arrest.

The four victims killed by Reinking include Taurean C. Sanderlin, 29, of Goodlettsville, Tennessee, Joe R. Perez, 20, of Nashville, Akilah Dasilva, 23, of Antioch and DeEbony Groves, 21, of Gallatin, according to CNN.