Hank Azaria gets the problem with Apu: I'm "happy to step aside"

On "The Late Show with Stephen Colbert," Azaria offers the nuanced response "The Simpsons'" writers lacked 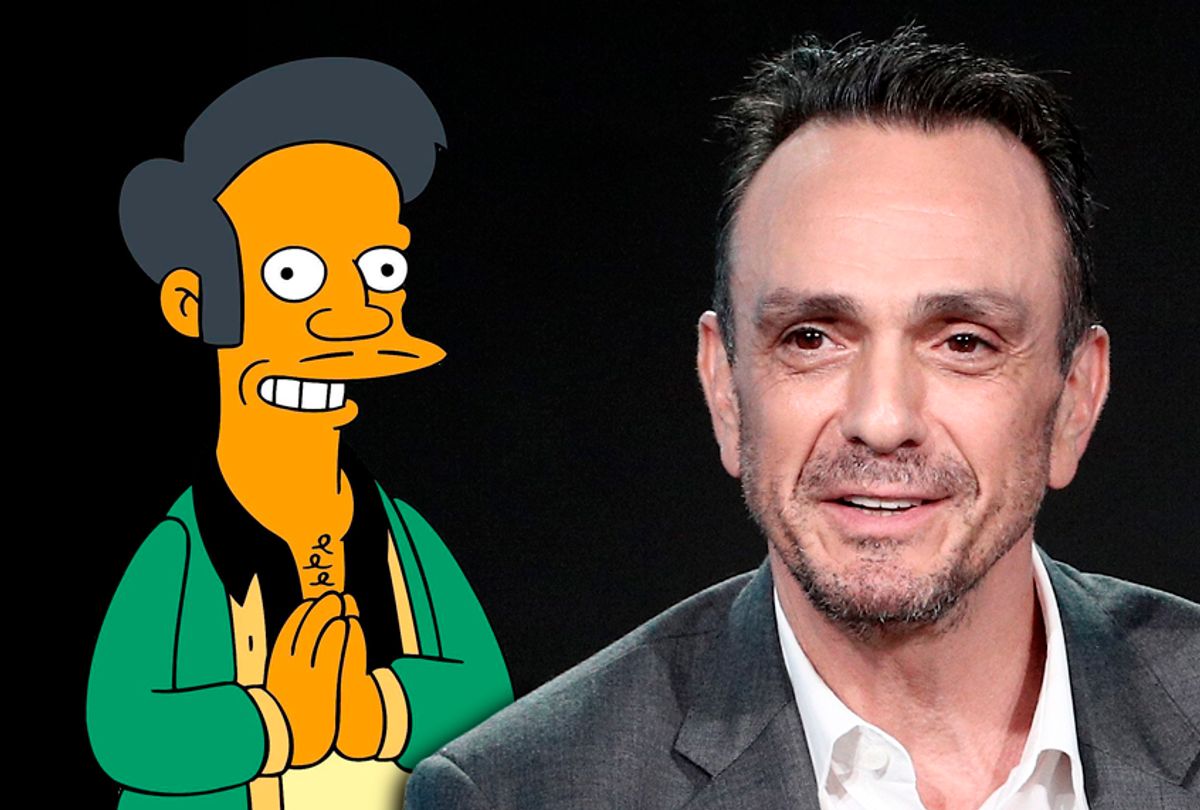 Actor Hank Azaria, who voices Apu Nahasapeemapetilon, among many other characters on "The Simpsons," told Stephen Colbert on Tuesday that "of course" he understands the controversy and concern around the cartoon character and is willing to "step aside" from the role.

During an appearance on last night's episode of "The Late Show with Stephen Colbert," Azaria demonstrated that he has been actively listening to and digesting the growing critiques of Apu. While people, especially of the South Asian community, have long lamented that the stereotypical character — voiced by Azaria, a white actor — presents harmful consequences, those problems were made plainly clear in comedian Hari Kondabolu's documentary "The Problem with Apu." Released last November, the documentary interrogates the dangerous images that "The Simpsons" perpetuates with Apu that South Asians are "servile, devious and goofy, something he and millions of other Americans of South Asian descent deal with every single day," my colleague Melanie McFarland explains.

Beyond the larger implications of Apu, Kondabolu highlights the ways in which the character made him susceptible to bullying as a child and to racist cracks as an adult.

"The idea that anybody, young or old, past or present, was bullied or teased based on the character of Apu — it just really makes me sad," Azaria said to Colbert. "It was certainly not my intention. I wanted to spread laughter and joy with this character. And the idea that it's brought pain and suffering in any way, that it was used to marginalize people, it's upsetting, genuinely."

Azaria's response was far more nuanced and empathetic than that of "The Simpsons" writers, who largely dismissed the concerns and chalked up the criticism to the evolution of political correctness, in an episode titled "No Good Read Goes Unpunished."

Lisa Simpson, typically the show's moral compass, responded to a question from her mother Marge, and said, "Something that started decades ago and was applauded and inoffensive is now politically incorrect. What can you do?" Then she gazes at a framed picture of Apu sitting on her nightstand, with an inscription that reads, "Don’t have a cow, Apu."

Apu did not speak during this episode, and Azaria said he had nothing to do with the scene. "It was a late addition that I saw right around the same time that everybody else in America did," he told Colbert.

Azaria said he's thought deeply about what should happen with Apu, and certainly the answer is not that people should learn how to take a joke or grow a tougher skin. "My eyes have been opened, and I think the most important thing is we have to listen to South Asian people, Indian people in this country when they talk about what they feel and how they think about this character and what their American experience of it has been," he said.

"In television terms, listening to voices means inclusion in the writer's room," Azaria continued. "I really want to see Indian, South Asian writer or writers in the room — not in a token way — but genuinely informing whatever new direction this character may take, including how it is voiced or not voiced. I'm perfectly willing and happy to step aside or help transition it into something new. I really hope that's what 'The Simpson's' does. It not only makes sense, but it just feels like the right thing to do."

Kondabolu reacted to the clip on Twitter, thanking Azaria.

Many on social media responded positively to Azaria's words, thanking him for finally listening and for finally acknowledging people's valid concerns with Apu. But the real hero in the situation is Kondabolu. As entrepreneur and writer Anil Dash wrote, "Years and years of explaining the simple values of representation, dignity, and inclusion pay off. @HariKondabolu you’ve fought for, and won us (and our parents!) the respect we always deserved."