Confronting "The Problem with Apu"

In this lively documentary, Hari Kondabolu breaks down the ugly truth about a favorite character on "The Simpsons" 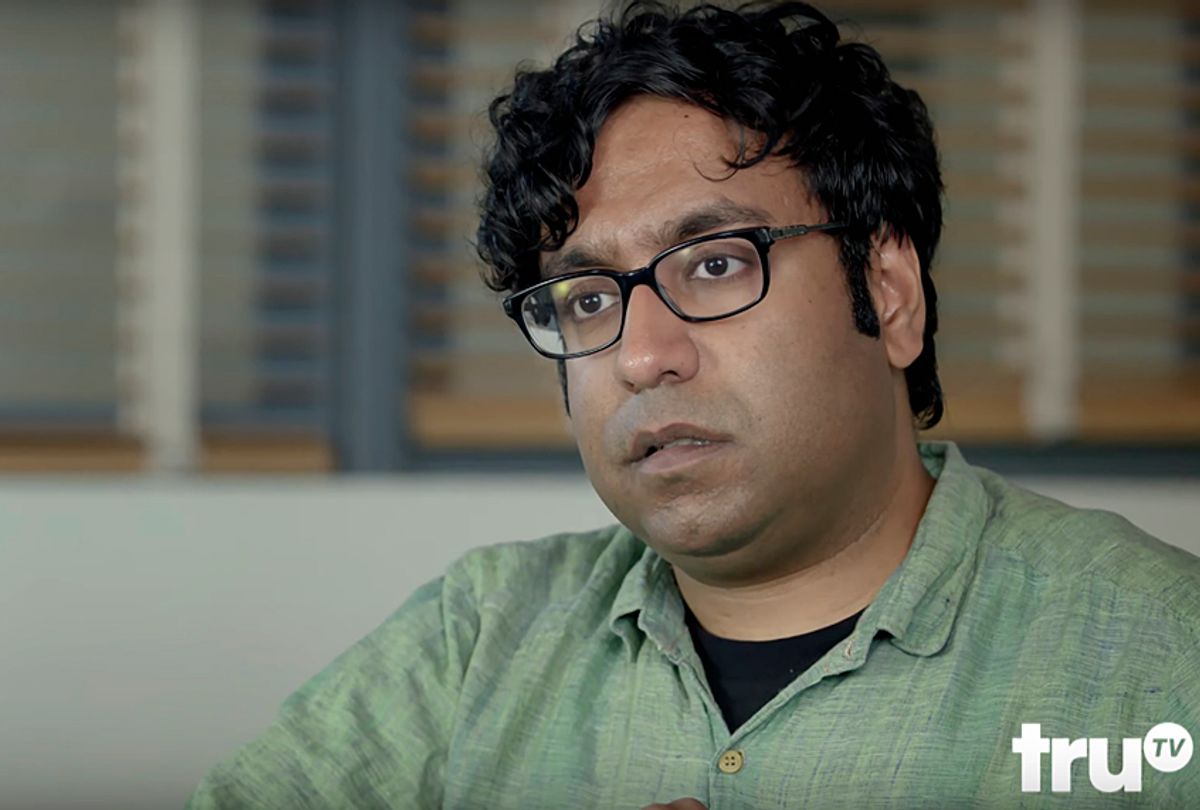 Hari Kondabolu in "The Problem With Apu" (TruTV)
--

Comedian Hari Kondabolu opens his hour-long documentary, “The Problem with Apu,” with a scene from a stand-up appearance in Denver that, at least initially, appears to go smoothly. His jokes land, the audience laughs comfortably with him and he has a relaxed demeanor.

Then it happens during a breath of quiet between bits: an audience member loudly says in that familiar exaggerated accent: “Thank you, come again!”

Apu Nahasapeemapetilon, the Indian Kwik-E-Mart owner voiced by white actor Hank Azaria on "The Simpsons," has struck again. Kondabolu keeps his cool though, defusing the heckler by calling him on his lack of originality and explaining for the benefit the rolling cameras that it’s people like that guy who inspired the comedian to make this documentary.

The moment illustrates the serious challenge Kondabolu faces with “The Problem with Apu,” which makes its TV debut Sunday at 10 p.m. on truTV. There are a number of people who will be predisposed to not want to hear what he has to say, and he’s aware of this. Thus he frames the presentation of this brisk documentary with the same friendly humor as his stand-up, making “The Problem with Apu” as much an exploration of what it means to be a minority who loves a culture that makes some horrifying mistakes in his portrayals, as it is a hunt for elusive quarry.

Apu has haunted Kondabolu all of his life, and the character’s signature four-word phrase — “Thank you, come again!” — accompanied acts of bullying as he was growing up and racist slights as an adult. The popularity of “The Simpsons” and Apu perpetuates the image of Indians being servile, devious and goofy, something he and millions of other Americans of South Asian descent deal with every single day.

What really chafes Kondabolu’s sensibilities is the fact that Apu is voiced by a white actor who Kondabolu desperately wants to interview in his film. His quest to pin down Azaria adds a necessary mystery framework to “The Problem with Apu,” making it something other than a simple examination of a troubling character. Will Azaria consent to talk to Kondabolu? That question becomes a pendulum of tension hanging over this lively work, and although a person can probably guess what the answer is, to Kondabolu’s credit, he keeps the viewer wondering, and hoping, until the very end.

It's worth wondering how many of the people who would learn the most from “The Problem with Apu” will want to watch it. “The Simpsons” is a beloved property, a nearly sacred icon of American popular culture. As primetime animated series go, it is more clever than crude, erring on the side of rowdy humor as opposed to raunchiness. And a number of its passionate fans may not want to confront any implication that their favorite cartoon also is a potent perpetuator of a damaging stereotype.

But the fact that Kondabolu actually likes “The Simpsons” is a major reason “The Problem with Apu” works as well as it does: He is invested in getting fellow fans on his side because he wants the luxury of loving the series without qualification. Throughout the hour, it’s obvious that he loves “The Simpsons.” He just hates Apu.

Kondabolu’s is a more generous take than that of Kal Penn, who declares that he hates Apu and has never been able to divorce his feelings about the character from the series itself. Along the way, Penn concedes that as a South Asian actor who wants to make a living in Hollywood, he’s had to make tough choices. Penn currently co-stars in ABC’s “Designated Survivor,” but he would never have gotten such a high profile role if he hadn’t shot to fame with the title role in “Harold & Kumar Go to White Castle.” And, he explains in the series, he wouldn’t have gotten that role if he hadn’t chosen to play to stereotype as a character named Taj Mahal in the frat boy romp “Van Wilder” beside Ryan Reynolds.

In addition to Penn, Kondabolu also talks to Aziz Ansari, Aasif Mandvi, Hasan Minhaj, Utkarsh Ambudkar, Aparna Nancherla, Maulik Pancholy and many other American actors of South Asian descent for the documentary. The comedian also broadens the context of his critique beyond Hollywood by chatting with critics, scholars and other public figures as Dr. Vivek Murthy, former U.S. Surgeon General of the United States, about the wider impact of these stereotypes.

Even this he handles with humor. “Is it weird that we’re talking about Indian stereotypes,” Kondabolu asks Murthy, “and you’re an Indian doctor?”

Mike Reiss, a writer and producer for “The Simpsons,” and “Simpson” writer and co-executive producer Dana Gould also chat with Kondabolu to give him a viewpoint from behind the scenes of the show that’s both illuminating and sobering. The harshest aspect of “The Problem with Apu” is reserved, by implication, for Azaria.

The actor is more or less tried in absentia as Kondabolu chats with Whoopi Goldberg and W. Kamau Bell about the history of minstrelsy in the United States, drawing parallels between Apu and some truly cringeworthy footage of actors in blackface in early 20th century Hollywood.

Springfield itself is supposed to be a stand-in for AnyTown, U.S.A., a stewpot of people from all walks of life where nearly everybody’s yellow except for the town’s black and brown residents, a group that includes Homer’s drinking buddy Carl, Officer Lou and, yes, Apu.

Carl and Lou are more or less assimilated minorities in Springfield, who speak with the same indistinct speech patterns as everyone else. But not Apu, and as the series lays out, that choice is Azaria’s. By the way, the actor also provides the voices for Carl and Lou, so ponder that for a beat.

“The Problem with Apu” nevertheless welcomes viewers into the conversation by gently weaving the narrative between Springfield and the real world, including the diverse New York neighborhood where Kondabolu lives, used to briefly explain the differences between the cultures and countries thrown together under the South Asian designation.

Kondabolu also speaks directly to the most obvious question one may ask about “The Simpsons”:  How can you argue with a cartoon that stereotypes everybody? The answer, as Ambudkar points out, is that for a very long time Indian Americans and others of South Asian descent had no pop culture representation in American television and film outside of Apu.

The fact that Ambudkar, who plays a recurring role on “The Mindy Project,” was invited to voice one of Apu’s younger relatives on “The Simpsons” in a recent season is evidence that such representation has improved somewhat. Kondabolu acknowledges this positive stride while also pointing out that nearly all of the South Asian American actors working in Hollywood today appear in “The Problem with Apu.”

For Kondabolu, perhaps the most painful part of Apu’s portrayal of South Asians is the way it impacts the lives of Kondabolu’s parents, Ravi and Uma. In a touching scene, Kondabolu shows his mother a scene from “The Simpsons” and informs her that this is how mainstream America sees her.

Uma responds with a shrug, explaining that she knows that’s not who she is. She goes on to praise Azaria for his extraordinary voice work and talent. But when her shocked son asks how she and Ravi can tolerate such stereotyping, she qualifies her statement by saying just because she tolerates it doesn’t mean she’s not offended.

This succinctly captures the gracious seriousness with which “The Problem with Apu” is presented, a work that dances with laughter even as it wrestles with anger. One of the signature outtakes for the documentary shows Kondabolu answering those who advise him to let it go. “Well, I have let it go,” he says. “For 28 years.” He’s taken the issue in hand skillfully here, regardless of whether his message changes how the audience, and Azaria, view Apu from now on.