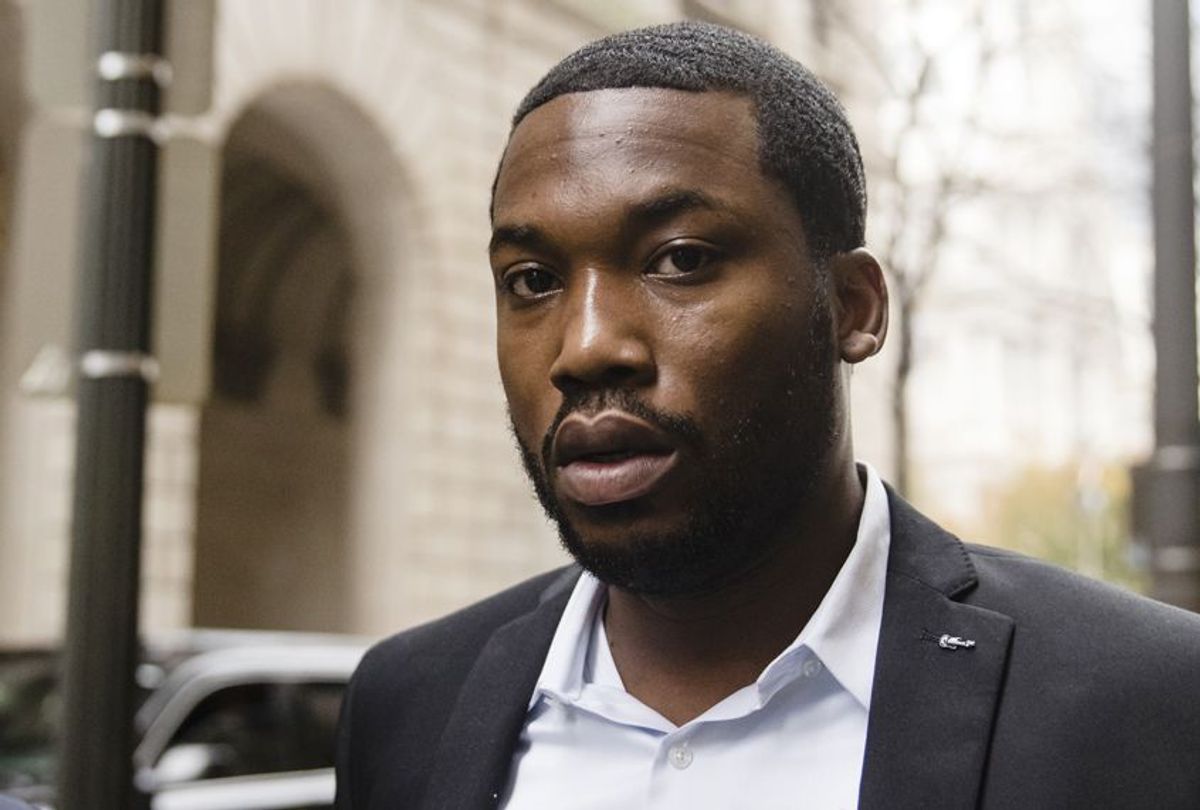 Philadelphia rapper Meek Mill was released from prison on bail Tuesday following a ruling from Pennsylvania's Supreme Court. He had been jailed in a state prison for the last five months on a probation violation stemming from a 2008 drugs and guns conviction.

The rapper's case inspired national outrage about the criminal justice system unfairly impacting black and brown people and put a spotlight on the perils of parole and probation. As I wrote when he was first sent back to prison in November, in Philadelphia, one out of every three people in prison today is not there because they committed any new crime, but for a technical violation of parole or probation.

"While the past five months have been a nightmare, the prayers, visits, calls, letters and rallies have helped me stay positive," Meek said in a statement. "To the Philadelphia District Attorney’s office, I’m grateful for your commitment to justice – not only for my case, but for others that have been wrongfully jailed due to police misconduct."

The statement continued, "Although I’m blessed to have the resources to fight this unjust situation, I understand that many people of color across the country don’t have that luxury and I plan to use my platform to shine a light on those issues. In the meantime, I plan to work closely with my legal team to overturn this unwarranted conviction and look forward to reuniting with my family and resuming my music career."

Pennsylvania's highest court "cited the credibility of Mill's arresting officer, Reginald Graham, who has since been identified on a list of so-called dirty cops in Philadelphia," NBC Philadelphia reported. He was the sole witness to testify during Mill's original 2008 conviction, and a former police officer and ex-colleague of Graham accused him of lying under oath to ensure Mill was sent to prison.

In March, Philadelphia District Attorney Larry Krasner supported Mill being released on bail, pending his appeal to the 2008 charge. "There is a strong showing of likelihood of (Mill's) conviction being reversed (in whole or in part)," Krasner said in a statement. "Therefore the Commonwealth is unopposed to (Mill's) petition for bail."

Krasner, who was a civil rights and criminal defense attorney elected to District Attorney as a staunch criminal justice reform advocate, continues to deliver on his campaign promises. The list of suspected Philadelphia police officers with a history of lying, corruption, racial discrimination or violence was not created by Krasner (it was ordered by former District Attorney Seth Williams,) but he made the list public, and his office has been working to expand it and verify it.

The Supreme Court ruling does not absolve Mill. But it is a necessary intervention.

Last week, the Assistant District Attorney told Philadelphia Common Pleas Judge Genece Brinkley that Mill should be granted a new trial, given the questions raised about the arresting officer. Although both the defense and prosecution were now unanimous in requesting a new trial date, Brinkley was not moved and set an evidentiary hearing for June 18. She also refused to grant bail, which Mill's team appealed to the Pennsylvania Supreme Court.

"We are thrilled that the Pennsylvania Supreme Court has directed Judge Brinkley to immediately issue an order releasing Meek on bail," Mill's lawyer Joe Tacopina said in a statement. "As we have said all along, Meek was unjustly convicted and should not have spent a single day in jail."

Mill's defense lawyers have accused Brinkley of inappropriate behavior and bias. She has presided over Mill's case since his 2008 conviction, when he served an eight-month sentence. In November, against the recommendation of the district attorney and Mill's probation officer, she sent him back to prison for two to four years, citing two arrests in 2017: for popping a wheelie during a music video shoot and for allegedly getting into a fight. Both charges were either dropped or dismissed.

#FreeMeekMill has been a popular hashtag and rallying call since his sentence. Supporters believe Mill's case is indicative of the way the parole and probation system entraps and haunts people for life. "For about a decade, he’s been stalked by a system that considers the slightest infraction a justification for locking him back inside," Jay-Z wrote about Mill in The New York Times. "Instead of a second chance, probation ends up being a land mine, with a random misstep bringing consequences greater than the crime."

"Meek’s case is symbolic of hundreds of thousands of cases out there," Jessica Jackson Sloan, attorney and current mayor of Mill Valley, California, told Salon in November. "There’s 4.65 million people who are on probation or parole in this country. Even more alarmingly, there’s 61,000 people who are currently in prison because of a technical violation. You see a case like Meek Mill’s, it just highlights the worst injustices in the system."