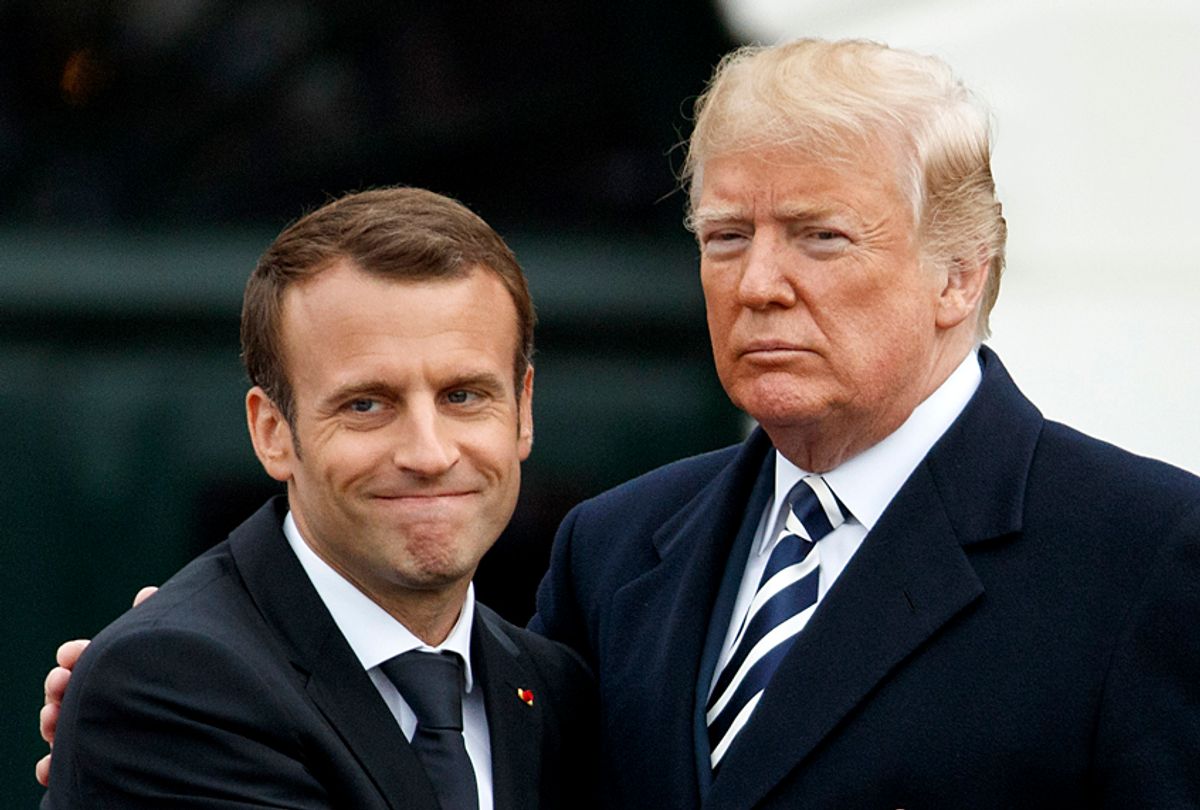 There was a time not all that long ago when the right wing of the Republican Party referred to France as the land of "cheese-eating surrender monkeys" and were so offended by its leadership's unwillingness to blindly follow George W. Bush's headlong march to war that they changed the name of french fries in the House of Representatives cafeteria to "freedom fries."

Recall this  legendary exchange on CNN's "Crossfire" between Tucker Carlson and French foreign policy expert Justin Vaisse over whether or not France was going to be economically devastated by American disdain for everything French:

Carlson: But just, honestly, just correct the misperception here. This is not simply an effort by the administration to beat up on France. This is coming -- there's a deep wellspring of anti-French feeling in this country, and it's going to have consequences. This is a bottle of French wine. This is a bottle of American wine.

Carlson: And it's bigger. That's exactly right. More forceful. There will be Americans who boycott French products. This in the end is really going to hurt France, isn't it?

Vaisse: No, I think it is going hurt wine lovers.

In many ways, those days were no less surreal than these.

Just imagine if Tucker Carlson of 2003 could have seen into the future, to a day when a Republican president stood on the White House steps kissing and hugging and holding hands with the president of France. That happened:

Ashley Parker of The Washington Post examined the dynamics of the handsy bromance:

The interactions throughout the visit, said Patti Wood, a body language expert and author of “SNAP: Making the Most of First Impressions, Body Language, and Charisma,” largely fall under a category known as “gamesmanship.”

In calling out Macron’s alleged dandruff, she said, Trump “did something called primate grooming.”

“It said, ‘We have an intimate relationship, but I’m dominant, I’m the alpha gorilla, I’m going to groom you,’ ” Wood said. “‘But I’m going to criticize you by saying you have dandruff, and I’m going to do that on the world stage and see how you handle that.”

She wasn't the only one to make that observation:

It's funny, but it's also weird. I don't think I've ever seen anything quite like it. George W. Bush was always somewhat awkwardly familiar with fellow leaders. He used to pal around with British Prime Minister Tony Blair and made Angela Merkel uncomfortable with his frat-boy horseplay. But even he didn't play this kind of primitive dominance game.

It wasn't just physical. It's clear that Emmanuel Macron came with a message about Iran, probably coordinated with other European leaders. For all his touchy-feely affection for the French leader, Trump stomped all over the Iran nuclear deal during his comments at a joint photo-op and press conference. He called the agreement "insane" and "ridiculous," and threatened that Iran would "have bigger problems than they ever had before" if it defied him. He went off on his usual tiresome, ill-informed rant about how the U.S. had sent planeloads of money to Tehran to pay off the Iranian government. (It was their own money.)

Macron indicated that they were talking about adding some provisions to the agreement that could allay Trump's concerns. For his part, Trump said later that he might be flexible but then retreated to his "we'll see what happens" stance, which usually means he has no clue what he's talking about:

Nobody knows what I'm going to do on the 12th. This is a deal with decayed foundations. It's a bad deal, it's a bad structure, it's falling down. It should have never, ever been made.

Macron's ploy to appeal to Trump's colossal ego, in the vain and arrogant assumption that he could manipulate the ignorant leader by being his friend, didn't seem to work in any substantive way. He isn't the first to try that gambit, or the first to fail. Trump loves to be loved, but it's a one-way street.

Just ask Sen. Lindsey Graham, R-S.C., who spent months cultivating Trump's friendship, flattering him and coddling him and telling him what a big, strong leader he was, only to be crudely and publicly demeaned when Graham tried to broker a DACA deal that Trump's hard-liners didn't like. Graham thought he had earned the president's trust, and probably had -- as far as it extends to anyone.

Since Trump doesn't understand the job of president or the issues, he has no basis on which to make decisions other than some primitive playground dominance game or, as far as we know, simply flipping a coin. He doesn't know what he's going to do because he doesn't know anything.

This profile of former National Security Adviser H.R. McMaster in this week's New Yorker lays out in chilling and alarming detail just what an unstable, unprepared man the president is and the outrageous lengths to which people in the administration must go to keep him from blowing up the world out of sheer ignorance, emotional volatility or both. It's apparently much worse than we knew.

The lengthy report by Patrick Radden Keefe is not especially kind to McMaster, who is portrayed as lacking in self-awareness on a rather grand scale himself. He fails to figure out any way to maneuver or persuade this willful president to take his duty seriously and apply even a modicum of energy toward learning what he needs to know, or governing his impulsive nature. It's a lethal and dangerous combination that nobody quite knows how to deal with. McMaster ended up impugning his own integrity and being shown the door for his trouble, as have so many others in the president's orbit. Nobody's reputation survives Donald Trump.

Macron probably believes he has no choice but to try to get through to Trump however he can, but the buddy bromance is a failure. (Macron's popularity is sinking fast at home, and he's already being called "Trump's bichon frise.") The only thing any responsible ally can do is prepare for the worst and hope that Trump somehow randomly chooses the right path.

The whole world is just floating on the Trump wave right now, praying it doesn't rise up and crash over all of us. You can love him or hate him or ignore him. It won't make a bit of difference.