President Donald Trump on Michael Cohen: "With this crazy Stormy Daniels deal, he represented me"

The president says too much on "Fox & Friends," to the conservative hosts' awkward chagrin 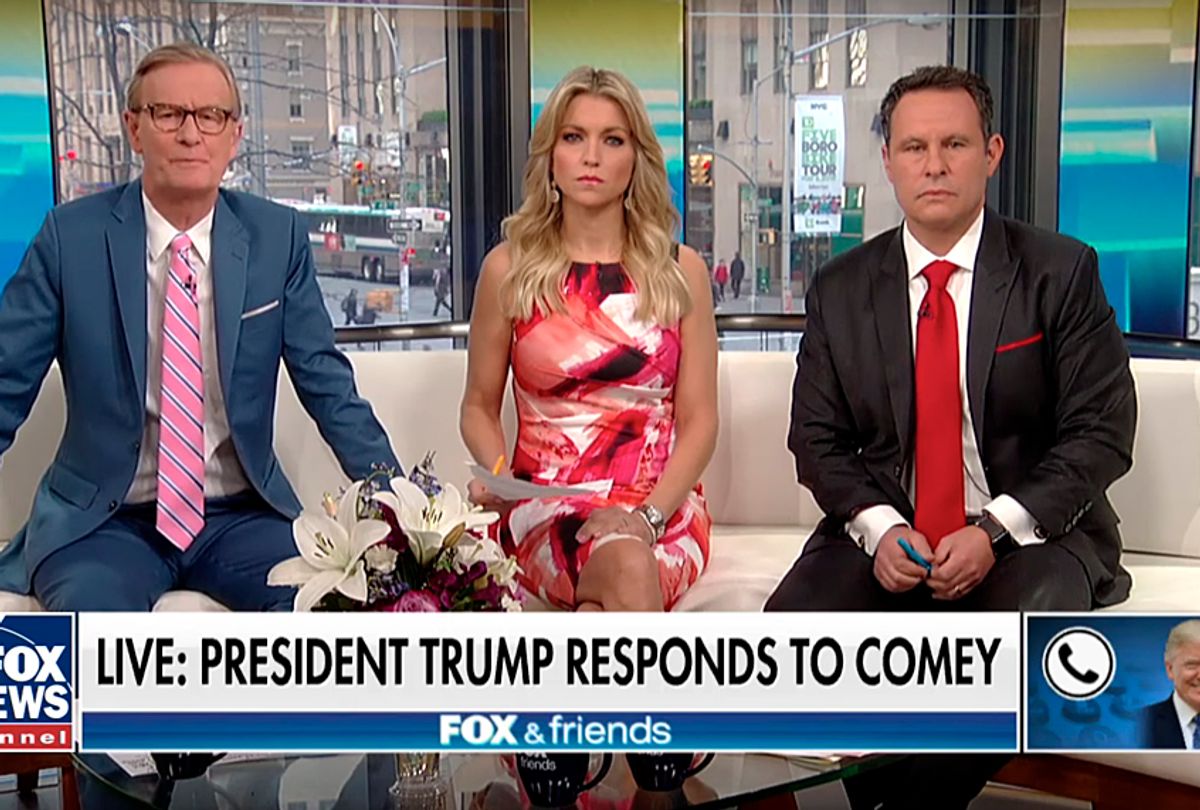 President Donald Trump's appearance on "Fox & Friends" Thursday morning ended awkwardly, as the conservative hosts attempted to ease the commander-in-chief off the air before his words got him into too much trouble.

The most notable moment of the interview occurred when the conservative hosts asked Trump about the recent raid on the office of the president's private attorney, Michael Cohen.

After the Fox News hosts cut off the president to ask him about the exact nature of Cohen's relationship to Trump through his work as an attorney, Trump insisted that "just so you understand, I have many attorneys. I have attorneys. Sadly, I have so many attorneys, you wouldn't even believe it." Trump also claimed that Cohen's activities with him only constituted "a tiny, tiny little fraction" of his total legal work.

Then, Trump acknowledged that "Michael would represent me, and represent me on some things. He represents me. Like, with this crazy Stormy Daniels deal, he represented me. And, you know, from what I see, he did absolutely nothing wrong. There were no campaign funds going into the . . ."

At that point, "Fox & Friends" co-host Ainsley Earhardt asked Trump why Cohen would have pleaded the Fifth Amendment if he had done nothing wrong.

"Because he's got other things. He's got businesses," the president replied. "And from what I understand, they're looking at his businesses. And I hope he's in great shape. But he's got businesses, and his lawyers probably told him to do that. But I'm involved, and I've been told I'm not involved."

But before Trump could continue with his venting about Cohen, the Fox News hosts abruptly switched topics to rapper Kanye West, who has recently emerged as an outspoken sympathizer of the president.

.@foxandfriends steer Trump from being very worked up about Michael Cohen to talking about his bromance with Kanye West pic.twitter.com/MRccBk0YXX — Aaron Rupar (@atrupar) April 26, 2018

Michael Avenatti, the attorney representing Stormy Daniels, told the hosts of the MSNBC program "Morning Joe" that Trump's statement was a "hugely damaging admission" given how it contradicts the president's earlier claims that he knew nothing about Cohen's alleged efforts to pay Daniels in exchange for her silence over her rumored affair with the then-reality TV star. "Another gift from the heavens in this case – they keep coming. I don't know how I've fallen into such good luck in this case, but I'm going to take it," Avenatti said.

"Hugely damaging admission by the president, because according to what he said on Air Force One a few weeks ago, he didn't know anything about the agreement," Avenatti continued. "He didn't know anything about the payment. Michael Cohen went off and did this on a lark, and Mr. Trump knew nothing about it. We now find out that that's bogus." Avenatti also contextualized the comments as part of Trump's larger habit of speaking recklessly and in ways that seem to get himself into trouble.

.@MichaelAvenatti reacts in real time to Trump's reckless comments about Cohen & Daniels: "This is what happens when you have an undisciplined man who finds himself in litigation & doesn't know when to not make statements... There's serious consequences." pic.twitter.com/jPz3r5x4fy — Aaron Rupar (@atrupar) April 26, 2018

"This is what happens when you have an undisciplined man who finds himself in litigation and doesn't know when to not make statements," Avenatti told his hosts, noting that there is a difference between doing that "in the public sphere" and doing that in litigation, where "there's serious consequences."

And Trump's troubling comments during the "Fox & Friends" interview weren't limited to discussing the Michael Cohen situation. He also ranted about special counsel Robert Mueller and the ongoing investigation into alleged collusion between his 2016 presidential campaign and Russia.

Trump on him meddling in DOJ: Because of the fact that they have this witch-hunt going on against the president of the United States, I have taken the position, and I don't have to take this position and maybe I'll change, that I will not be involved with the Justice Department." pic.twitter.com/ZRTbTXz9PE — Aaron Rupar (@atrupar) April 26, 2018

After denouncing James Comey's new memoir, which gives an unflattering account of Trump, and condemning the former FBI director for alleged leaks, the president began to rail against the Justice Department for not pursuing his political foe. When Steve Doocy pointed out that the department is under Trump's control, the president acknowledged "you're right" before ranting about the ongoing Russia probe.

"I answer this all the time," Trump told Doocy. "Because of the fact that they have this witch-hunt going on — with people in the Justice Department that shouldn't be there — they have a witch-hunt against the president of the U.S. going on. I have taken the position — and I don't have to take this position, and maybe I'll change — that I will not be involved with the Justice Department. I will wait until this is over."

Trump then proceeded to claim that he had accomplished more during his first year as president than any of his predecessors – and insisted that even his "haters" would admit that. This claim overlooked such achievements as President Franklin D. Roosevelt passing the landmark legislation of the New Deal and Lyndon B. Johnson passing the Civil Rights Act of 1964 during their perspective opening years as America's commander-in-chief.