Ben Carson's war on the poor puts Republicans in a bind 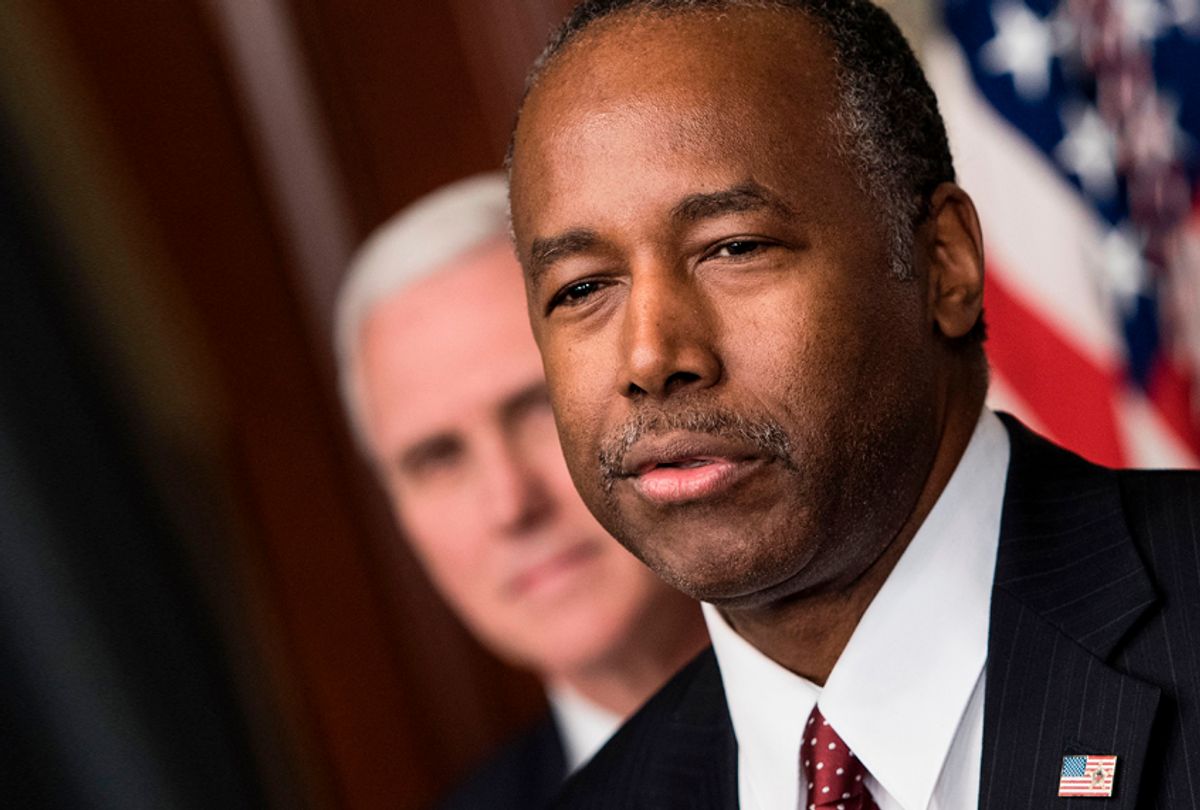 President Donald Trump's choice for Secretary of Housing and Urban Development, Dr. Ben Carson, delivered on the president's command to move people "out of poverty" by proposing to raise the rent on some of America's most vulnerable communities.

On Wednesday Carson released legislative text that would raise rent for tenants in government-subsidized housing to equal 35 percent of gross income (based on the assumption that they work 15 hours a week at the federal minimum wage).  This amounts to an increase of 5 percentage points from the current policy, which established a cap on the rate of rent at 30 percent of adjusted income. This means that the cap on rent for America's poorest families would rise to $150 per month instead of $50 per month.

Carson titled his proposed bill the “Making Affordable Housing Work  Act,” in one of his most distinctly Trumpian moves since assuming office. And officials at the Department of Housing and Urban Development claimed this would only affect about half of the 4.7 million families currently receiving housing benefits. But not all policy experts agree with that estimate.

"More than 4 million households will see their rents rise," Will Fischer, Senior Policy Analyst at Center on Budget and Policy Priorities, told Salon. He also emphasized that the effect of Carson's new policy on poor families would be devastating.

"These proposals will raise rents for working poor families, the elderly and people with disabilities and force them to divert money from other basic needs like clothing or food or medicine," Fischer told Salon. "In some cases it's gonna push them to the brink and put them at risk of eviction or homelessness. The HUD says that these are reforms but they don't pursue any particular policy goal other than squeezing rent out of these families."

Fischer also cast doubt on the idea that Carson's underlying goal is to reform the system and help poor families.

"They say they want to encourage work but they're raising rent on working families. What this is really about is squeezing more money out of these people," Fischer told Salon. "It is particularly inequitable because we just had a really big tax cut for the wealthy and large corporations that will add to the deficit, and now they're turning around and saying they have to raise rent on some of the poorest people in the country."

It's worth noting that, while Carson may be spearheading these changes, he is hardly working on his own — and even if he was, he doesn't have the power to make these policy alterations unilaterally, since he needs congressional approval.

As The Washington Post pointed out, the Trump administration has pursued a sweeping plan to overhaul America's welfare state:

The ambitious effort to shrink federal assistance has been dubbed “Welfare Reform 2.0’’, after Bill Clinton’s overhaul of the welfare system in 1996. The proposals — affecting housing, food stamps and Medicaid — would require congressional approval.

The proposal approved by the House Agriculture Committee would expand work initiatives, mandating that most adult recipients under 60 work part-time or enroll in a state-run training program. It would apply to as many as 7 million adults.

Carson's tenure at the Department of Housing and Urban Development has been marked by both his perceived insensitivity to the needs of the poor and by a series of scandals. Last month, Carson changed the department's mission statement from this:

HUD's mission is to create strong, sustainable, inclusive communities and quality affordable homes for all. HUD is working to strengthen the housing market to bolster the economy and protect consumers; meet the need for quality affordable rental homes; utilize housing as a platform for improving quality of life; build inclusive and sustainable communities free from discrimination, and transform the way HUD does business.

HUD’s mission is to ensure Americans have access to fair, affordable housing and opportunities to achieve self-sufficiency, thereby strengthening our communities and nation.

And while Carson has been pinching pennies when it comes to America's poor, he has been under fire for not following similar standards himself. The most conspicuous example was a $31,000 furniture set order for his office, one that he later moved to cancel after it leaked to the public.

Carson has also recently found himself mired in controversy for appearing on a talk show hosted by conservative pundit Sean Hannity without disclosing the latter's relationship with HUD. Hannity had spent at least $90 million on more than 870 homes in seven states over the past ten years or so and partially used support from HUD in order to do so, according to The Guardian.

The Georgia purchases were funded with mortgages for $17.9m that Hannity obtained with help from Hud, which insured the loans under a program created as part of the National Housing Act. The loans, first guaranteed under the Obama administration, were recently increased by $5m with renewed support from Carson’s department.

Late last month, Hannity’s mortgages were replaced with loans for $22.9m that were rewritten with Carson’s Hud and a new bank. There was no indication that Carson was personally involved in the process. Carson does, however, have the authority to allow Hannity from 2019 to convert the rental complexes into condominiums for sale, which could be lucrative for the television host.

It remains to be seen if Carson's career in government will be able to survive these scandals — or, for that matter, whether his departure would even help the vulnerable communities that are clearly being targeted by the Trump administration. But the biggest question is if Republicans in Congress, who still show reluctance to distance themselves from the Trump administration, will support Carson's bill ahead of the midterm election.