Just as former anchor Matt Lauer denies allegations against him for the first time, Tom Brokaw faces his own 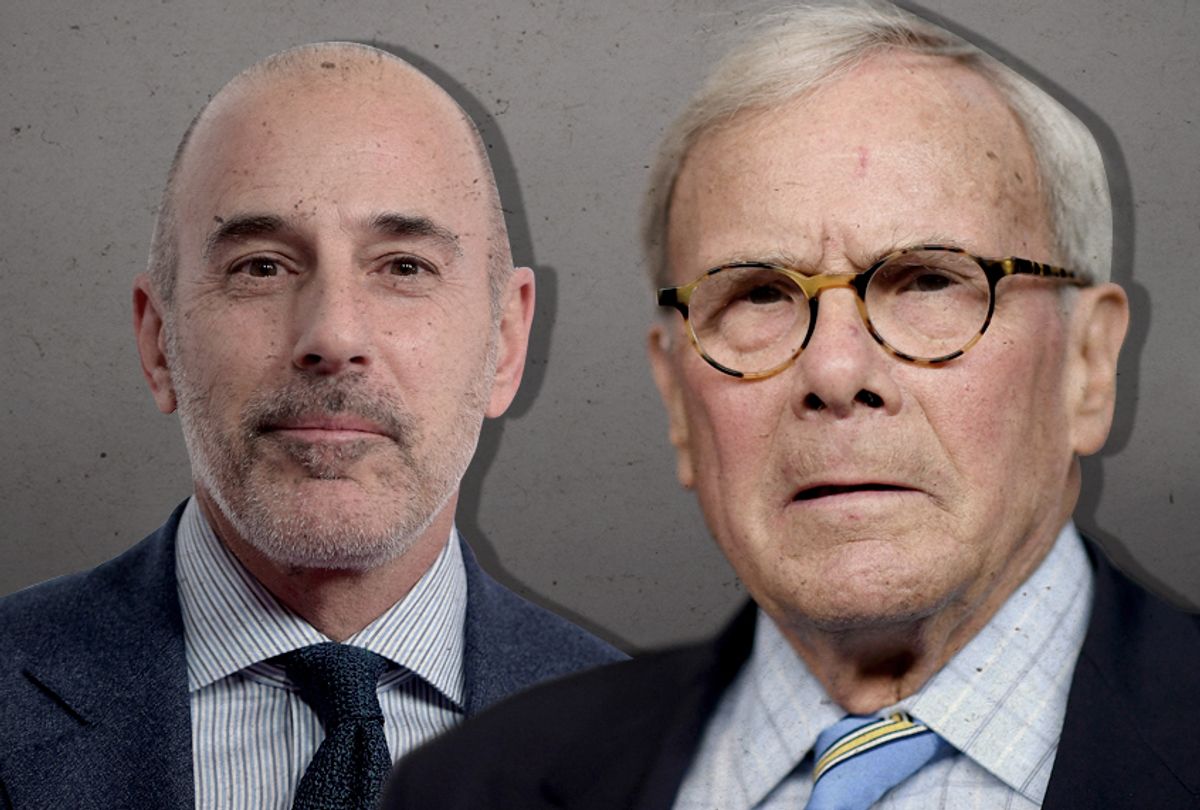 After five months of silence following his firing from NBC over allegations of sexual harassment were made against him by multiple women, Matt Lauer has decided to speak up, just as his former colleague Tom Brokaw is hit with new sexual harrasment allegations of his own.

The fired "Today" show anchor claims that while he might have behaved inappropriately, he never coerced or abused anyone.

“I have made no public comments on the many false stories from anonymous or biased sources that have been reported about me over these past several months," Lauer said in a statement to The Washington Post, in a report by Sarah Ellison. "I remained silent in an attempt to protect my family from further embarrassment and to restore a small degree of the privacy they have lost. But defending my family now requires me to speak up.”

“I fully acknowledge that I acted inappropriately as a husband, father, and principal at NBC,” Lauer continued. “However, I want to make it perfectly clear that any allegations or reports of coercive, aggressive, or abusive actions on my part, at any time, are absolutely false.”

In the same report, however, Lauer’s former co-host Ann Curry said she recalled a female NBC staffer telling her that she had been “sexually harassed physically” by Lauer, insisting that Curry not disclose her identity to anyone. “A woman approached me and asked me tearfully if I could help her,” Curry told The Post. “She was afraid of losing her job. . . . I believed her.”

Curry, who left NBC in 2015, co-hosted "Today" alongside Lauer for a year, from the summer of 2011 to 2012. Some speculate she was removed from her role as co-host of the program in June 2012 amid low ratings and a testy relationship with Lauer.

Curry said that following the female staffer’s story, she told NBC management to keep an eye on Lauer, particularly his treatment of women. The anonymous female staffer corroborated the story to the Post but an NBC spokesman told the paper that there’s no record of the warning in Lauer’s personnel file.

When NBC learned that two outlets were working on stories about sexual misconduct involving Lauer, the network says that executives looked for records of complaints or settlements but found neither.

When asked executives including NBC News President Noah Oppenheim and NBC News Chairman Andy Lack asked Lauer directly if there ever was any sexual misconduct, Lauer said he was “racking his brain and couldn’t think of anything at all," one executive said.

The Post ran the new allegations against Lauer in a report that also details new misconduct claims against long-time network anchor Tom Brokaw, all of which the former newsman denies.

Linda Vester, a former NBC correspondent, told The Post that Brokaw "made unwanted advances toward her on two occasions in the 1990s, including a forcible attempt to kiss her." She was in her 20s and did not file a complaint, the paper notes.

"I met with Linda Vester on two occasions, both at her request, 23 years ago, because she wanted advice with respect to her career at NBC," he told The Post in a statement issued by NBC. "The meetings were brief, cordial and appropriate, and despite Linda’s allegations, I made no romantic overtures towards her, at that time or any other.'"

Vester told The Post she "did not report [the allegations] to management out of fear of retribution. Even if such incidents are reported through internal channels NBC is not willing to hire an outside arbiter."

“I am speaking out now because NBC has failed to hire outside counsel to investigate a genuine, long-standing problem of sexual misconduct in the news division,” she said.

She told the Post she has no intention of filing a legal claim against Brokaw or NBC.

A second woman, who spoke on the condition of anonymity, also told the paper that "Brokaw acted inappropriately toward her in the ’90s, when she was a young production assistant and he was an anchor. Brokaw said no such incident happened."

The fresh allegations against Matt Lauer and Tom Brokaw come as disgraced broadcaster Charlie Rose, who was accused of sexual harassment by eight women in November, is reportedly trying to launch a #MeToo redemption show where he would interview other high-profile men who have been accused of sexual misconduct, according to the New York Post.