Trump congratulates himself for historic North and South Korea summit 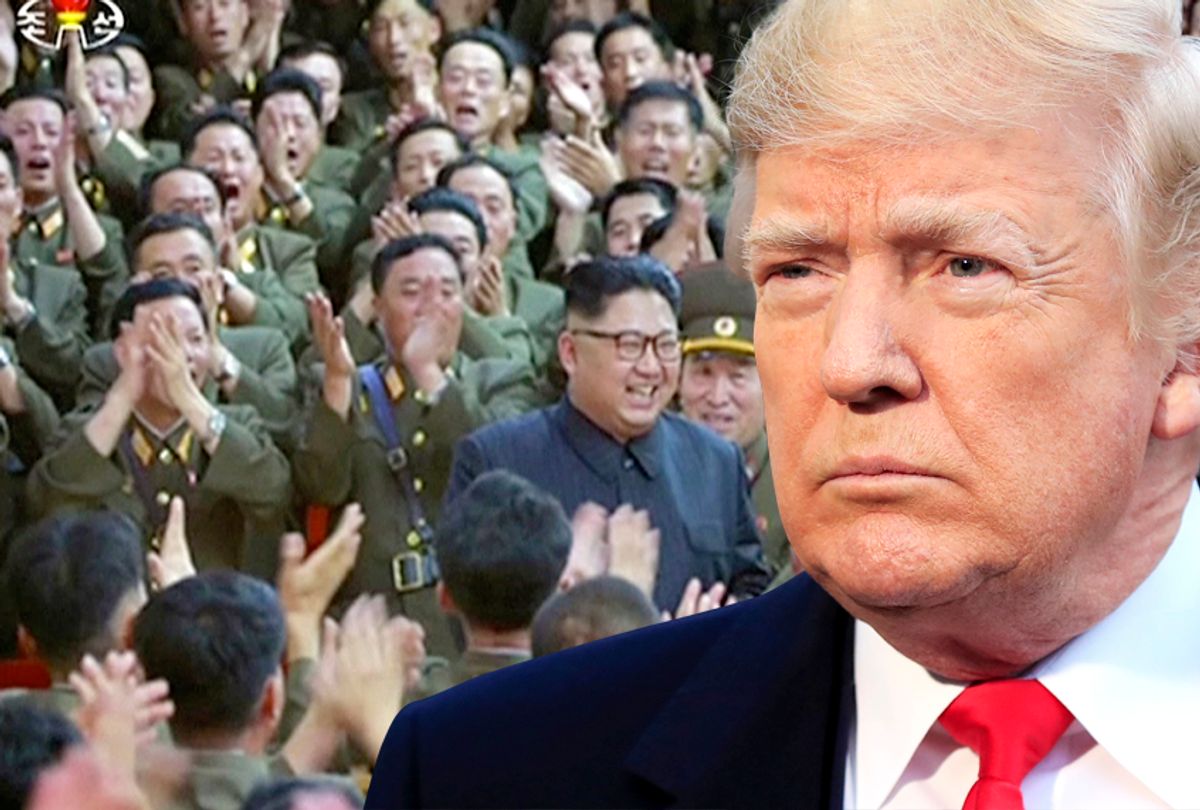 President Donald Trump is crowing on Twitter about the recent peace summit between North and South Korea, despite the fact that he had little to nothing to do with the meeting and that the lasting nature of the peace itself is in question.

The leaders of North Korea and South Korea — Kim Jong-un and Moon Jae-in, respectively — made their historic agreement in the South Korean village of Panmunjom. The agreement includes a mutual agreement to denuclearize in return for peace, though no concrete steps were outlined. In that vein, the two nations said they would pursue talks with the United States by the end of the year that can bring about an end to the Korean War. Although that conflict is usually described as having lasted from 1950 to 1953, the war was never officially declared to be over. It was resolved with a ceasefire, but no formal peace treaty was ever signed.

In a statement released after their mutual meeting, both Mr. Kim and Mr. Moon declared that "South and North Korea confirmed the common goal of realizing, through complete denuclearization, a nuclear-free Korean Peninsula." They emphasized a mutual desire for peaceable relations between the two hostile countries, a fact that was underscored by Kim's mere presence in South Korea. He was the first North Korean leader to ever set foot on South Korean soil and established throughout the meeting a friendly tone that was in marked contrast to the tensions which have defined interactions between the two nations for decades. Moon promised to visit the North Korean capital next year.

The tone of the Moon-Kim session — broadcast live nationally on South Korean television — was convivial and at times jocular, with Mr. Kim showing surprising honesty about the differences in conditions between the two nations.

Yoon Young-chan, Mr. Moon’s spokesman, said Mr. Kim acknowledged the poor road conditions in his country, a startling admission for a member of his ruling family, which is considered godlike and faultless among North Koreans. Mr. Kim also revealed that the North Koreans who visited the South during the Winter Olympics in February all admired the bullet train there.

After Mr. Moon spoke of wanting to visit North Korea, Mr. Kim said, “It will be very embarrassing,” alluding to roads there.

Mr. Kim also repeated a lighthearted line he had used in his meeting with South Korean envoys in Pyongyang, the North Korean capital, last month, apologizing to Mr. Moon for disturbing his sleep with missile tests and forcing him to attend meetings of his National Security Council.

“I heard you had your early-morning sleep disturbed many times because you had to attend the N.S.C. meetings because of us,” Mr. Kim said. “Getting up early in the morning must have become a habit for you. I will make sure that your morning sleep won’t be disturbed.”

Mr. Moon joked back: “Now I can sleep in peace.”

This isn't to say that the Korean peace process will be easy to implement.

There have been a number of other occasions when North Korea and South Korea have pledged peace and it hasn't ultimately worked out, which dampens enthusiasm in some circles about the prospects for this peace process. As Nicholas Eberstadt, the founding director of the Committee for Human Rights in North Korea, explained in an editorial for The New York Times:

Fighting in the Korean War ended in 1953 with just an armistice, and South Korean officials are calling for a “permanent peace.” But it is not merely unrealistic to hope that Kim Jong-un, the leader of the North, will offer the South real and lasting peace; it is delusional.

If the past is any guide, the North will offer the South unenforceable verbiage. And if the South accepts a phony peace ploy, it will expose itself to more manipulation by the government in Pyongyang — not only in its domestic politics, but potentially also in its alliance with the United States.

In addition, China is expected to demand that America withdraw its troops from South Korea as part of any peace treaty, and it is hard to anticipate how President Trump would react to that request. On a deeper level, the biggest obstacle to the upcoming peace process is the giant question mark posed by Trump's impending summit with Kim, which is expected to occur in May or June.

"The challenge, for President Trump, will be that at the end of the day, even if he goes through with the summit, it's very unlikely that the North Koreans will agree to make significant concessions related to their nuclear program. Previous administrations have been through this cycle of escalation and negotiations in the past, and it hasn't produced any significant change in the trajectory of North Korea's weapons of mass destruction or its missile programs," Jamie Fly, a foreign policy expert with the German Marshall Fund who served as a foreign policy adviser to Sen. Marco Rubio's 2016 presidential campaign, told Salon earlier this month.

Fly added at the time that if Trump "comes out of the summit without any significant offers by the North Koreans, I think he's going to face a tough choice pretty quickly of whether he continues the pressure campaign through additional sanctions and economic pressure. But given his rhetoric in the past, he may have to face expedited consideration of various military options."

Laura Rosenberger, who also works at the German Marshall Fund and was a foreign policy adviser for Hillary for America, shared a similar thought.

"What Trump has done here is put that [meeting] at the front, without a clear sense of what the agenda is, having given up the leverage we would have by the fact of this meeting. That means the stakes here are extraordinarily high. The consequences of failure are quite significant, in the sense that ... once you have a meeting at the presidential level, you don't have much runway after that," Rosenberger told Salon.

She added, "One of the things that worries me is that if there is failure to reach agreement on at least the process moving forward — I can't imagine under any circumstance that they reach meaningful agreement on anything other than broad platitudes at the table — you need agreement on a process to work out these issues after the meeting. If that doesn't come about, given what we have already seen from this administration I think we risk falling off the cliff to a military option."