Donald Trump's creed of greed: Product of a society that puts profit before people

Trump is a product of the twisted worship of wealth. Can he cure us of our misguided faith that greed is good? 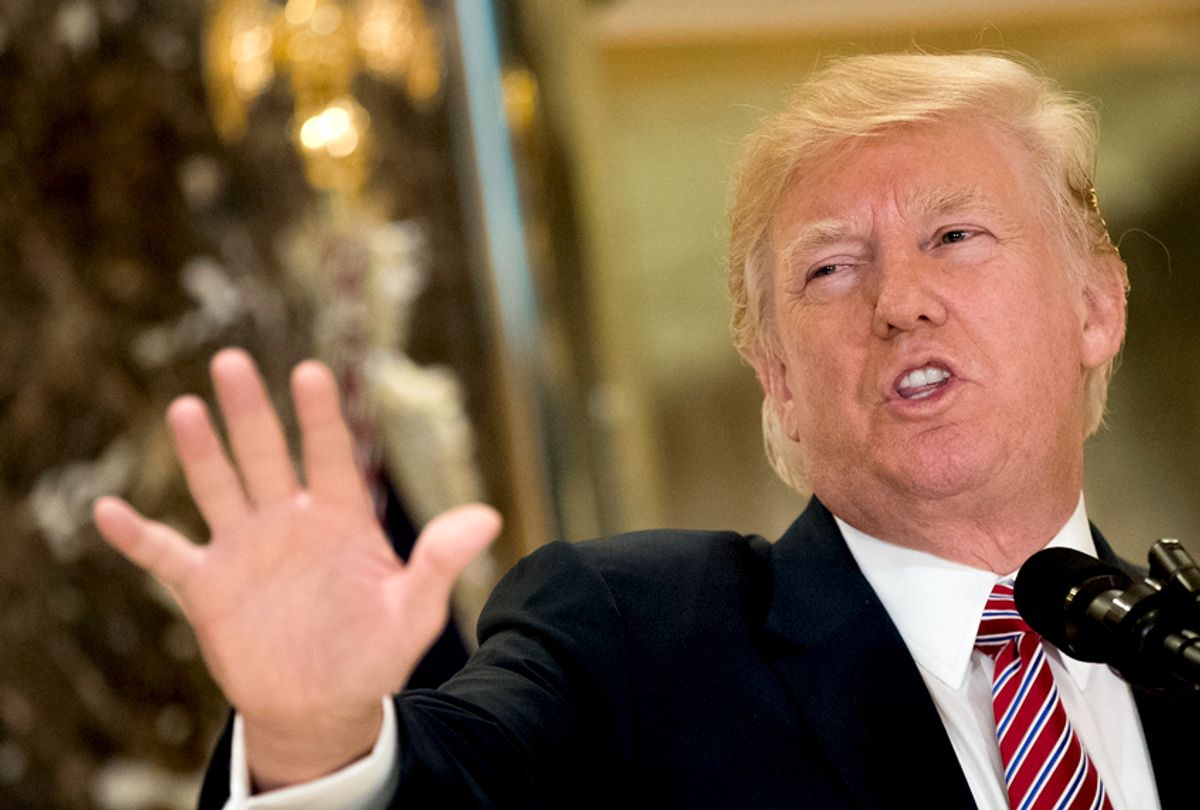 If there is one phrase that captures the personal philosophy that has guided Donald Trump throughout his life and presidency thus far, it may well be the infamous words of Gordon Gekko, the villain played by Michael Douglas in Oliver Stone's classic film "Wall Street": “Greed is good.”

The president has long subscribed to this philosophy of greed, and during his campaign in 2016 he boasted about his own greediness as if it were a virtue: “I like money. I’m very greedy. I’m a greedy person. I shouldn’t tell you that, I’m a greedy -- I’ve always been greedy. I love money, right?” It quickly became evident why Trump — who claims to be Christian, even though Christian dogma clearly states greed as one of the seven deadly sins — was bragging about his greed when he went on to declare that he wanted to be “greedy” for America. “I want to be greedy. I want to be so greedy for our country.”

This rhetoric was consistent with his campaign pledge to run the United States government as he ran his business, which appealed to many voters who have been hoodwinked into believing that running a country like a for-profit company is the solution to all our problems. This notion, along with the belief that businesspeople have unique abilities that qualify them to run a country, has long been prevalent in America, but it became increasingly popular toward the end of the 20th century.

In the 1980s — the decade when Trump went from being the ultra-privileged son of a wealthy real estate developer to the national poster boy for hedonism, avarice and vice — supply-side economics went from being a fringe ideology to the core doctrine of one of the major parties in America. It was the age of greed, and billionaires and businessmen like Trump became celebrities in their own right, being hailed as “job-creators” and “masters of the universe.” The ethos of this era is captured in the rest of Gekko’s famous speech:

Greed is good, greed is right, greed works. Greed clarifies, cuts through and captures the essence of the evolutionary spirit. Greed, in all of its forms … has marked the upward surge for mankind, and greed [will save] that other malfunctioning corporation called the USA.

This philosophy of greed that came to dominate American culture in the final decades of the 20th century had various antecedents, whether it was the social Darwinism of the late 19th century (popular with the robber barons) or the “objectivist” philosophy of novelist Ayn Rand, who preached the “virtue of selfishness” in the mid-20th century (a philosophy that “is nearly perfect in its immorality,” as Gore Vidal wrote).

At the heart of supply-side economics is a kind of hero worship of the wealthy that was famously displayed in Rand’s tedious (yet astonishingly popular) novel “Atlas Shrugged,” a paean to the capitalist class that envisioned what would happen if the capitalists (i.e., the producers) went on strike against the “parasites” and “looters” — that is, working people and evil bureaucrats. There is no doubt that Donald Trump sees himself as a character right out of a Rand novel, though more Howard Roark than John Galt. Indeed, of the three books that Trump has spoken about liking (yes, three!), Rand’s “The Fountainhead” was one (the other two being his own ghostwritten book, "The Art of the Deal," along with the Bible). “It relates to business, beauty, life and inner emotions. That book relates to … everything,” the president has said of Rand’s second novel.

In modern America, this Randian veneration of the wealthy has become the norm, even if most people have never heard of John Galt. Though the U.S. is known as the most religious country in the developed world, as a society America worships money more than anything else. To be wealthy is to be successful, smart and superior, and thus to be greedy and selfish is a virtue, not a sin. The profit motive is the guiding principle, the invisible hand the golden rule.

It is no wonder, then, that those who succeed in the private sector are often held in higher regard than those who work in the public or nonprofit sectors. Trump’s billionaire status made him uniquely qualified to run the country and fix that “malfunctioning corporation” known as the U.S. government. After all, if he could make a fortune in the world of business, surely he could turn things around in  government, where parasitic bureaucrats, politicians and so-called “experts” have long run things (notice the deep anti-intellectual thread that runs through this worldview).

Trump’s election was a chance to put this popular belief — that the government should be run like a business, and that successful businesspeople are more capable of leading a country — to the test. Trump has filled his administration with fellow billionaires and businessmen (and they are almost all men), while applying his famous business acumen to the presidency and carrying out a supply-side agenda that favors big business and billionaires like himself (that is, the “job-creators”).

The result? The Trump administration is already one of the most corrupt and scandal-ridden administrations in the history of the United States. “More than at any time in history,” write Joy Crane and Nick Tabor in a recent New York magazine article documenting Trump’s corruption, “the president of the United States is actively using the power and prestige of his office to line his own pockets: landing loans for his businesses, steering wealthy buyers to his condos, securing cheap foreign labor for his resorts, preserving federal subsidies for his housing projects, easing regulations on his golf courses, licensing his name to overseas projects, even peddling coffee mugs and shot glasses bearing the presidential seal.”

“Not since the Harding administration, and probably the Gilded Age, has the presidency conducted itself in so venal a fashion,” declared their New York magazine colleague Jonathan Chait. Former FBI director James Comey, meanwhile, has compared the president to a mob boss in his new bestselling book, writing that Trump's leadership is “ego driven and about personal loyalty.” The man who promised to “drain the swamp,” in other words, has filled it with the most monstrous swamp creatures imaginable (along with his family members).

Of course, this was all predictable. Throughout his life Trump has been driven by greed and self-interest, and in the world of business this mentality has served him well. As the owner of his own company, Trump ran things with an iron fist, which partly explains his authoritarian style and why he has had such a difficult time adjusting to running a democratic government where his power is limited by checks and balances. Trump’s corrupt and self-serving administration should put to rest the notion that government ought be run like a private, for-profit company, or that managing a business (or, better yet, having a lot of money) qualifies one to run a country. Of course, it probably won't.

Donald Trump is the product of a society that values monetary success over all other forms of achievement (e.g., intellectual, creative, etc.), where the philosophy of greed has become the dominant ideology. This philosophy is established on Adam Smith’s concept of the invisible hand, which famously posits that when each individual pursues his or her own narrow self-interests — i.e., pursues profit — all those decisions unintentionally benefit society as a whole. This theory is true up to a certain point, and there is no doubt that capitalism has produced immeasurable wealth and technological innovations that have improved the lot of countless people over the past few centuries.

Yet Smith introduced the theory of the invisible hand long before globalization and the rise of multinational corporations, when most commodities were still being produced by local artisans, farmers and so on. As wealth has become increasingly concentrated with industrialization, the profit motive has created twisted incentives that often lead to psychopathic behavior. This was recently displayed in a Goldman Sachs report on gene therapy that pondered whether curing patients was a sustainable business model:

“The potential to deliver ‘one shot cures’ is one of the most attractive aspects of gene therapy, genetically-engineered cell therapy and gene editing. However, such treatments offer a very different outlook with regard to recurring revenue versus chronic therapies,” wrote the analyst, as reported by CNBC. “While this proposition carries tremendous value for patients and society, it could represent a challenge for genome medicine developers looking for sustained cash flow.”

When profit clashes with potential societal benefits, there is little doubt that corporations — whose sole purpose is to make profit — will choose profit over people. This is one of the major criticisms that universal health care advocates direct at the current health care system in America, which is based on the profit motive. (In most other developed countries, health care is understood as a public service.) At least one of the reasons why the U.S. still has a private, for-profit health care system is because the philosophy of greed is so entrenched in our way of thinking.

The psychopathic behavior inspired by the profit motive is demonstrated daily by President Trump. Indeed, Trump embodies the philosophy of greed more than even Gordon Gekko. Of course, Gekko was a fictional character dreamed up by a left-wing, muckraking filmmaker who had hopes his revolting creation would expose the greed on Wall Street and have a moralizing effect. Unfortunately, the culture of greed has only proliferated since then. Perhaps the real-life poster boy for greed will have more of an impact now that he is president of the United States.