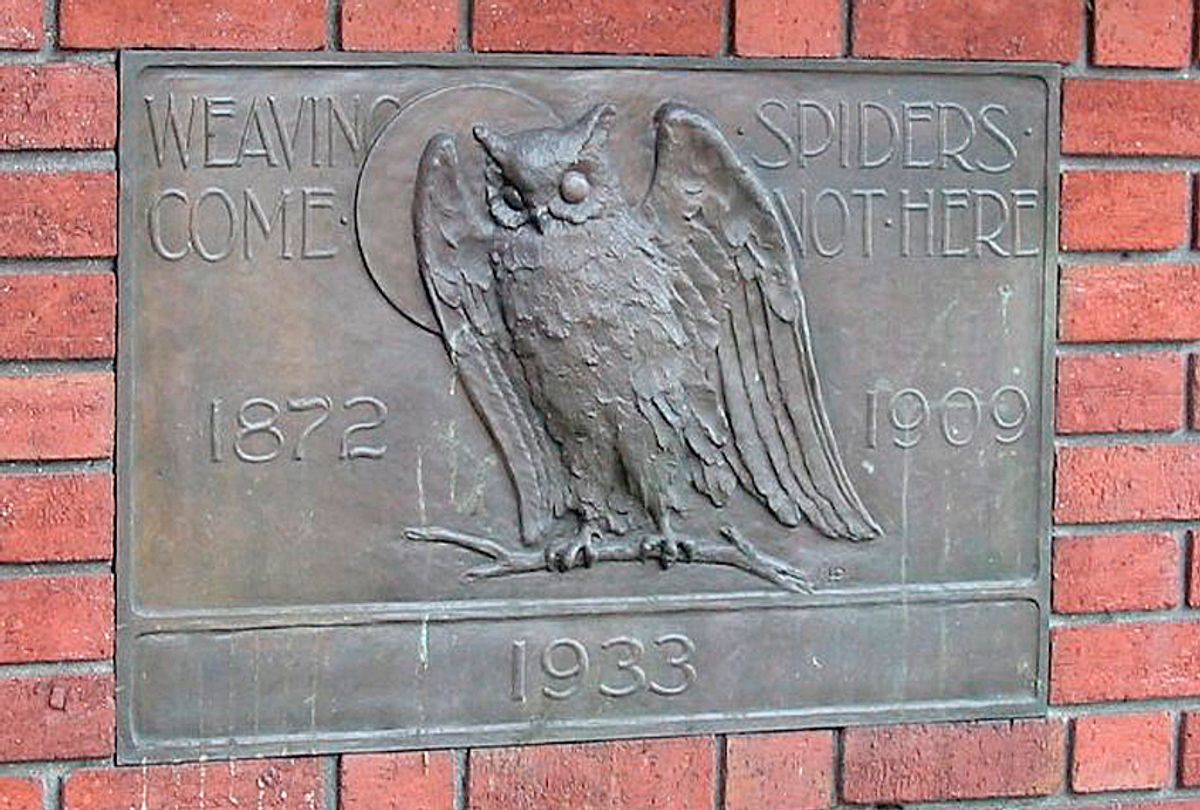 The average initiation fee is rumored to be $40,000 per member. Then there’s a quarterly fee—if you don’t spend it, you’re charged for it anyway. Women aren’t allowed to join or step on the premise—with a few exceptions, such as the occasional “ladies’ night.”

This is the elite Bohemian Club, a male-only private club in the heart of San Francisco, and an infamous haunt of many a prominent American neoconservative. Past members have reportedly included some of the country’s most conservative and wealthy men — including Henry Kissinger, Colin Powell, and former presidents such as Richard Nixon, Dwight Eisenhower, and George H. W. Bush — yet little is known about what goes on behind its closed doors, and at its annual Bohemian Grove summer retreat, due to its exclusivity. The club’s secrecy have prompted many on the right and left to forge conspiracy theories about what goes on behind closed doors, and what is the symbolism behind the many owl statues and reliefs on its premises.

Yet like any elite institution, the Bohemian Club requires labor to function — workers who, behind the scenes, serve the neocon members as they wine, dine, and plot war. This week, the club’s workers rather than its members have been in the spotlight. For two days, nearly 100 Bohemian Club workers—from dishwashers to cooks to servers to front desk attendants—picketed in front of the downtown San Francisco club, demanding higher wages, a right to secure healthcare benefits, improved pensions, and most importantly, having access to the union.

“We have been meeting for a couple years now, secretly, so management wouldn’t give them [the workers] a hard time,” Lorraine Powell, an organizer and Director of Food Service at UNITE HERE! told Salon. “We have had to meet people in their homes, outside the club...  it isn’t something that hasn’t existed in any other property that we represent.”

Powell told Salon that while the picketing ended at 11pm on Friday night, the fight isn’t over.

“We are planning on continuing to take actions if things aren’t moving forward,” she said.

Qudratullah Afshar, who has worked at the Bohemian Club for 27 years, told Salon he makes $18.25 an hour, as a busser and server — a far cry from the reportedly $40,000 fee that members pay per year.

“I cannot live with that,” he said, adding that he has a second job to make ends meet. He commutes every day from San Leandro, an East Bay suburb south of Oakland and 21 miles from downtown San Francisco.

Those who work in the Bohemian Club aren’t allowed to receive tips from the wealthy people they serve. Powell said if a worker accepts a tip, he or she might be fired.

Afshar told Salon that his biggest hope was to gain health insurance for his children — and a sense of stability. Health insurance is indeed hard to come by in America’s service industry.

“If I go somewhere else [I] start from scratch,” he said. “If I go anywhere else, there’s no guarantee that I work.”

Afshar said while the members are amiable — he wasn’t able to say much more due to the club’s secrecy — management is a different story.

“The members treat us very nice, they are nice, but not the management,” he said. “Management is really totally different.”

Afshar explained that the working conditions in the club resemble a surveillance state, with  cameras in nearly every corner. He described the inside like San Quentin State Prison.

“Yes there are cameras all over. In the coat room...even on top of the dishwasher,” he said. “It’s not right.”

Powell told Salon that a front-desk worker only recently got a chair. Previously, they did not have the option to sit during at all during an eight-hour shift.

“That is a California law,” she said. “You are supposed to have access to a chair.”

“I’m doing it [the strike] because I want to keep healthcare,” Guzman told Salon. “I want to secure it, and the pension, that is really important for me and my family and my kids.”

“Living in San Francisco, it is hard to live on these wages,” he said.

Then there’s the issue with the workers joining a union. However, the authorization to strike passed with a 93 percent “yes” vote.

“I think here, the issue with the union is that they [management] don’t like the union,” Guzman said. “They are trying to keep the union out — for me, I have a close relationship with the members, they like us, they say thank you, but for some reason we can’t find the contracts. We don’t have a lot things.”

The workers have gone without a contract since 2011. They are returning to work today, yet it remains to be seen if the dispute will continue.