"The Handmaid's Tale," "Black Mirror" and the bleak future of abortion on TV

It's not just Gilead's regressive dystopia — too frequently, futuristic TV looks back at abortion, not forward 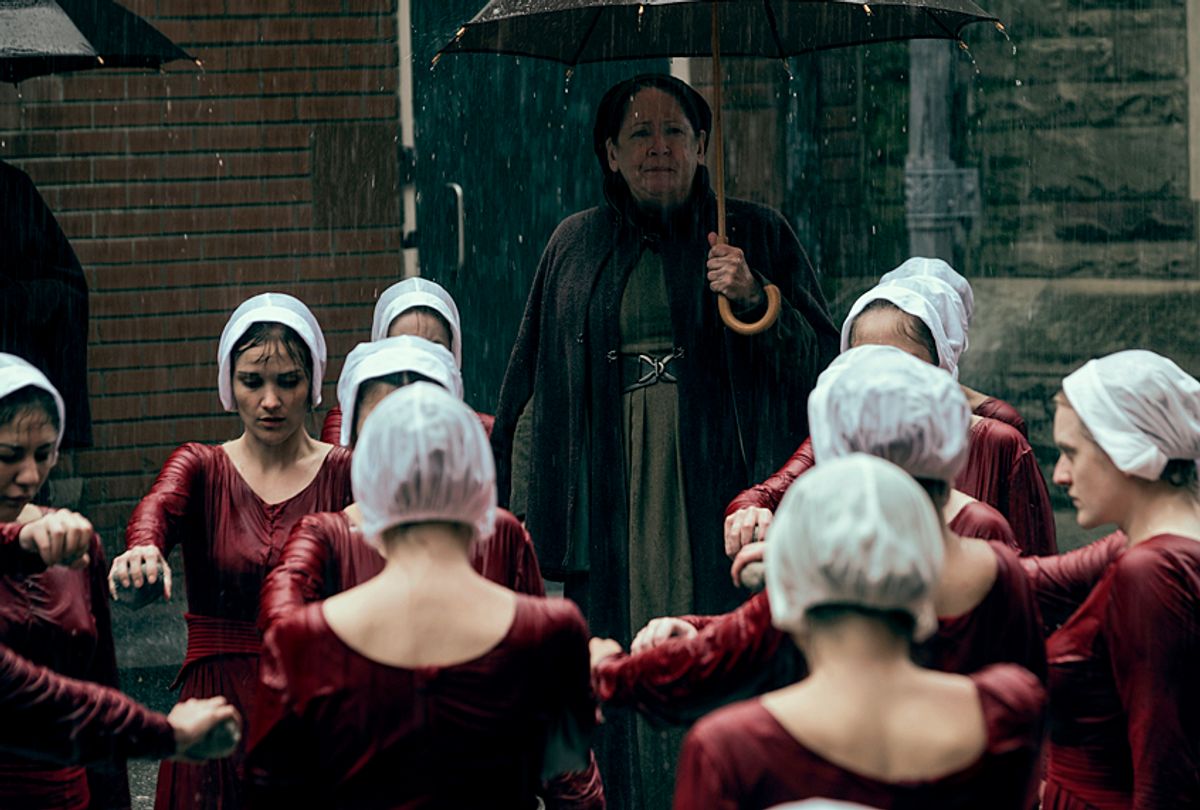 Viewers return to the Republic of Gilead this week, as "The Handmaid’s Tale" begins its second season on Hulu. This season, the map of Gilead will extend beyond the imagined limits of Margaret Atwood’s 1985 novel, from the toxic concentration camps of the Colonies to the gallows installed in the outfield of Fenway Park. The show’s incorporation of these hauntingly familiar visuals, and its allusions to modern technological standbys like Uber, Tinder and Craigslist, brings to life the most disturbing aspect of Atwood’s original work: this future is real enough, and near enough, to make audiences feel that this could be our reality. And this could-be reality rests entirely on the absolute regulation of women, their bodies and their reproduction.

The renewed reception to the decades-old "The Handmaid’s Tale," along with the popularity of Leni Zumas’s current bestseller Red Clocks, shows audiences seeking out dystopian stories that, in many ways, reflect and respond to our current political landscape, including escalating attacks on reproductive rights. These, and other stories like them, portray worlds in which women’s ability to control their own reproduction, and particularly to access safe abortion, is nonexistent. In this, grim and unjust futures typify the fictional offerings — at least as far as abortion is considered.

Television, as an important vehicle of contemporary storytelling, has fallen short in the narrow way it depicts futuristic abortion. Abortion is often illegal, not only in dystopian futures — which serve to alert viewers to the dangers of authoritarianism and oppression — but in science fiction stories broadly.

On the short-lived "Defying Gravity" (2009), set in 2052, an astronaut meets an illegal abortion provider in a bar to access pills that cause her to hemorrhage and lose her fertility. On "Battlestar Galactica" (2006), the president issues a politically-charged decree making abortion illegal, after a refugee seeks an abortion — a plotline that disturbingly anticipated current political realities.

Unfortunately, even in fictional futures where abortion is legal, portrayals are often inaccurate; not in ways that suggest new thinking about abortion, but ways that are factually incorrect. Most recently, "Black Mirror" (2017) conflated emergency contraception and the abortion pill and depicted it administered coercively.

More generally, though, abortion depictions are simply uncreative. "Black Mirror," "Star Trek: The Next Generation" (1988) and "Continuum" (2013) all offered novel ways of portraying other procedures around pregnancy (3D hologram ultrasounds, an implant and tablet that detects pregnancy immediately, a home pregnancy test that tells you weeks of gestation and sex and displays a sonogram on your bathroom mirror), yet for characters considering abortion, the procedure still looks similar to today (pills from a doctor, a clinic visit, figuring out how to get money to cover the cost).

When it comes to abortion plotlines on television, science fiction is one of the most underrepresented genres, and even when we do see sci-fi abortion stories, the plotlines are usually regressive. In universes that include holograms, transporters and space travel, we should expect show writers to imagine abortion access just as creatively.

Dystopian and science fiction stories create alternative futures for viewers and invite them to visualize what could be. As abortion restrictions in the real world erode access to clinic-based care, fictional depictions could portray service delivery alternatives, transcending regulations and restrictive regimes.

Screenwriters could consider what contemporary efforts to expand telemedicine and safe self-managed abortion might mean in another century. Or, they could draw inspiration from avant-garde European activists who use flying drones to defy restrictions, and gravity, when delivering abortion pills across international borders to women in Northern Ireland and Poland. They could pioneer abortion innovations for people on distant planets, in rural communities, or those immobilized by disability or finances — if their imaginations were stretched beyond stigma.

Right now, it would seem the truth is stranger than fiction. If financial and logistical barriers don’t hinder fictional space and time travel, why do they still hinder abortion access?

The dire warnings of "The Handmaid’s Tale" have already inspired action and protests across the country. Stories set in the future offer viewers a way of imagining what can be and suggest where innovation can take us. But, when it comes to abortion, the focus is consistently on dystopian warnings rather than future progress. If storytellers could envision abortion untethered to the constraints of contemporary medicine, technology and politics, what better, more hopeful vision might await us?

Gretchen Sisson, PhD, is a research sociologist at Advancing New Standards in Reproductive Health (ANSIRH). She leads ANSIRH’s Abortion Onscreen project, which studies portrayals of abortion in American film and television and their effects on broader social perceptions of abortion.

Renee Bracey Sherman is a writer and activist committed to the representation of people who’ve had abortions at the intersection of race and class. She is a member of Echoing Ida, a Black women’s writing collective, and her writing has been featured in The New York Times and The Guardian.