Sen. Lindsey Graham of South Carolina speculated that liberals would "kill themselves" if Trump won the prize 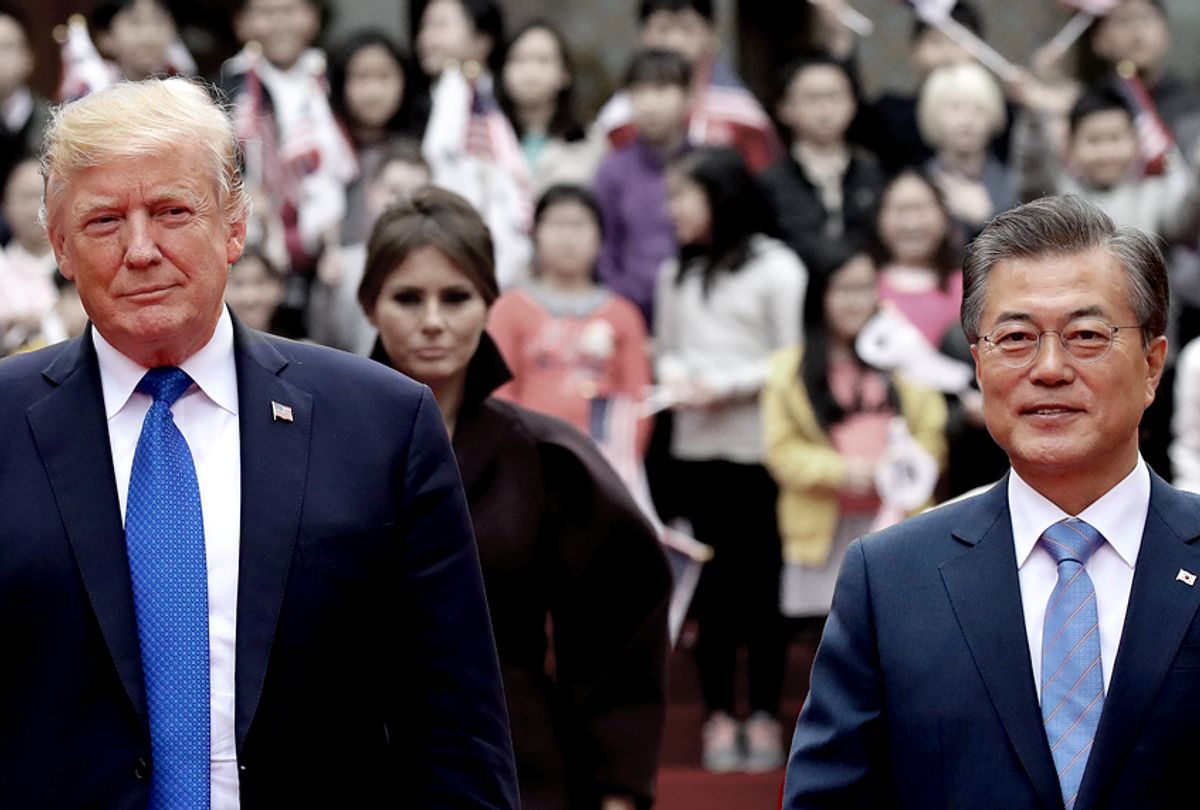 Should that actually happen? Perhaps — if Trump can deliver results after his upcoming meeting with Kim Jong-un. In other words, if Trump actually does something helpful to spur the peace process.

"President Trump should win the Nobel Peace Prize. The only thing we need is peace," Moon told his aides during a meeting on Monday, according to The Washington Post. The compliment may not have been unsolicited, at least in the direct sense. After North Korea made evident its desire to talk to South Korea in January, Trump claimed that it was because of his own tough policy toward the wayward dictatorship. A few days later, Moon confirmed that Trump deserved credit for the then-impending talks, saying during a news conference in Seoul that "I give President Trump huge credit for bringing about the inter-Korean talks, and I’d like to thank him for that."

It later turned out that Trump had asked Moon to give him public credit for making the talks possible, according to a report at the time by the Post.

While it is unclear whether Trump made a similar request of Moon this time around, it stands to reason that his earlier request for public acknowledgment of his efforts could have influenced the South Korean president's decision to call for a Nobel Peace Prize for the American president.

Moon Jae-in wasn't alone in calling for Nobel Peace Prize recognition for the president. Over the weekend, Trump did little to quell the enthusiasm of a crowd that chanted for him to be awarded the prize as a result of the talks in Korea. As the Post reported:

At a rally in Michigan on Saturday, Trump demurred when he started talking about North Korea and members of the audience began chanting “Nobel! Nobel!”

“That’s very nice, thank you,” Trump said. “I just want to get the job done.”

But he also again took the credit for bringing North Korea to the table with his “maximum pressure” policy.

One of the “fake news” outlets had asked what Trump had to do with the North Korean talks, the president told the crowd. “I’ll tell you what. Like, how about, everything,” he said.

Sen. Lindsey Graham, R-S.C., also mused on Sunday that Trump should possibly win the Nobel Peace Prize. This is a notable turn for Graham, who has mostly distinguished himself as one of the few Senate Republicans willing to be an outspoken critic of the president.

"I think Trump has convinced him [Kim Jong-un] that the only way his regime will survive is for them to give up their nukes and in return to end the Korean War so North Korea can have a more normal economy," Graham told Fox News' Maria Bartiromo.

Graham then claimed that "President Trump, if he can lead us to ending the Korean War after 70 years and getting North Korea to give up their nuclear program in a verifiable way, deserves the Nobel Peace Prize and then some."

Graham also added, "I want to be there. It may be the first time the Nobel Peace Prize was given and there was mass casualties because I think a lot of liberals would kill themselves if they did that. But the bottom line is, by any objective measure what President Trump has done is historic."

Much as it may pain liberals to admit it, Trump will indeed have achieved something historic if he is able to bring about a lasting and meaningful peace between North and South Korea. It is not unreasonable to say that he would deserve the Nobel Peace Prize for an achievement that Dwight Eisenhower, John Kennedy, Lyndon Johnson, Richard Nixon, Gerald Ford, Jimmy Carter, Ronald Reagan, George H.W. Bush, Bill Clinton, George W. Bush and Barack Obama were all unable to pull off.

At the same time, the task is nowhere near complete. And as Salon learned when it spoke with North Korea policy experts from both parties earlier this month, Trump will have his work cut out for him when he meets with Kim Jong-un at some point in the next few weeks.

"Previous administrations have been through this cycle of escalation and negotiations in the past, and it hasn't produced any significant change in the trajectory of North Korea's weapons of mass destruction or its missile programs," Jamie Fly, a North Korea expert who served as foreign policy adviser to Florida Sen. Marco Rubio during the 2016 presidential campaign, told Salon earlier this month.

Fly added that if the president "comes out of the summit without any significant offers by the North Koreans, I think he's going to face a tough choice pretty quickly of whether he continues the pressure campaign through additional sanctions and economic pressure. But given his rhetoric in the past, he may have to face expedited consideration of various military options."

Laura Rosenberger, who worked as a foreign policy adviser for Hillary for America, had similar thoughts at the time.

"What Trump has done here is put that [meeting] at the front, without a clear sense of what the agenda is, having given up the leverage we would have by the fact of this meeting. That means the stakes here are extraordinarily high. The consequences of failure are quite significant, in the sense that . . . once you have a meeting at the presidential level, you don't have much runway after that," Rosenberger told Salon.

She added: "One of the things that worries me is that if there is failure to reach agreement on at least the process moving forward — I can't imagine under any circumstance that they reach meaningful agreement on anything other than broad platitudes at the table — you need agreement on a process to work out these issues after the meeting. If that doesn't come about, given what we have already seen from this administration I think we risk falling off the cliff to a military option."

None of these comments, which came weeks before the meeting between Kim and Moon, imply that what has happened between the North Korean and South Korean leaders wasn't historic. That said, because Trump has talked tough about North Korea in the past and then agreed to meet with Kim Jong-un -- a major diplomatic concession, and something no previous president has even seriously considered -- there is an immense burden on the president to make sure the North Korean regime doesn't wind up taking him for a ride.