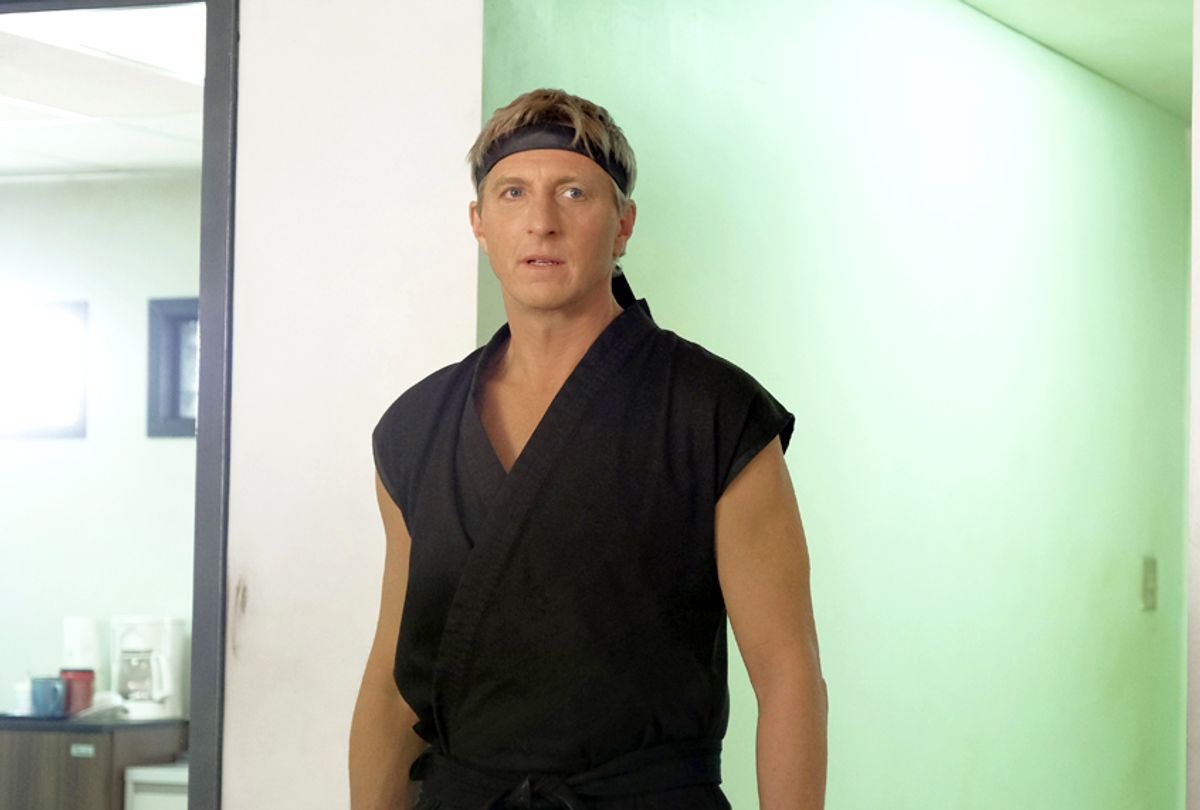 Near the beginning of "Cobra Kai" the downtrodden Johnny Lawrence (William Zabka) ends a humiliating day by watching an edited-for-TV broadcast of the jingoistic 1986 action flick "Iron Eagle."  Very little about "Iron Eagle" is designed to tug at one's heartstrings, and yet witnessing one scene brings Johnny to the verge of tears.

"Iron Eagle" occupies a modest place within the cheese department of the '80s action flick pantheon, and knowing this makes watching the villain of "The Karate Kid" weep at the sight of it just shy of genius. A miserable example of lost game recognizing lost game.

By that point in the YouTube Red series, available on Wednesday, we can see that Johnny is clinging the vestiges of his golden years by the quicks of his fingernails. He drives a Pontiac Firebird that, like him, has seen better days; incredibly, he stills acts like it's a chick magnet. He treats his middle-aged physique and his liver as if they belong to a 17-year-old in peak condition.

Obviously his best years are long gone. In fact, they all seem to have come before Daniel LaRusso (Ralph Macchio) kicked him in the face more than 30 years ago.

And this makes that "Iron Eagle" detail as funny as it is poignant. Just like Johnny, "Iron Eagle" is an "also ran" of popular culture. "Top Gun" came out a few months afterward and became a classic, proving that being there first doesn't matter if something better comes along.

Such a fleeting moment is one of many that speak to the meticulous construction of "Cobra Kai," a 10-part continuation of the "Karate Kid" storyline that began in 1984, co-created by Josh Heald, Jon Hurwitz and Hayden Schlossberg.

Picking up the "Karate Kid" story three decades after that fateful Under-18 All-Valley Karate Tournament gives the "Cobra Kai" producers and stars an opportunity to use Johnny's and Daniel's lives to explore the ways that our early mentors can guide or misshape our destinies. Daniel had Mr. Miyagi (the late Pat Morita), but most people forget that Johnny learned at the feet of John Kreese (Martin Kove), a ruthless man who taught his students to do anything it takes to win.

Hurwitz and Schlossberg are the minds behind "Harold and Kumar Go to White Castle," and they employ the same subversive tactics in making "Cobra Kai." That is, they've taken an appealing conceptual kernel and cooked it into something heartier, expanding upon a Reagan-era underdog tale in a way that speaks to America in 2018.

While the writers make it clear that Johnny's troubles are of his own making, we also get the sense that the one-time golden boy never received help in recovering from his hard fall. Meanwhile, under Mr. Miyagi's tutelage Daniel learned what it means to be a man, to take care of one's family, and as a bonus, he got a trip Japan.

Three decades later Daniel is a wealthy owner of a chain of car dealerships and repair shops in the San Fernando Valley while Johnny can barely keep a job. Daniel sips martinis at tony country club functions and lives in a beautiful mansion; Johnny ends every day getting drunk on Coors before passing out in his cheap apartment.

And it is during one of these depressive fogs that we see him cry at the sight of "Iron Eagle" in a fit of nostalgia for the old days. The film demonstrates the "strike first, strike hard, no mercy" ethos central to the Cobra Kai way of being, Johnny's way. The fact this does not prove true explains why the Johnny we meet in 2018 is rage personified: an absentee father, and a walking wreckage of casual racism and sexual frustration produced by thwarted entitlement and privilege.

Johnny comes across as a sort of #MAGA figure, at times. Certainly "Cobra Kai" is bound to inspire written analysis to that effect. But in the professed spirit of another recently revived '80s property, "Cobra Kai" isn't meant to cater to one political team or another — although unlike "Roseanne," its intent is far clearer.

Positioning one of '80s cinema's best known bullies as an anti-hero is a fierce hook, but what keeps "Cobra Kai" interesting is its conscientiously-rendered contrast of the kind of men Daniel and Johnny symbolize, separately and together.

Clearly Johnny is stand-in for guys mired in a retrograde view of masculinity, the kind of loathsome dude-bro many falsely hoped was on his way toward extinction. Daniel represents the high example of the capitalist ideal, a man who pulled himself up by his bootstraps and did everything the right way.

But even gentle Daniel — a loving husband, devoted father and all-round good guy — has unbearable qualities about him. During his first meeting with Johnny, he acts magnanimously only after humiliating his old rival. It's easy to assume that the past is in the past if history crowns you the winner.

In this way, "Cobra Kai" rebukes the common hero/villain binary.  Johnny's motivation for re-opening the dojo Daniel recognizes as a den of evil is less an act of spite than an act of protest against losing over and over again. We get it — and by "we" that refers to everyone. Johnny's first students are  fellow "losers," starting with a brown kid  (Xolo Maridueña) before other scarred, scrawny misfits follow. Initially Johnny cares less about them than he does about using them to polish his own abilities. His highest investment is in making Johnny Lawrence great again.

The thing is, Daniel isn't aware that he's standing against these outcasts, the people he should be closely identifying himself with. He's only familiar with the teens his daughter brings home, popular kids picking on their less fortunate schoolmates. Never does he consider that his old nemesis could be training those geeks and the nerds to defend themselves.

And why would he? He raised his daughter to be a good kid and trusts she's surrounded herself with the right kinds of people. Not thugs like Johnny Lawrence.

The two episodes made available for review allow Zabka to make the most of his star turn in "Cobra Kai," as he paints Johnny as a crumpled man stuck in a rut, who nevertheless begins down the path of doing some semblance of what we'd consider to be the right thing.

Macchio's terrific too, but anyone who has seen his work on "Ugly Betty" and "The Deuce" would expect nothing less. (He also serves as an executive producer for this series, as does Zabka.) Zabka is less familiar to TV viewers, save for roles requiring him to play some version of the Johnny we knew, or himself.  In "Cobra Kai" he straddles a line between stubbornness and pathos, convincingly evoking the type of angry suffering that strips a person down to raw metal. This is a pleasantly surprising to watch in this context, considering this is a show that basically owes its existence to an ongoing gag on "How I Met Your Mother" and a viral video-fueled meme.

Underneath its winks at the audience and in-jokes "Cobra Kai" also reminds viewers that the "The Karate Kid" is a film steeped in history, especially as it refers to America's collective self-image (This notion is most prominent in Mr. Miyagi's storyline; few if any other '80s blockbuster feature a major character who is an internment camp survivor). Mainly we're meant to identify with Danny's adolescent "Jersey tough" vision of himself, especially in the scenes when he plays the part of the chivalrous, outmatched knight ready to take the hit for his girl.

But we never got to know Johnny, save for his relationship with his vicious sensei and the rest of his blonde wolfpack.  Only in "Cobra Kai" can we appreciate that the Karate Kid and the boy he defeated are more alike than we thought back then. Perhaps upcoming episodes with expand upon that notion, depicting through one entertaining tale that it's possible for opposing tribes to find a common ground, starting in a small dojo in a mini-mall.

Even if we don't view it through these thematic prisms, there's no denying that "Cobra Kai" is a kick to watch, and that's really all that's required to declare it a winner.