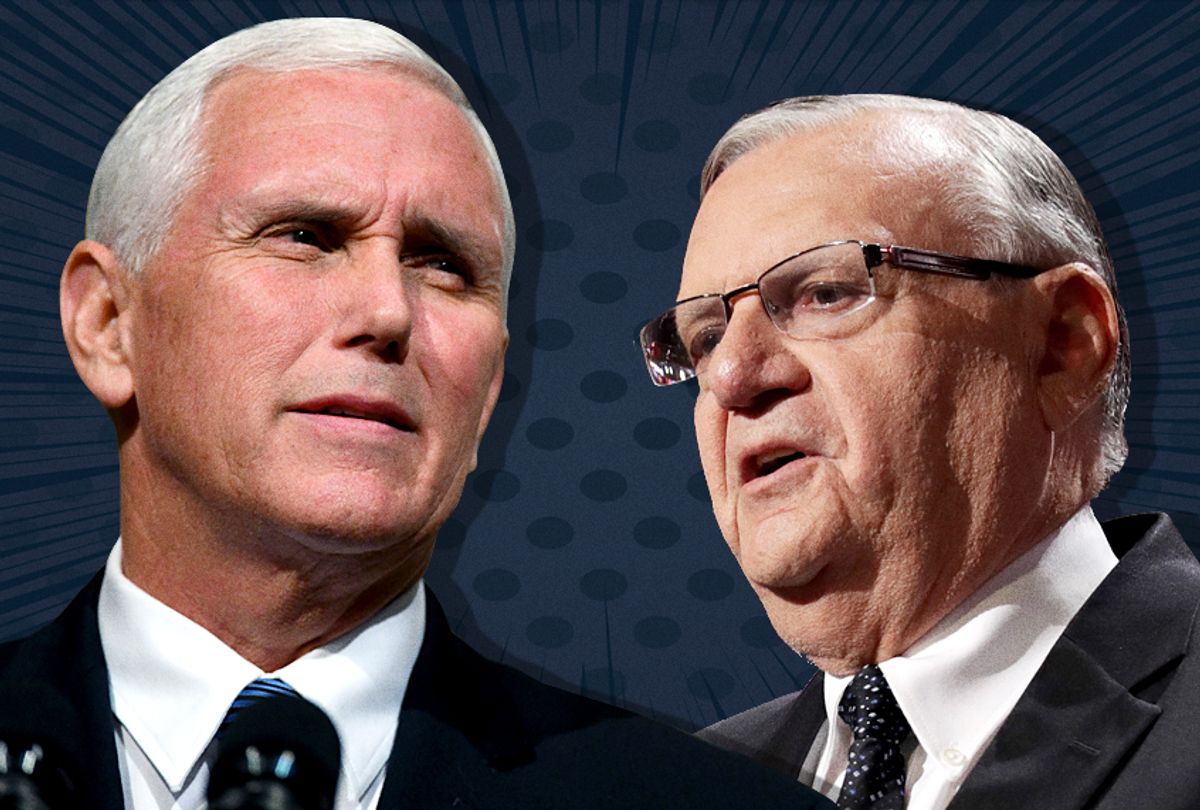 Vice President Mike Pence demonstrated one of the reasons why he is no better than President Donald Trump when he praised the disgraced former Maricopa Sheriff Joe Arpaio as "a tireless champion of strong borders and the rule of law" during an appearance on Tuesday.

"I'm honored to have you here."

Pence's glowing words for Arpaio were offered during an event promoting Trump's tax cuts in Tempe, Arizona, according to The Washington Post. The vice president, who apparently only learned Arpaio would be present at the event a short time before it kicked off, used the opportunity to pay tribute to the former sheriff, who is very popular figure among the far right.

"I just found out when I was walking through the door that we were also going to be joined by another favorite, a great friend of this president, a tireless champion of strong borders and the rule of law, who spent a lifetime in law enforcement," Pence told the cheering crowd.

The vice president added, "I’m honored to have you here."

The obvious irony here is that Arpaio was pardoned by Trump in August because of his actual lack of respect for the law. A month earlier, Arpaio was found guilty of criminal contempt, because he refused to follow a court order curtailing his use of racial profiling. In her order, Judge Susan Bolton declared that "not only did (Arpaio) abdicate responsibility, he announced to the world and to his subordinates that he was going to continue business as usual no matter who said otherwise."

In thanking Trump for the pardon, Arpaio described the conviction using a label that Trump himself has employed many times when he has been accused of wrongdoing — "witch hunt."

When pardoning Arpaio, Trump made it clear that he was doing so because he shared the man's racialized views on fighting undocumented immigration.

"Throughout his time as sheriff, Arpaio continued his life's work of protecting the public from the scourges of crime and illegal immigration. Sheriff Joe Arpaio is now 85 years old, and after more than 50 years of admirable service to our nation, he is (a) worthy candidate for a presidential pardon," Trump explained in a statement at the time.

Although the Trump-Pence administration clearly has a very positive opinion of Arpaio, some conservatives disagree with the notion that the former sheriff should be regarded as a hero.

"Considering the type of person Arpaio has shown himself to be, everything about Pence’s introduction regarding Arpaio was appalling," Sarah Quinlan, a conservative writer at RedState, declared in response to Pence's comments. "Arpaio’s injustices and abuses of his power are well-documented, to the point that he was convicted of criminal contempt of court in 2017 (for which he was then pardoned by President Trump)."

As examples of Arpaio's abuses, Quinlan cited how Arpaio forced some inmates to live ina so-called "Tent City," often did not persue sex crimes that were reported his office, "improperly marked approximately 80 percent of cases as solved without making any arrests or proper investigations," cost taxpayers millions of dollars in wrongful death lawsuits and used racial profiling on a regular basis, in particular targeting people of Hispanic descent who he claimed (sometimes incorrectly) were undocumented immigrants.

In addition to paying Arpaio a compliment that directly contradicts what has been confirmed about the man's character and legacy, Pence's remark is also troubling because it reveals another important fact: When it comes to adhering to terrifying right-wing political views, the vice president is no better than the commander-in-chief.

Pence is perhaps best known for his staunch opposition to LGBTQ rights, which he has made into one of the defining issues of his political career. While he was in Congress, Pence opposed protections for the LGBTQ community from discrimination in the workplace and the repeal of the policy known as "Don't Ask, Don't Tell," which banned gays from serving in the military. Pence also supported public funding of conversion therapy and fought to keep federal funding for HIV/AIDS treatments from being distributed to "organizations that celebrate and encourage the types of behaviors that facilitate the spreading of the H.I.V. virus."

As governor of Indiana, Pence garnered national attention after signing a bill that made it legal for businesses to refuse to serve members of the LGBTQ community. Although Pence eventually revised the law, the popularity that the measure garnered him among the religious right helped him get tapped as Trump's running mate during the 2016 presidential election.

State lawmakers who worked with Pence while he was governor of Indiana also recalled that he was an ineffective governor.

"I think that, in my lifetime, he's probably the worst governor we ever had," Democratic Indiana State Senator Karen Tallian told Salon last year. "I think Mike Pence made a mess of everything. He would throw out these sort of bombshell ideas and then leave them for his staff people to implement. And his staff people normally made a mess."

She added, "He did not have, in my opinion, really good staff. Now later, toward the end of his term, he brought on a few good people, but during the beginning of his term he was left with Mitch Daniels' [a previous Republican governor of Indiana] second string."

"While Mike Pence is a danger to progressive and even moderate visions for the nation, the numbing familiarity of his boilerplate would inspire more groans than screams. Every domestic speech will contain the words 'family, faith, and freedom' surrounded by some off-the-shelf Republican notions. Sanguine aides will carefully edit his remarks and tweets until they are sufficiently empty," Pelath said.

He added, "Mike Pence is a generically hard-right leader with theocratic lapel pin. We all knew Mike Pence before he was reincarnated from several generations of past Republicans."