How should female candidates deal with sexist attacks? Head on — by fighting back 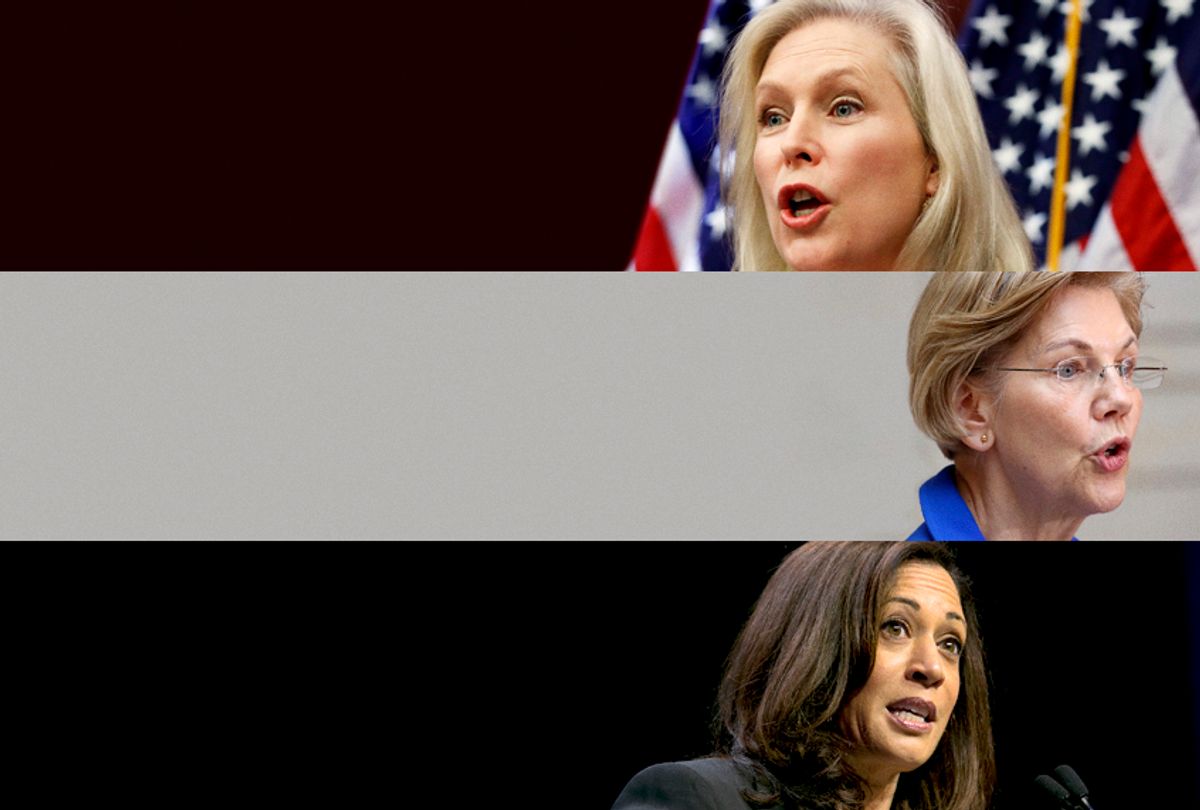 After the debacle of the 2016 election, huge numbers of women responded not by retreating into the shadows after Hillary Clinton's improbable defeat at the hands of a half-literate conman, but by sliding into pantsuits of their own and running for office. The 2018 midterm elections have already set a record: An unprecedented 309 women have filed paperwork to run for the House of Representatives this year. And the gossip mill regarding who the likely 2020 Democratic candidates for the presidency could be is dominated by women's names, including Sens. Kirsten Gillibrand of New York, Kamala Harris of California and Elizabeth Warren of Massachusetts.

This development, however, brings with it a serious question: How should female candidates deal with the sexism they will inevitably face?

After Clinton's loss, the question is perhaps even more pressing. No serious person can doubt that sexism was an enormous factor in the 2016 election and played a major role in Clinton's defeat. The overhyped stories about Clinton's emails, the ridiculous hysteria about her health and the snarky comments about her perfectly normal voice all fed stereotypes that women, especially ambitious women, are too corrupt, fragile or shrill to compete with men for power. The misogynistic undertones (or overtones) of much campaign coverage helped drive down Clinton's lead just enough that a few districts in a few states tilted the Electoral College vote towards Trump, even as she won the popular vote by a substantial margin.

“When you’re portrayed in a sexist way, it definitely hurts you," Celinda Lake, a leading political strategist and pollster who works primarily for Democrats, told Salon. "Your favorability ratings go down."

Longtime political commentator Jonathan Chait has suggested, however, that the best response to sexism for female politicians and their supporters is to pretend it's not happening. In a concern-trolling post for New York magazine, Chait denounced feminist media outlets for running articles shaming men who appeared to talk down to Kamala Harris, saying this "removed Harris of her agency, and reduced her to the status of victim." He also criticized Gillibrand for speaking out about her own experiences of sexual harassment.

"Within the ecosystem of the left, demonstrating that you have suffered harassment or microaggressions is a big win," he writes, dripping with condescension about what he calls the "victim trap." "But among the country as a whole, the dynamic is very different."

It's understandable that some men, particularly those who must seek safe spaces when exposed to terms like "microaggression," balk at hearing women talk about sexism and would prefer them to be silent. That may make it easier for men to pretend that sexism isn't a significant problem in politics. But does simply ignoring the issue help female candidates boost their ratings, as Chait implies?

No, Lake said. Quite the opposite: Her research suggests it helps women to speak out in response to sexist attacks.

In 2010, Lake's company, Lake Research Partners, commissioned a nonpartisan study on behalf of She Should Run and the Women's Media Center. "Acknowledging and responding to sexist mistreatment by the media," it found, can help "repair damage inflicted on a female candidate."

This was true, it turned out, even if the voters didn't know about the original sexist mistreatment.

What "is implicit in Jonathan’s comments, and is always part of the strategy that political consultants are concerned about," Lake continued, is the idea that "you don’t want to draw attention to this stuff." For instance, no one would likely know about Gillibrand's experiences of sexual harassment if she hadn't brought them up, and the concern is that by saying something she could come off as a "victim" and therefore weak.

“Frankly, I used to counsel candidates this way," Lake said, joking that consultants don't want their candidates "running around being Helen Reddy." But it turns out that actual voters don't necessarily feel that way. In her firm's tests, even a group that hadn't heard about an original sexist insult rated the female candidate more highly if she denounced it.

This effect also holds true for third parties, i.e., all those feminist writers whom Chait suggests exploit victimhood as "a prime source of authority" and a way of "establishing one’s intersectional credentials."

(For what it's worth, I would have preferred not to have been sexually assaulted when I was 20, even though it does, I suppose, give me what Chait clearly considers unearned authority on the subject.)

Refusing to stand up to sexism doesn't make you look strong, Lake said, but rather the opposite. Voters "feel that if you won’t fight for yourself, how the heck are you going to fight for me?"

It does matter how a candidate stands up to sexism. Lake's research suggested that the candidate needs to tie her response to a broader issue that reflects voter concerns. For instance, a candidate could pivot, calling the sexism a cheap distraction from real concerns. Or she could point out that this kind of sexist attack models bad behavior for girls or could discourage other women from running for office. All of these responses polled well and kept the candidate from looking whiny.

It's noteworthy that this is exactly the strategy Gillibrand used in the GQ article that Chait derides: She both ties her experience to those of other women (saying women "understand that their voices really do matter") and brings up the threat to children ("I don't want my children to even think in those terms").

Certainly, Republican strategists understand that calling out the perceived sexism of your political opponents can pay off. Even though comedian Michelle Wolf never actually made fun of Sarah Huckabee Sanders' looks during last weekend's White House Correspondents' Dinner, Republicans and their lapdog friends in mainstream journalism pretended they had heard sexist jokes anyway.

This was also evident in Hillary Clinton's presidential campaign. When Clinton or her defenders punched back against sexism, it usually helped her in the polls. Her numbers rose after the press called out congressional Republicans for their condescension to Clinton during the endless Benghazi hearing in October 2015. She also got a bump in the polls after criticizing Trump for his treatment of women in the first presidential debate. On the other hand, the attacks on her emails and rumors about her health were more difficult to identify in public as clearly sexist, and she was unable to respond to those effectively.

Even short-time Republican candidate Carly Fiorina got a boost from this dynamic. After Trump made fun of her looks and she responded by saying, "I think women all over this country heard very clearly what Mr. Trump said," during a CNN debate, Fiorina enjoyed a brief surge in Republican primary polls.

Of course, it's wise for candidates to be judicious in calling out sexism and to make sure they connect that response to a message about serving the voters. But ultimately, there seems to be no reason to fear that speaking out against sexism will make a politician look weak.

Regardless of what Jonathan Chait may believe about the alleged attention-seeking behaviors of progressive women, it's stressful to speak about these experiences, even relatively minor ones, precisely because it makes many people uncomfortable. But it's necessary: Only speaking out can bring hope of real change. And it also might help female candidates win.