Rudy Giuliani claims America will rally behind Ivanka Trump, who is "a fine woman" 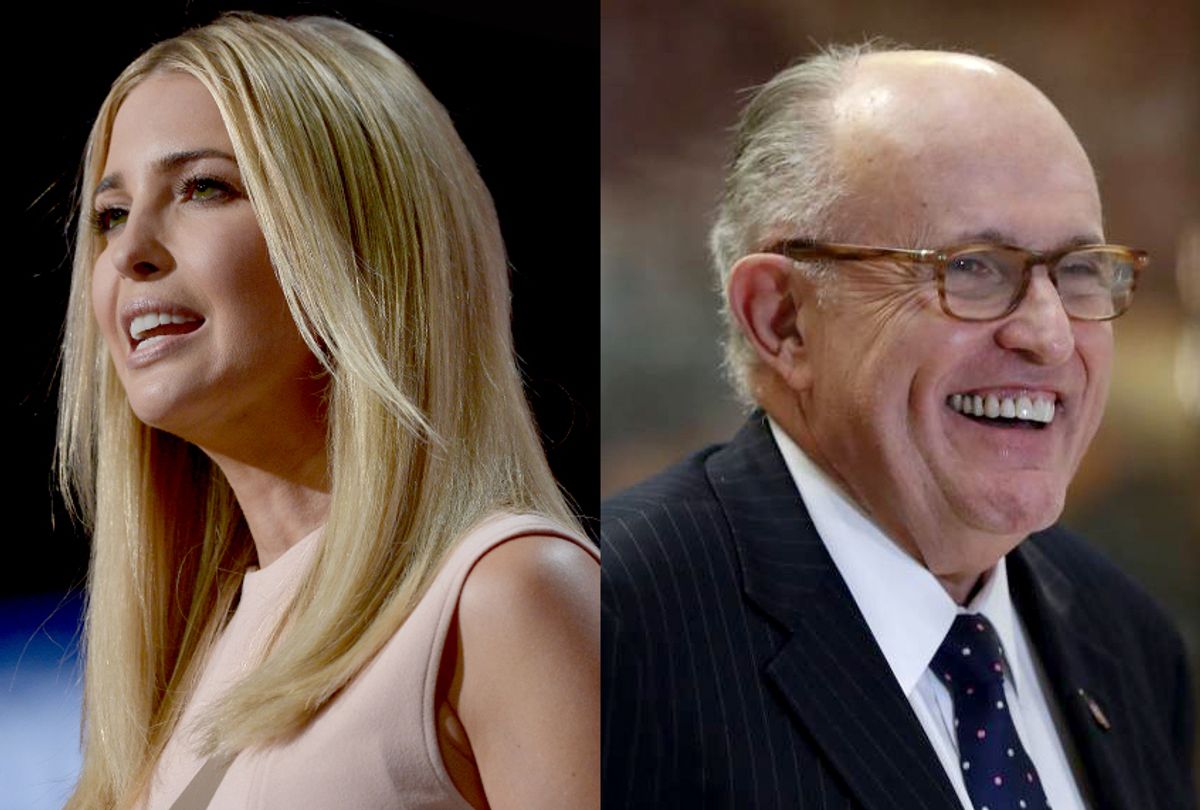 During his controversial Wednesday evening interview with Fox News' Sean Hannity, former New York City Mayor Rudy Giuliani — who is currently heading President Donald Trump's legal team — wound up offering a sexist defense of the president's daughter that inadvertently confirmed both she and her husband, Jared Kushner, could be facing legal trouble.

"Ivanka Trump? I think I would get on my charger and go right into – run into their offices with a lance if they go after her," Giuliani told Fox News host Sean Hannity when asked about the possibility that the Mueller team would investigate or even prosecute the president's eldest daughter.

Hannity's question came in the aftermath of a report by Politico which speculated as to why Ivanka Trump, despite being present as an adviser during many of the controversial decisions currently rollicking her father's presidency, has not seemed to have been targeted by Special Counsel Robert Mueller's probe. Ivanka was present when Trump made his controversial decision to fire former FBI Director James Comey as well as when the campaign tried to spin the revelation that her brother, Donald Trump Jr., had met with a Kremlin-connected lawyer to obtain "dirt" on Hillary Clinton. The article presented a number of possible explanations for Mueller not pursuing Ivanka Trump: That she may be a target of the investigation itself or that, because Trump could try to whip his supporters into a frenzy if Ivanka is called in and perhaps even try to pardon Mueller's witnesses or fire the special counsel, Mueller is waiting until the last possible second to "poke the bear."

In his responses to Hannity's questions, Giuliani seemed to confirm that Trump would indeed try to turn his supporters against Mueller if Mueller called in his daughter.

"If they do Ivanka, which I doubt they will, the whole country will turn on him. They are going after his daughter?" Giuliani asked Hannity.

As of March, Ivanka Trump's unfavorable rating has increased by 10 percentage points, from 33 percent in January 2017 to 43 percent at that time, according to an Economist/YouGov poll. Her favorability rating remained static at 42 percent during that same period.

While Giuliani might be overestimating the public's affinity for the president's daughter, when Hannity asked about Kushner, the president's son-in-law, Giuliani defended Kushner's character before making the seemingly chivalrous (but actually chauvinistic) argument that men are more "disposable" than women.

"Jared is a fine man, you know that," Giuliani told Hannity. "But men are, you know, disposable. A fine woman like Ivanka, come on!"

Although Giuliani painted Ivanka as an innocent, the president's daughter has actually faced potential legal trouble in the past. Setting aside her possible involvement in her father's ongoing political scandals, Ivanka Trump and Donald Trump Jr. came close to being indicted in 2012 when the Manhattan district attorney's office began looking into whether they had misled investors about the success of condominiums being sold at their Trump SoHo project, according to The Guardian.

There were also reports in March that American counterintelligence officials were looking into Ivanka Trump's involvement in a Trump International Hotel and Tower in Vancouver, Canada, which occurred while her father was president. Yet even Ivanka Trump's activities before her father's presidency — such as her involvement in a 2006 licensing deal with Felix Sater, a wealthy businessman who claimed to have connections to Vladimir Putin — have come under scrutiny in light of Donald Trump's ongoing scandals.

Jared Kushner, meanwhile, is being actively probed by Mueller over whether his business talks with foreigners wound up impacting White House policies, according to CNBC. He has also come under fire for repeatedly submitting incomplete and/or inaccurate security clearance forms and for trying to establish a backchannel with Russia.