Fox News host Neil Cavuto, despite supporting many of the president's policies, blasts Trump for his dishonesty 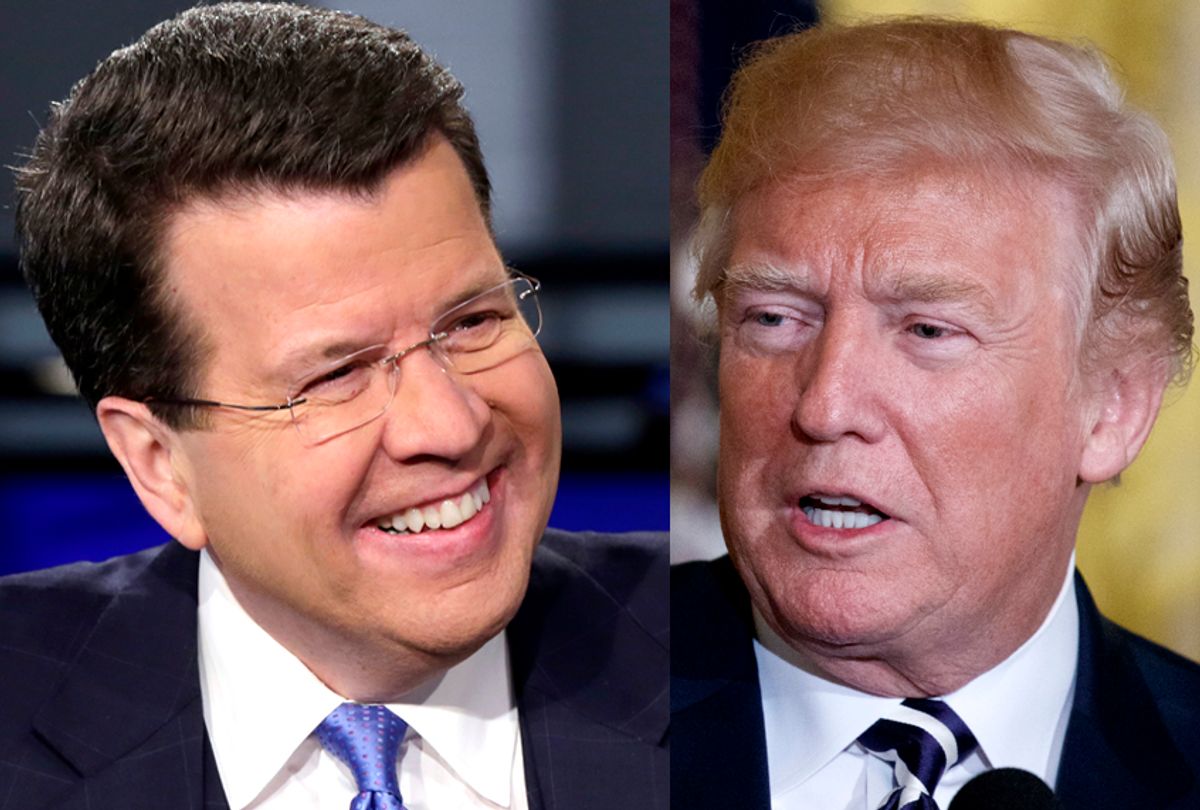 Fox News host Neil Cavuto, despite being an ostensible supporter of President Donald Trump, couldn't hold back from giving the president a tongue-lashing on Thursday night.

The Fox News host, who has been with the network since it first aired in 1996, opened by describing how Trump frequently brands his critics in the media as "fake news," even though the president's own words have often proved to be unreliable.

"Now, I’m not saying you’re a liar. You’re the president. You’re busy. I’m just having a devil of a time figuring out which news is fake. Let’s just say your own words on lots of stuff give me, shall I say, lots of pause," Cavuto told the president in his broadcast, according to a transcript by The Washington Post.

- Trump insisting that the Russian government hadn't interfered in the 2016 presidential election, even though many of Trump's fellow Republicans had to insist that they had.

- Trump denying that he had claimed Russia hadn't interfered in the election, when he had.

- Trump describing his tax cut as the biggest ever in American history, when in fact it wasn't.

- Trump claiming that the tax cut would cost him a fortune, when in fact it will make him richer than before.

- Trump saying his approval ratings aren't as bad as those of other presidents at this point in their administration, even though they're lower than those of his four immediate predecessors (George H. W. Bush, Bill Clinton, George W. Bush and Barack Obama).

- Trump telling the public that former Secretary of State Rex Tillerson wasn't on his way out, when in fact he was.

- Trump saying that former Chief of Staff Reince Priebus wasn't going to leave the administration, when in fact he was.

- Trump supporting his former Director of the National Economic Council Gary Cohn, even though he was on his way out.

- Trump declaring support for his former chief strategist, Steve Bannon, even though he was also on his way out.

- In reference to Trump's attorney general: "Swore by Jeff Sessions until you started swearing at Jeff Sessions."

- Trump making it seem like his legal team was "locked in place" until lawyers John Dowd and Ty Cobb departed.

- Trump denying that he had been thinking of firing special counsel Robert Mueller, even though he now says he's thinking of getting involved at the Justice Department.

Cavuto eventually went on to praise many of the president's policies as "good," singling out the possibility that he will create peace between North Korea and South Korea as "remarkably good." At the same time, Cavuto insisted that the president kept stepping on his own agenda by repeatedly putting his foot in his mouth.

"It is not that these exaggerations and omissions and misstatements are now and then. More like now and then something else. Always something else," Cavuto opined, before continuing with another list of Trump misstatements that included claiming he had signed more bills into law at this point in his presidency than any of his predecessors (he hadn't) and mischaracterizing the state of the national debt during his time in office.

Cavuto also pointed to erroneous statements that the president needed to correct but had not, such as arguing that there had been voter fraud in Virginia and New Hampshire, that millions of undocumented immigrants had voted in the 2016 presidential election or that he had won one of the biggest electoral college landslides in modern history (none of which are true). "You are right to say some of them [the press] are out to get you. But oftentimes they’re using your own words to bash you. You probably might not care. But you should. I guess you’ve been too busy draining the swamp to stop and smell the stink you’re creating. That’s your doing. That’s your stink. Mr. President, that’s your swamp," Cavuto concluded.

It is noteworthy that Cavuto, a man who has used his platform to promote many of Trump's policies and lambast his critics, is willing to openly call the president out on his misstatements. While Fox News hosts like Shepard Smith and Megyn Kelly (before she departed) have been willing to blast the president in the past, Cavuto is not one known for a willingness to rock the boat in this way. This should not be mistaken for a denunciation of the president himself — Cavuto emphasized several times that he was not implying the president did these things deliberately or that he was evil — but rather an acknowledgment, from a popular conservative pundit, that the president's own words have made him into a political liability.

The real question is whether Trump will react to this... or if he can. Considering that many of Trump's own supporters have told him to not speak with Mueller out of concern that it would be a "perjury trap," it stands to reason that many of them are not sure the president could stop himself from lying, exaggerating, embellishing and making serious error of omission, even if he wanted to do so. At the same time, Cavuto's central thesis seems to be that regardless of whether the president wants to do this, he needs to do this.