I love Kanye West. He loves Donald Trump (or claims to). It's a puzzling equation

Kanye West is the perfect distillation of greed, narcissism and celebrity culture. Well, along with his new BFF 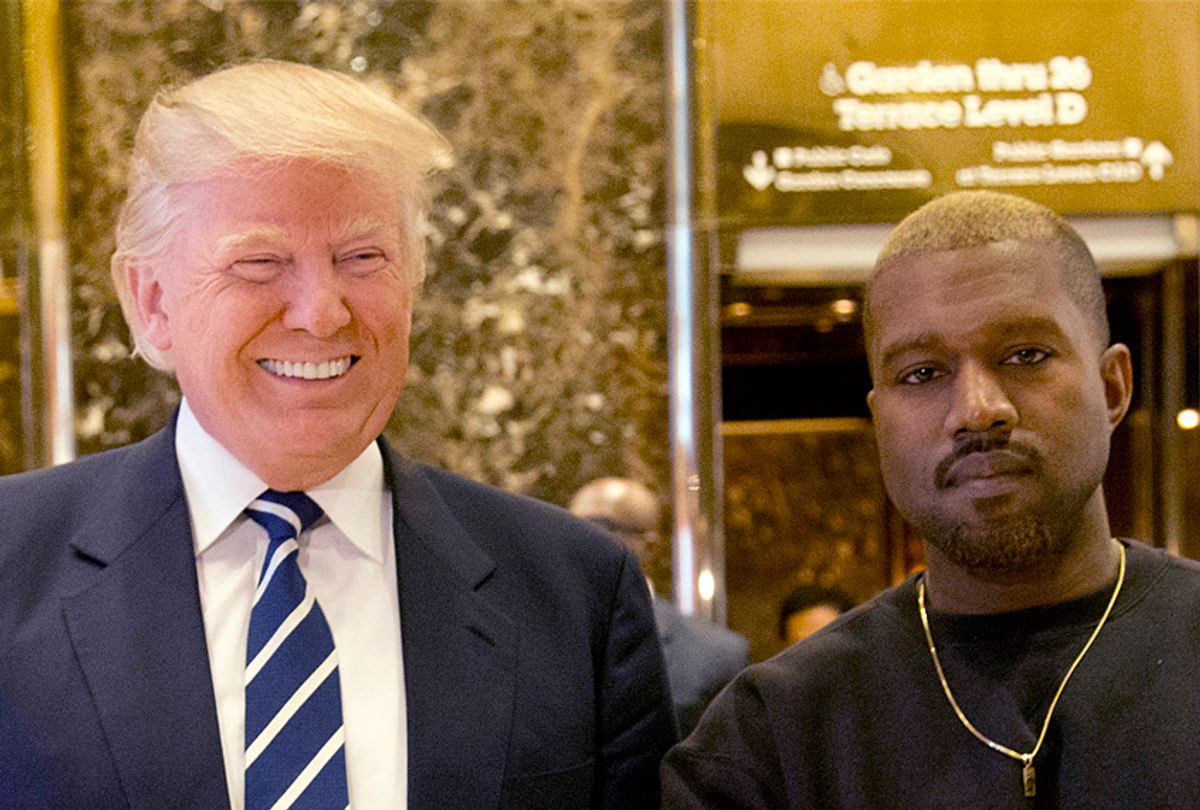 I love Kanye West ... but not for the reasons you may think. Let me explain.

First, you must understand that Kanye West does not really exist. He is a celebrity product, an echo and reproduction of the original and presumably "authentic" person who was born Kanye Omari West on June 8, 1977, in Atlanta. Thus, Kanye West the rapper, producer and professional famous person is a type of shadow; his detractors are in many ways wasting their time trying to grapple with a chimera.

I don't love Kanye West because of his music. He is a gifted producer but a subpar lyricist whose marginal talents have been amplified by ghostwriters.

I most certainly do not love Kanye West because of his knowledge (or lack thereof) regarding African-American history and the black freedom struggle. Several days ago to much controversy, Kanye West told TMZ that "When you hear about slavery for 400 years ... for 400 years? That sounds like a choice." He also continued with, "You was there for 400 years and it's all of y'all? It's like we're mentally imprisoned."

Kanye West is not the last black person to believe and say such brazenly stupid things. He also will not be the last.

I am reminded of a lecture I attended some years ago where the late James Cone, an intellectual titan and the father of black liberation theology, observed that some of the most difficult students to teach on questions of the color line were those who happened not to be white. Why? Because black and brown students often believe that because they were born into a certain body at a certain point in time, they have special knowledge and wisdom that makes it unnecessary for them to engage in serious study of the color line.

In the ways that matter, Kanye West is utterly common and banal in his claims to be a "free" black man who would never have been a slave. Such tripe is the common banter of semi-private black spaces like barbershops and hair salons, now (unfortunately) amplified across the world for all to hear.

No, I love Kanye West because, like his supposed friend Donald Trump, he exemplifies what philosopher Jean Baudrillard labeled as "hyperreality": this is a condition of reality where the boundaries between the simulated or imaginary and the real have been torn away, the original substance is lost, and we are left unable to discern true reality even if it somehow returned.

We see this in an America which in many ways has lost the ability to determine what is "true" and what is "fake," and where lies are now labeled as mere "untruths" or "disagreements." As with Trump, Kanye West is the human distillation of America's social pathologies of greed, narcissism and a celebrity-driven culture of distraction and emptiness. Hyperreality is the state of being where these social pathologies exist, and through which they are mediated.

Ultimately, Kanye West is just one more character caught up in the orbit of the human black hole Donald Trump, in a malignant reality where the absurd is now the quotidian. Mark Twain could not have penned such satire, and had the good sense not even to try.

Cultural theorist Neil Postman predicted much of this in 1986 when he wrote: “Our politics, religion, news, athletics, education and commerce have been transformed into congenial adjuncts of show business, largely without protest or even much popular notice. The result is that we are a people on the verge of amusing ourselves to death.”

In this hyperreal moment there are other overlaps between Donald Trump and Kanye West as well. Both have deftly manipulated the American outrage machine for their own personal gain and amusement. Historian Peter Gordon references Frankfurt School thinker Theodor Adorno in arguing that "Trumpism cannot be interpreted as an instance of a personality or a psychology; it would have to be recognized as the thoughtlessness of the entire culture." This thoughtlessness, he continues, "marks not just Trump and his followers but nearly all forms of culture, and nearly all forms of discourse."

The eclipse of serious journalism by punchy soundbites and outraged tweets, and the polarized, standardized reflection of opinion into forms of humor and theatricalized outrage within narrow niche-markets makes the category of individual thought increasingly unreal. This is true on the left as well as the right, and it is especially noteworthy once we countenance what passes for political discourses today. ... The new media forms have devolved into entertainment, and instead of critical discourse we see the spectacle of a commentariat, across the ideological spectrum, that prefers outrage over complexity and dismisses dialectical uncertainty for the narcissistic affirmation of self-consistent ideologies each of which is parceled out to its own private cable network.

This profound alteration of public discourse into performance is why the Trump phenomenon "remains so difficult to comprehend," Gordon argues.

It is true that Trump says outrageous things and that (as his champions might say) “he tells it like it is.” But the strange aspect to this candor is that one cannot get over the impression that he hardly means what he says. He is as likely to reverse his opinion the next moment and deny what he has just said. Even those who support him will say that one shouldn’t take offense because this is just Trump being Trump. ... [T]he authenticity of his performance is precisely the performance of authenticity, rather than the candor of somebody who is announcing without embarrassment what everyone already thinks.

As Kanye West and Donald Trump distract the American people with their antics, our democracy continues to be further imperiled. Trump has again threatened to take over the Department of Justice. Polls indicate that Republican voters believe the absurd proposition that Trump is honest and does not lie, while it is the news media who are the real enemies of democracy.

None of this is to suggest that popular culture does not matter. My claim is exactly the opposite. Popular culture is a powerful barometers for measuring the public mood, understanding the collective subconscious and uncovering the values and ideologies that move a society. The power of popular culture includes its ability to beguile the public with the "performance of authenticity" where questions of sincerity and authenticity are rendered null and void. This links Donald Trump and Kanye West together. One of them is profoundly dangerous and the other no more than a failed trickster, but each can see in the other a highly skillful performer.